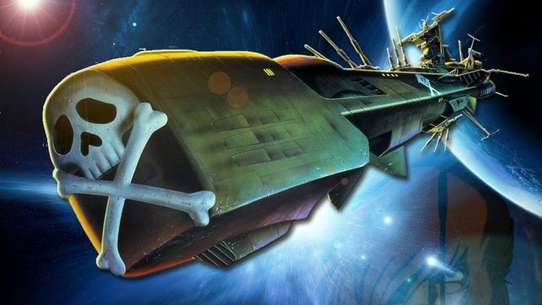 The BEST episodes of Arcadia of My Youth: Endless Orbit SSX

At the end of Arcadia of My Youth Capitain Harlock and the crew of the space ship Arcadia had been banished from Earth. The Earth, as well as many other planets in the universe had been taken over by the Illumidus, a race of destructive humanoids who ruin, enslave or destroy almost any inhabitable planet they come across. In "Endless Orbit SSX" Harlock battles the Illumidus while searching for a mythical "Planet of Peace" where all the peoples of the universe can live freely and without war.

Searching for answers, the Arcadia visits a space station devoted to transmitting information.

The Arcadia is badly damaged and Tochiro is ill. But could his mad rantings be the ship's salvation?

The Arcadia needs repairs, but a complicated part is needed. Tochiro knows of one man who make it, but that man lives on a planet ruled by the Illumidus.

#4 - A Lullaby in Combat Space

The Arcadia answers a distress call sent by a ship under attack by bandits.

A cyborg found on a derelict ship is taken aboard the Arcadia, but crew's pity on the girl could be their undoing.

The Arcadia, again badly damaged, is forced to hide in the waters of an ocean planet where the pressure is so great it will implode the ship if they don't repair it in time.

A young bounty hunter is after Captain Harlock, but when they finally meet, things don't go as planned.

Rebi sneaks a cat on board, an act which threatens to doom the whole ship.

Emeraldas has been surrounded by the Illumidus, and the only way to get the Arcadia there in time is though a dangerously radioactive part of space.

#10 - To Our Mother Planet, Earth!! Be Eternal, Space Heroes

Both Harlock and Mr. Zone have been given the Fire of St. Aqule, which one will triumph?

The glowing golden ball continues to be a mystery, and Mr. Zone gains an armada.

#12 - Monster Tornado!! Communications are Down

Rebi's cat breaks Tochiro's radio, sending him storming off the ship. Rebi, Tadashi and Dr. Ban go after him, and soon all four of them are stranded on a dangerous planet.

Captain Harlock is finally in site of his goal, but will Tochiro be there when he reaches it?

Tochiro is ill, but Dr. Ban doesn't have the right chemical to test how ill the little man is. Kei risks travelling to an Illumidus-controlled station to get it.

Emeraldas has an unpleasant reminder of how she got her scar

#16 - The Boy and his Mother on the Planet of Steel

After a trip to a planet covered in water, an explosion causes the full water tanks of the Arcadia to empty, forcing them to make an emergency landing on a planet made of metal.

An act of sabotage has damaged the Arcadia, and Kei has gone missing.

It's Christmas and all little Rebi wishes is to see her father again.

Mr. Zone has built a ship that he is sure will destroy the Arcadia once and for all.

The crew of the Arcadia try to take much needed shore leave on a neutral planet. They are forced to leave because of the Illumidus' treacherous and destructive ways.

Mr. Zone tricks Captain Herlock into the deadly grasp of a mad and murderous computer.