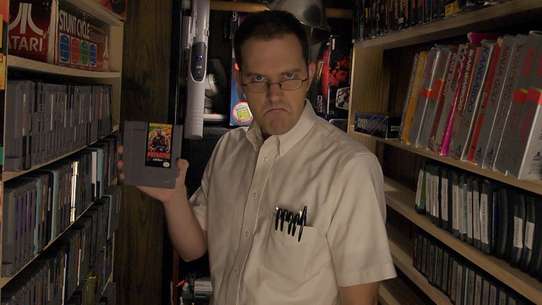 The titular Nerd character is an ill-tempered and foul-mouthed video game fanatic. He derives comic appeal from excessive and inventive use of profanity, frequent displays of explicit gestures, and heavy consumption of beer, particularly Rolling Rock or Yuengling, to "soothe the pain". A particular characteristic is his favorable comparison of extremely repulsive and painful, usually firmly scatological, acts to playing the games he reviews. Varying amounts of physical comedy are mixed into the verbal abuse.

The Nerd tries to beat one of the most difficult games in existence!

The Nerd finishes up his rant on the crap that is Ghostbusters games only to have a small surprise. A game... he likes?!

Even before the ESRB existed, you've got to ask yourself, "How can games like these ever be made!?"

Released to coincide with the new Rocky movie, ROCKY BALBOA, December 2006. First review of a NON-NES game. First time "The Angry VIDEO GAME Nerd" was used in the theme song, instead of "Nintendo Nerd".

On the spookiest day of the year The Nerd finds himself in a battle against a crappy game.

What will happen to the BatNerd? Will the Joker have his way?

Possibly the most hilariously bad game ever.

The Nerd continues his assault on old video games that are now summer blockbusters with his take on the 80's, 90's and maybe 2007 hit, Die Hard.

It's time to look at a SNES classic--and a game that's not, exactly.

The Nerd was on the wrong console all along.

One of the most epic adventures in video game history.

Time for a rematch!

The Nerd pays tribute to the Game Boy, the handheld console that outlasted the Nintendo, Super Nintendo, and N64. And, much like those consoles, there was a boatload of needless accessories to go with it.

The Nerd grapples with the Game Graphic Glitch Graemlin.

This game contains one of the most awesome things The Nerd has ever seen.

One of the greatest magazines in history, the Nerd revisits his memories of Nintendo's paper propaganda.

The Nerd is back to prove that not all games are good movie to game adaptations like Batman. But Ghostbusters...it's just AWFUL!

Yet another add-on to the Genesis that tried to extend its life but ultimately just helped pull the plug.

The chilling conclusion to The Nerd's Christmas adventure. Will he have a happy holiday season after visits from his past, present and future?

Wow! It's like playing a movie... except all the movies are really, really bad. Complete with full length Nerd intro.

He just couldn't get over how bad it was. In part two of his 'busters trilogy, The Nerd takes a look at some other console incarnations of this craptastic movie to game adaption.

A game about a classic comic book character could've been one of the greats... too bad it sucks donkey balls.

The Nerd has snapped! He finally does what we've all thought about doing once in our lives... beat the hell out of that wascally wabbit.