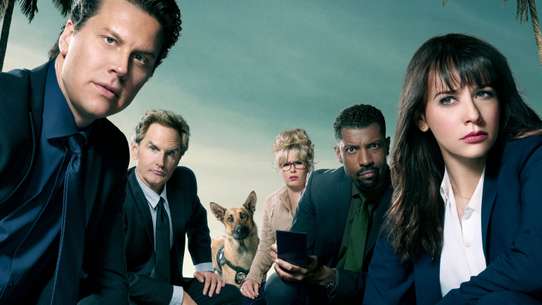 The BEST episodes of Angie Tribeca

Lone-wolf detective Angie Tribeca and a squad of committed LAPD detectives investigate the most serious cases, from the murder of a ventriloquist to a rash of baker suicides.

A naked woman crawls out of a child's backpack and doesn't remember a thing. Why? She couldn't tell you. Tribeca helps her trace her steps while Geils and Tanner track down a murderer on the run from prison.

The thrilling conclusion to Season 2. Every question answered. Every twist explained. A logically and emotionally gratifying finale that is sure to silence all critics and guarantee a third season.

In the season premiere, Angie Tribeca retires to become a stay at home mom. Show's over, right? Wrong. A trophy hunter goes missing and she's back on the case, which will definitely take nine more episodes to solve.

Illegal pet ferrets are leaking into California, and the lieutenant could not be sicker about it. Tribeca and Geils follow a trail that naturally leads them to a high stakes poker game. The only problem? The Fish & Game Division is claiming jurisdiction.

Tribeca has a hunch that the trophy hunter hunter has struck again, this time in New Orleans. It’s all gators and gumbo as Tribeca heads to the Big Easy in hopes of catching the killer before he strikes again. But everything is not as it seems to be.

People are still solid, but Dr. Scholls turns up missing, and the serial killer is still on the loose. Meanwhile, Lt. Atkins has a beautiful outdoor wedding. Do the two converge? That would tie things up nicely in the end.

Geils has been kidnapped and the lieutenant is inches from death though you wouldn't know it from watching the episode. Tribeca will stop at nothing to save Geils before time runs out. The only problem? The 256 character limit on these descriptions makes i

A brilliant robotics specialist is found dead in his lab. No one knows who killed him, which makes Tribeca's job a lot harder. The only one who can offer any insight into the case is the victim's magnetic assistant, who takes a liking to Geils.

When an outbreak of a lethal virus threatens to liquefy everyone in Los Angeles and perhaps the world, the team realizes this might be the season's serial killer's magnum opus.

When a sultry woman convinces Geils to investigate whether her husband is having an affair, he dons his P.I. hat, which lands him in trouble. Think Chinatown, because that's where this story comes from.

Tribeca's been hoarding vacation days and the lieutenant is sick about it. Ordered to take a day off, Tribeca dabbles in civilian life while Tanner and Geils solve a murder on a golf course. What's not a problem? Bill Murray agreed to be in this episode.

When a middle-aged white man is murdered in New York, the team goes there based on Tribeca's belief that the serial killer they've been tracking is the culprit. No one's on board with her theory, but as the main character, she drives the plot.

When a beloved college badminton star is the suspect of a hit-and-run, everyone turns a blind eye, because, as we all know, L.A.'s a badminton city. But not Tribeca and Geils, who find "fault" with the case and won't "let" it go.

Atkins assigns a romance novelist to aid Geils and Tribeca in their attempt to bust an organ thief at a local hospital. Why? Why not? Does anything have to make sense anymore? Or can shows just do whatever they want with no explanation?

#16 - This Sounds Unbelievable, but CSI: Miami Did It

Natalie Portman's in this one, but also a man falls from the sky and the team investigates a lead in space.

#17 - The Famous Ventriloquist Did It

A ventriloquist is dead, and the lieutenant is just sick about it. On the case, Tribeca delves into the salacious world of American ventriloquism. The only problem? Geils always wanted to be a ventriloquist, which might not sound like a problem but is.

A massive conspiracy is set in motion after a seedy dating website is hacked for seemingly vague reasons.

Another passenger arrives dead at LAX, and the lieutenant has finally been diagnosed with bacterial meningitis. The gang goes undercover aboard an airplane to catch the killer in the act. The only problem? The lieutenant doesn't believe in antibiotics.

Tribeca and Geils are poking around into a prostitution ring, and the lieutenant is just sick, mostly about it. Afraid of what they might uncover, he orders them to stop. The only problem? "Stop" isn't a word in Angie Tribeca's vocabulary.

Tensions are high between Tribeca and Scholls after a sushi chef's skull is found in the ocean because of the love triangle they have with Geils.

A priceless work of art is missing, and the lieutenant is extremely sick. Tribeca and Geils search and high and low and in the middle to recover the stolen painting. The only problems? The demons in Tribeca's past and the lieutenant's lingering illness.

Geils and Tanner investigate the mysterious death of a reunited boy band member while Tribeca finally meets with Sgt. Pepper. Why? Seemingly, he's connected to Mayhem Global, but what is Mayhem Global and why do they keep bringing it up?

A member of the Coast Guard is murdered, and somehow Tribeca and Geils connect it to Mayhem Global. Why? What is the point of all of this? What is it all leading to?