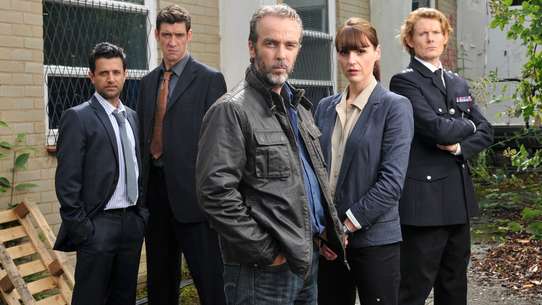 The BEST episodes of A Touch of Cloth

Hannah plays DI Jack Cloth, who is called in to investigate an apparent series of serial killings alongside his new partner, DC Anne Oldman, described as a "plucky, no-nonsense sidekick". Playing with the cliches and conventions of British police dramas, subplots include Cloth dealing with visions of his dead wife and the bisexual DC Oldman coming to grips with her feelings for both her female fiancee and Cloth.

Going even deeper undercover, Cloth learns that Macratty's big plan has got even bigger, taking on a heist for the mysterious Big Man.

DCI Jack Cloth's brother, Terry, has been killed. The pair weren't close, in fact, they were estranged, but, you know, it still hurts.

As the body count continues to rise, Cloth closes in on the killer. But there's a horrific realization that the culprit is far too close to him for comfort.

Cloth has quit the force, never to return. Well, until a bank robbery goes wrong. But things are awkward at the station, particularly with ACC Tom Boss back at work.

Booze addled and widowed loner, DCI Jack Cloth continues his struggle to hold himself together while solving grisly murders and suffering from the death of his wife.

DCI Jack Cloth and DC Anne Oldman investigate a series of gruesome murders with the help of pathologist Natasha Sachet and Tom Boss.