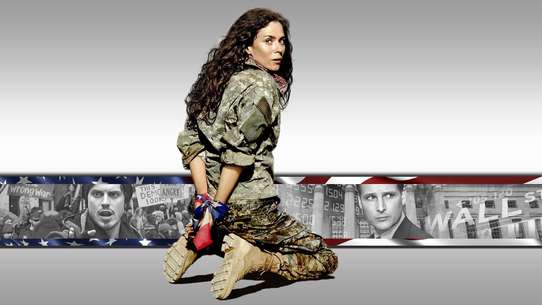 The BEST episodes of American Odyssey

Three families are torn apart when a stranded female soldier, a disillusioned corporate attorney and a disrespected political activist are pulled into the same shocking international military conspiracy.

Now captive in Bamako, Odelle must prove her value to an Ansar Dine interrogator. Harrison reluctantly turns to his famous journalist father for help when he learns he has a connection to Colonel Glen. Peter finds himself in danger after uncovering new evidence against Societel.

Odelle reaches a détente with her Ansar Dine captor, as both Aslam and Frank Majors increase their respective efforts to find her. In New York, Peter discovers his investigation of Societiel Mining is being complicated by the involvement of a US Senator. Harrison prepares to deliver the eulogy at his late father's funeral, and Bob reveals that Randall's death is not all that it appears.

As the world discovers the truth about Odelle, she and Aslam find refuge in Barcelona with someone from Luc's past. But when Odelle finally has a chance to tell her story to reporter Isabel Rainey, she encounters an unavoidable obstacle. Meanwhile, back in New York, the truth about Societel Mining's misdeeds sends ripples through Peter's world and Harrison works to expose Osela.

Odelle tries to avoid detection while traveling through the desert with her Malian companion. Meanwhile, hacker Bob is reluctant to reveal evidence that Odelle is still alive, and Peter takes his suspicions about Societel to the Department of Justice.

On orders from Colonel Glen, Odelle makes her way to a secret CIA safe house, but soon realizes that Glen may not be acting in her best interest. In New York, Peter discovers that Joe is under "investigation" by Societel Mining, and his increasingly paranoid behavior disturbs his wife and daughter. Looking for clues about his father's murder, Harrison and Bob try to get in touch with Randall's last source.

While in Algeria with Luc and Aslam, Odelle gets used to a new life, only to ultimately be brought back to reality. Meanwhile, back in New York, Peter learns that Sophia Tsaldari is being forced to work with Jennifer Wachtel. Harrison uncovers a clue after Ruby's death.

After seeing Aslam's picture on Shakir Kahn's television show, Odelle is finally reunited with her young friend. Maya's relationship with Cameron deepens, worrying Peter, who believes that the young man is a Societel Mining spy. Still hot on his father's trail, Harrison inquires about a story his father never finished.

Peter breaks into a Societel Mining warehouse to uncover more evidence on the company's misdeeds, but the mission does not go as planned. Isabel Rainey comes to Club Cachette to hear Odelle's story, but Odelle and Aslam are forced to run, leaving Shakir Khan to fend for himself. Harrison and Bob finally make contact with Yusuf Qasim, a man who may have answers to their questions.

Odelle is held hostage by an enigmatic shaman. She is then taken on a bizarre trip, during which she must face the ghosts of her past. Meanwhile, Peter's professional life and personal life take hits, and Harrison and Ruby embark on a romantic getaway.

Odelle and Aslam are hit hard by Frank Majors' attack on Shakir Khan. Meanwhile, a desperate Peter makes a deal with Societel Mining CEO Alex Baker, as his marriage reaches a breaking point. Bob gets closer to discovering Ruby's true identity, though what he discovers might not be enough to stop her relationship with Harrison. Also, Suzanne makes a new friend.

Odelle, Aslam and Luc hold an unconscious Frank in captivity. Meanwhile, Peter at last makes contact with Yusuf Qasim, and Ruby faces the reality that her mission is not yet complete.

Luc comes to Odelle and Aslam's rescue, and Odelle learns about the mysterious Frenchman's past. Back in New York, Sophia Tsaldari helps Peter get closer to Yusuf Qasim and further exacerbates the rift with his family. Bob tells Harrison the truth about Ruby, which has unintended consequences. Suzanne and Julia continue to bond, raising questions for both Ron and Col. Glen.