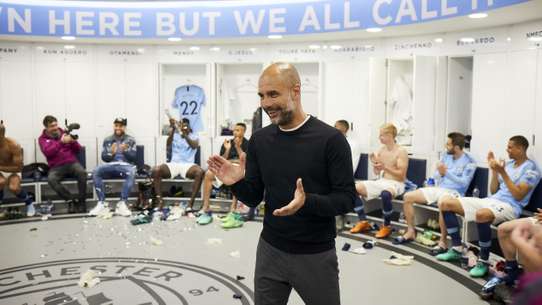 The BEST episodes of All or Nothing: Manchester City

In this ground-breaking docu-series, follow Manchester City F.C. behind the scenes throughout their Premier League winning, record-breaking ‘17-18 season. Get an exclusive look into one of the best global sports clubs, including never-before-seen locker room footage with legendary coach Pep Guardiola, and delve into the players’ lives off and on the pitch.

Guardiola is careful to maintain City's incredible run as they enter a relentless run of games over Christmas. Meanwhile, David Silva grapples with unexpected personal issues. Guardiola warns his players about Crystal Palace on New Year's Eve. City later travel to Anfield to play Liverpool, where they have not won for 14 years.

In 2017, City's new manager Pep Guardiola suffered his first trophyless season. In response to this, City open their chequebook for the next season, securing major name signings like Kyle Walker, Ederson Moreas and Benjamin Mendy. It is now a must-win season for City. Early on, they face tough games against Liverpool and Chelsea, and confront bad news surrounding a big new signing.

The season starts with City playing beautiful football. The derby is quickly coming up, and City brace themselves for the highly competitive game versus rivals Man United. Before then, the team endure a tough away game against Serie A leaders, Napoli, in the UEFA Champions League. Despite losing all away games in Europe last year, Aguero's renowned striker skills turn the tide.

City enter a defining week: a chance to reach the semi-finals of the Champions League and wrap up the Premier League - in record time - by winning against their Manchester rivals. However, Anfield proves difficult; Guardiola sees red mist. And the derby takes a shocking turn. Guardiola's tactics are brought into question. Can his style of football succeed in England?

City travel to Tottenham to try and regain their swagger. A shocking result back in Manchester triggers celebrations, with Kompany leading the charge. City are on the verge of breaking numerous records in the Premier League, though Guardiola refuses to let his team rest on their laurels. Midfielder Silva has one more reason to celebrate. The City bus makes one last journey.

Despite having a trophy in the bag and a big lead in the League, City persist. Pep's signature attacking style is on full show against Arsenal and Chelsea. City are still on for the treble, but the UCL draw presents a tricky tie against a familiar foe. A well-earned break gives the players an opportunity to rest in warmer climates.

Competing for four trophies starts to take its toll on City. As they play against lower division clubs in the FA and Carabao Cups, aggressive tackling proves particularly painful. Alongside a growing list of injuries, they pursue a big, last-minute signing and renew contracts with stars De Bruyne, Otamendi and Fernandinho.