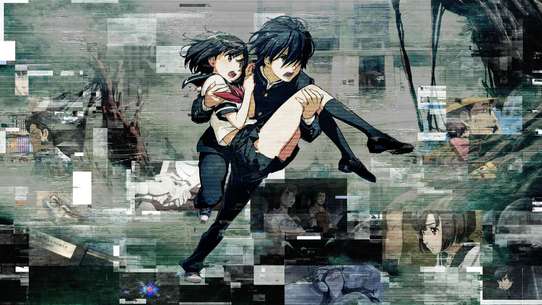 The BEST episodes of A.I.C.O. -Incarnation-

Set in the near future in Japan, year 2035. A major incident was known as "Burst" which was caused by researching artificial life. A certain AI called "Matter" has eroded the Kurobe Gorge. Entering the research city, which has been called as humanity's last hope, has been prohibited by the government. Two years later, Aiko Tachibana, a 15-year-old girl who lost her family from the incident, was told by a transfer student named Yuuya Kanzaki the truth that Aiko didn't know regarding a secret hidden within her body. The key to solve the mystery is said to be in the Primary Point, the center of Burst. When a boy and a girl, who bears the future of humanity, meet, what will be the new truth? // Produced by Studio Bones. The series premiered worldwide on Netflix. And has been licensed by Kodansha USA.

The CAAC Special Forces intercept the group to try to take Aiko back. Kurose realizes that Isazu's daughter Yuzuha is connected to the Matter.

The team reaches the biotech research facility at Primary Point, but Isazu manages to patch in a video feed to confront Kanzaki about his intentions.

The Divers confront Aiko and Kanzaki, but they agree to continue with the mission. Isazu becomes lab director and learns about Unit One.

At the surgical site, Yura admits his intentions changed with Aiko's decision. Kurose tries to sever the link between Yuzuha and her duplicates.

Kaede's showing off delays the group's progress to point K2, which they must reach before sunrise to enter Area Three. Isazu tells Kurose what he did.

Aiko has the chance to speak to her other self inside the Malignant Matter. Meanwhile, the human form Matter engulfs Yura, revealing Yuzuha.

Kanzaki takes Aiko to the Town, where her father's old colleague Kurose tells her the unbelievable: Her brain was transplanted into an artificial body.

Isazu establishes a link to the Matter so he can interrogate Yura. The JSDF prepares to incinerate the entire Area despite Nanbara's objections.

Two years after the mysterious Burst that killed her family, Aiko has nearly learned to walk again. But a transfer student's arrival upends her life.

The group clears the Gate just as the government orders an evacuation. Their first target is the Guillotine Shutter at K1, but the Matter is active.

Inside the Area, the group rests and resupplies at the camp. Nanbara gets a ride from Kurose, but she and Isazu appear to have their own plans.

The CAAC detains Aiko and Yuya, but the Divers manage to break them out. Though the Matter is active again, the group plans to head to Primary Point.