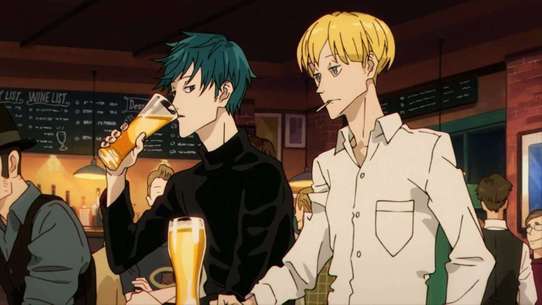 The kingdom of Dowa, which is subdivided into 13 states, is celebrating its monarch's 99th birthday. These 13 states have many agencies that are controlled by the giant organization known as ACCA. Within ACCA, Jean Otis is the second-in-command of the inspection agency. His agency has ten people placed in each of the 13 states, with a central office in the capital city. They keep track of all the activities of ACCA across the kingdom, and keep data on each state's ACCA office flowing toward the central office. Jean also often has business trips from the capital to the other districts to check on the situation and personnel there.

The time has come for Nino to tell Jean everything. He begins the very long tale by going 33 years back into the past, with the royal family involved...

#2 - The Truth Emerges in the Night Mists

Jean's next destination happens to be Dōwā District, where the royal house resides. Jean is deep in thought about the coup rumors in which he has become inextricably entwined, but there are too many variables for him to make sense of where things may be headed. Jean goes out into the city to buy Lotta presents, but it so happens that the king is also having his outing in the city, and there are many guards out on the road...

Jean arrives in Furawau District to conduct his final audit this round, where he receives the red carpet treatment from the Lilium family. Furawau residents are full of cheer, and their land is plentiful with blooming flowers, but Jean cannot avoid sensing invisible forces at work under the surface.

With preparations for the ACCA centennial anniversary cereonomy underway, Prince Schwan goes to Bādon to represent the Dōwā royal family in his father's stead. Meanwhile, the five chief officers, senior officials, and district representatives secretly gather in ACCA headquarters' central meeting room to make their own final preparations for the coup. The day of the ceremony, the district office plaza is full of citizens. The future of the kingdom is about to be decided...

While Jean is away on an extended trip to audit three districts in a row, there are signs of unrest that begin to close in on Lotta. Magie contacts Rail that Lotta is in danger upon learning of the events set in motion. Rail acts to protect Lotta, but the shadowy figures draw ever closer.

#6 - The Swirling Smoke of Rumors in the Castle

Director-General Mauve of ACCA headquarters invites Jean out to dinner, where she asks him for his aid in gathering more information about a brewing coup d'état. Meanwhile, rumors of a coup had reached even the Dōwān royal family. With Prince Schwan's coming of age commemorative ceremony in the works, the Five Chief Officers receive a request to attend the ceremony, as well as Jean as a representative of the Inspection Department.

#7 - Starfall in a City Without a Sky

Various wheels begin to turn at ACCA Headquarters as the prospect of a coup looms ever closer. After receiving yet another cigarette in Yakkara, Jean heads to Pranetta where only rocks and sand can be found and the denizens live underground. Despite living under such harsh conditions, the people of Pranetta are full of hope that their mining industry will succeed.

#8 - Smoldering Embers in an Isolated Nation

Jean has come to Suitsu District to do an audit. In Suitsu, excessive safeguards to uphold tradition and formality have restricted the exchange of goods and ideas between district residents and the outside world. Their isolation could be felt even by Jean, who then runs into residents discussing a coup by accident. Fearing disclosure, they kidnap Jean. Jean is about to learn a lot more about Suitsu residents and their opinions...

#9 - Overlapping Footprints in the Distance

Returning from his Suitsu audit, Jean asks his supervisor, Owl, about the status of his transfer request. Unfortunately, it seems unlikely to be approved anytime soon. As Jean leaves to go home, Chief Officer Lilium offers him a ride, where he tells Jean that he is being watched. Jean soon leaves for Birra District for yet another audit, where he comes to learn a troubling truth..

#10 - Where Pride and Train Tracks Lead

In Rokkusu District for an audit, Jean finds Grossular visiting his homeland. Jean has an honest conversation with Grossular about his thoughts on the coup rumors before he departs. Back in Bādon, the Inspection Department staff are abuzz with plans to celebrate the coming new year. Eventually, they decide to go to the party held at Jean's apartment complex. Jean welcomes the new year surrounded by his colleagues.

Constable Rail, the rookie agent of ACCA's Bādon branch, has a profound dislike for elite agents in ACCA headquarters and has it out for Jean. Meanwhile, feeling watched, Jean asks for his friend Nino's help. With rumors of a coup d'état circulating among the upper echelons of ACCA's hierarchy, Chief Officer Grossular announces at the Five Chief Officers meeting that he has obtained credible information about the coup.

Jean, vice-chairman of inspections, uncovers corruption on an audit. Uncovering the corruption may have saved Jean's division from budget cuts. After Jean's the division is safe, he begins to notice someone is following him.