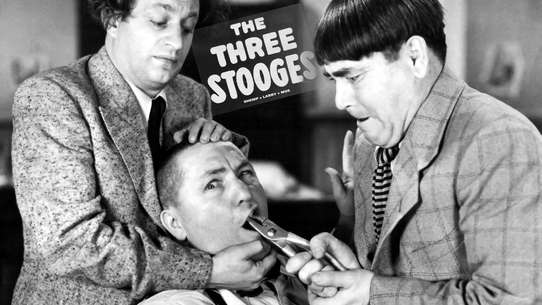 The BEST episodes of The Three Stooges

Legendary comedy act featuring three bumbling fools who find themselves in outrageous predicaments and take out their frustrations on one another violently.

The stooges are repairmen who get a job fixing the doorbell in large house which is the secret headquarters of some Nazi spies. They manage to ruin most of the house while working on the wiring and then subdue the spies and sink an enemy submarine by remote control.

The King of Moronica is overthrown and the Three Stooges are chosen to take his place. When three politicians from a small country discover there is no money in peace, they decide to hire a paperhanger (Moe) as a puppet dictator. Classic Stooge short was the first Hollywood film to satirize the Nazis and Fascists from World War II (predated Charlie Chaplin’s “The Great Dictator” by 9 months). Due to its historical significance, this was known as the favorite Stooge short of Larry, Moe and Jules White. Much of the short reflects the American Public’s knowledge of affairs in Germany at that time. First Stooge appearance by Stooge supporting player John Tyrrell.

The stooges are greeting card salesmen who are mistakenly inducted into the army after escaping from the jealous husband of one of their customers. In bootcamp their sergeant turns out to be the same man, whom they constantly vex and bewilder. When the boys are sent to the front lines and the sergeant is captured they must rescue him, which they do after doping themselves with laughing gas. At the end they get shot off into the sunset on a cannon shell. Greeting card salesmen Larry, Moe and Curly hide from an irate man in what they think is a bread line and find themselves inducted into military service. Title is a parody of MGM film “Babes in Arms” (1939) starring Judy Garland and Mickey Rooney.

Although circumstances force an over-matched Curly into a wrestling ring against a superior opponent, a spectator's perfume proves to be his secret weapon.

The stooges are artists living in Paris. When the landlord comes after the overdue rent, the boys skip out and wind up joining the French Foreign Legion. Posted to the desert, their assignment is to guard captain Gorgonzola from the natives. When the captain is kidnapped, the boys must disguise themselves as harem girls to infiltrate the chieftains hideout and rescue him.

The Stooges are the subject of a wager made by a professor who claims he can transform them into gentlemen.

The Stooges new jobs have them taking the census, from an afternoon society party to a local football game. Three gung-ho census-takers let nothing stand in the way of an accurate count,whether it be crashing a fancy bridge party,spiking drinks or invoking a riot at a professional football game.

The Stooges are lazy-bum husbands, inept salesmen, and misfit fugitives in a hospital.

The stooges' friend Jerry convinces them to buy an insurance policy on Curly and then have him act insane to collect. Moe and Larry put Curly on a leash and take him to the insurance doctor and have him act like a dog. But the plan backfires when the doctor wants to perform a brain operation on Curly.

The stooges are convicts about to be executed for some murders they didn't commit. The day before the execution they are tricked into marrying three rich girls who need husbands to collect a legacy. At the last minute the real murderers confess and the stooges are pardoned. The girls are now stuck with the stooges so they plot to get rid of them by making them become gentlemen. The girl's lawyer convinces them to throw a big party in the hope that the stooges will humiliate them and they can get a divorce. The boys do just that as the party degenerates into a wild pie fight. But the girls decide to keep the stooges and give their lawyer the boot.

The Stooges are Union soldiers who try to extract intelligence from a Confederate colonel.

The stooges work as gas station service men who end up running away from three professors on an ice cream truck. After thawing Curly out from sitting in the back of the ice cream truck the boys put on the professors clothes from their stolen luggage. The stooges are mistaken to be the professors by the college who is expecting them and they poorly pose as the professors and sing their famous ""Alphabet Song"". The real professors show up, but the ladies in the ""girls-only"" college end up getting their athletic program thanks to the stooges.

The Stooges are gold prospectors housed in the city dump. They are sent on a treasure hunt and dig through to a Federal Bank.

The Stooges are soldiers who unwittingly reenlist after exacting revenge on their commanding officer.

The Stooges inherit a women's boutique and fashion clothing for their swanky customers.

To escape the police, the stooges pose as plumbers and are hired to fix a leak in a fancy mansion. The Stooges are would-be plumbers and mistake pipes filled with wires for water pipes. One of the most popular Stooge shorts. Dudly Dickersons battle in the kitchen is a classic, as well as his famous line: “This house is sho goin crazy!” Later remade with Shemp in “Vagabond Loafers” (1949) and “Scheming Schemers” (1956).

When the Three Stooges agree to help Mrs.Lawrence prepare a fancy birthday party,their particular specially-an exploding,gas-filled cake - goes off with a bang.

The Stooges bungle their way through a murder trial as the star witnesses.

The Stooges are beer delivery men who crash the company golf tournament.

Three bumbling waiters try to help a clinically depressed little girl by locating her kidnapped father. The Stooges operate a restaurant and try to help a little girl who becomes ill when her father, a bail bondsman, disappears with a lot of cash and the Stooges have to fight gangsters.

The stooges go to Egypt in search of the mummy of king Rootin-Tootin for which a museum will pay a $5000 prize. They wind up in the mummy's tomb where they are harassed by some bad guys after the same objective. The villains, who have kidnapped a professor from the museum, want the jewels buried inside the mummy. When Curly accidentally destroys the mummy, Moe and Larry wrap him in bandages to fool the bad guys. They manage to rescue the professor and retrieve the real mummy of Rootin-Tootin who turns out to have been a midget

The Stooges are firemen who irk their captain.

The Stooges propose to their girlfriends for the 100th time, but when their father won't let them marry his daughters, the Stooges go on a sit-down strike. After 3 weeks, the father finally gives in, and allows them to marry. After they are married, their new brides won't let them start the honeymoon until their build-it-yourself house is finished.

A follow up to "You Nazty Spy", the stooges have taken over the country of Moronica. Moe is Hailstone the Dictator, Curly is a Field Marshal and Larry is Minister of Propaganda. The stooges are planning with their allies to conquer the world, which mainly consists of fighting over a globe. The former king's daughter gets into their headquarters and plants a bomb which Curly detonates. All ends well as the king regains control of the country and the stooges wind up as trophies on the wall.