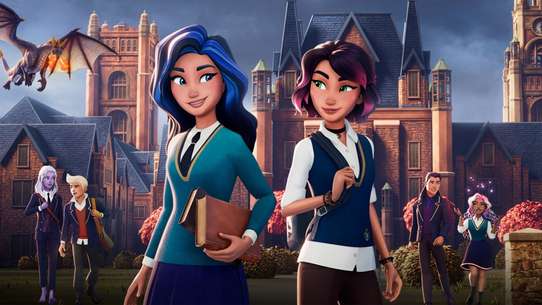 The BEST episodes of Supernatural Academy

The series chronicles the otherworldly adventure of sisters marked at birth. One twin sister was raised in the Supernatural world, confident and popular. The other was raised in the human world, an offbeat outsider. Now they’re about to be reunited at the Supernatural Academy, and neither one of them is thrilled about it. These adversarial twins will have to learn to get over their differences and trust each other in order to save themselves — and save the world!

The twins train to partake in Louis’s plan to destroy the Dragon King; Elda explores her powers.

#2 - Supernaturals of New York Part A

Jessa, Mischa and Jae escape to the human world but fear they could be on the run forever.

Powerful enforcers are on the hunt for Jessa and Mischa as the pack aids in their hopeful escape.

Jessa tries to rescue Mischa from the East-West Twins; another threat takes form in Stratford.

Jessa and Mischa risk their lives for the greater good as the rise of the Dragon King is upon them.

#6 - Supernaturals of New York Part B

Still on the run, the pack discovers the consequences of magic and the power of an ally at once.

The Dragon King curse threatens all supernaturals, but the twins find something equally haunting.

The twins find out the truth about the cloisters and the dragon-marked children within them.

Jessa and Mischa investigate what Headmaster Kristov is up to; the pack’s unity is questioned.

The twins return home to simmering unrest as a movement to release the Dragon King gains momentum.

Mischa falls victim to a prank; the pack teams up to make headway on Kristov’s mysterious behavior.

The girls risk being exposed at the Equinox Dance; Kristov reveals his true intentions.

Mischa is determined to access her suppressed wolf powers and employs her sister’s help to do it.

With their dragon marks exposed, Jessa and Mischa try to overcome adversity and catch Kristov.

Jessa and Mischa adjust to life together and learn the true reason why they were separated at birth.

Teenage twins Jessa and Mischa reunite and learn that they are both werewolves.