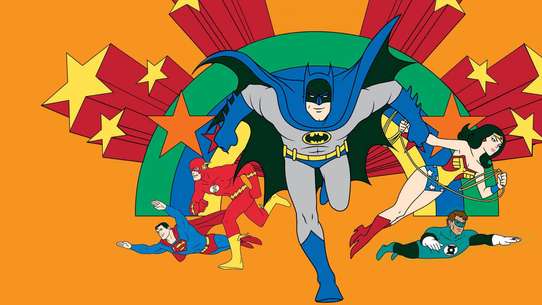 The BEST episodes of Super Friends

Super Friends first aired on ABC on September 8, 1973, featuring well-known DC characters Superman, Batman and Robin, Wonder Woman, and Aquaman as part of its Saturday morning cartoon lineup. It was produced by Hanna-Barbera and was based on the Justice League of America (JLA) and associated comic book characters published by DC Comics. The name of the program (and the JLA members featured with the Super Friends) have been variously represented (as Super Friends and Challenge of the Super Friends, for example) at different points in its broadcast history.

Bizarro takes revenge on the JLA by turning members into 'Super Bizarro slaves' and exposing Superman to Red Kryptonite. The Red Kryptonite's horrible effects cause Superman to grow extra arms and legs. Now Superman's only chance to stop Bizarro and return to normal is Blue Kryptonite.

At the start of the episode the Super Friends are involved in an intense outer space battle. Moments into the battle Wonder Woman gets a telepathic message from Aphrodite to help save the planet from a disturbance. Afterward all of the Super Friends show up and Aphrodite praises them on their great work and good will. An envious Hera gets into an argument with Aphrodite on Mount Olympus which triggers the wrath of Zeus. Hera criticizes Aphrodite for praising "mortals" such as the Super Friends and she suggests to Zeus that the Super Friends are not as powerful as Aphrodite claims. Zeus then creates a contest in which each of the Super Friends must do battle with mythological demons in an effort to prove they are worthy of Aphrodite's praise. Batman and Robin must battle a Sphinx and solve its riddle, Aquaman has to fight a demon that protects the golden fleece, Superman battles a minotaur, and Wonder Woman has to battle Medusa. The Wonder Twins get mixed up in all of this when they see Medusa in the shadows and mistake her for Wonder Woman...and once they look her in the eyes they turn to stone. Gleek manages to escape Medusa's clutches and ends up aiding Wonder Woman in removing Medusa's necklace. By episode's end the Super Friends prove to be worthy of Aphrodite's praise.

The Earth is shown to be in ruins and there is no life of any kind. Three aliens visit the Earth and investigate the ruins of the Hall of Justice, reviewing historical records of the Justice League of America's conflicts against the Legion of Doom as well as the Legion's individual origins. When they can no longer review anymore data due to a computer malfunction, they find the Hall of Doom to discover that the destruction of Earth was inadvertently caused by Lex Luthor and the Legion of Doom in a final attempt to destroy the Super Friends using a solar flare. When the force field was turned on around Earth, it reacted by destroying the Earth. The aliens reverse the damage and sabotage Luthor's plan to prevent the earth from being destroyed again by moving the Moon into the flare's path, leaving Luthor and the Super Friends both mystified.

A small-time thief named Benny finds an ancient lamp during a robbery. Batman and Apache Chief apprehend the crook... but observing from a distance is Mxyzptlk. He decides to get into the act by playing the part of a genie... who zaps the crook away... and from that point forward the two go on a crime spree. Batman gets the last laugh on Mxyzptlk, though.

#5 - Secret Origins of the Superfriends

Lex Luthor has discovered the origins of Superman, Wonder Woman and Green Lantern and proposes for the Legion of Doom to travel back in time and prevent them from existing. Cheetah cheats in a tournament and becomes Wonder Woman, Lex Luthor becomes Green Lantern and the Legion of Doom alter baby Kal-El's spaceship away from Earth. However after taking the other more obscure Super Friends prisoner, Batman finds a tape of the plan carried out and uses the Justice League computer to find gaps in it's memory, confirming that history was altered. They travel back in time and rectify Luthor's meddling and gain back their teammates.

#6 - The Case of the Shrinking Superfriends

Lex Luthor invents a shrinking ray and uses it on the Hall of Justice. The older members of the Justice League had earlier flown off to fight a mission in space... leaving behind the junior members like Robin, The Wonder Twins and Gleek, and Firestorm. Luthor succeeds in shrinking the Hall of Justice and it's up to the now miniature Superfriends to save the day before the senior members of the group return from space.

In a parallel universe, the Super Friends are super villains. When Mount Vesuvius erupts in both worlds, Superman and his evil counterpart are blown into opposite worlds. While Superman has to fight his evil comrades and find a way back to his own world, his evil counterpart battles the real heroes and begins his plan to conquer the Earth.

Zy-Kree, an escapee from the Phantom Zone (who is very similar to General Zod in both appearance and back story) seeks revenge on Superman by turning the Earth's sun red and thus depowering the man of steel. It is up to Green Lantern and Aquaman to help their friend defeat the evil Kryptonian who has the same powers as Superman.

Bizarro #1, the weird yet funny Superman doppelganger from Htrae (Bizarro World), uses his duplicator ray to create Bizarro versions of Wonder Woman, Firestorm and Cyborg. These "opposite clones" are then called upon to protect Bizarro World from its many enemies. Unfortunately, the prankish Mr. Mxyzptlk plans to harness the powers of the three Bizarro superheroes in order to wreak havoc upon the earth, in an endless series of nasty pranks and practical jokes specially designed to drive everyone as crazy as HE is! Until the Real Wonder Woman uses the duplicator ray on Mr. Mxyzptlk to create Mr. Kltpzyxm, causing the Bizarro Super Powers team to go back to Bizarro World and stop him, and making Mr. Mxyzptlk accidentally say his name backwards and go back to the 5th dimension.

At an intergalactic auction, Darkseid and his crew set their eyes on gold kryptonite. It's the only chunk of gold kryptonite, which can permanently strip away all of the powers that Superman enjoys on Earth. known to be in existence. Black Vulcan, Wonder Woman, and Firestorm infiltrate the auction under disguise as ice creatures. They plan on bidding high and taking the gold kryptonite before it can fall into enemy hands, but Darkseid soon realizes their plan.

Wonder Woman and El Dorado respond to a series of art gallery robberies in Metropolis. They confront John Palette, a painter whose invention can turn paintings of his design into real life monsters that can steal for him.

The mischievous imp Mxyzpltk returns to star the Super Friends in "Mxyzpltk's Flick."

A group of Exxorian monkeys arrive on Earth to invade the Planet. The monkeys want to destroy the Super Friends by putting Gleek under their control. The Wonder Twins must use their powers to help Gleek and the Super Friends.

While protecting a prehistoric planet from a meteor, Superman ends up hit by the meteor's nuclear core, crash lands on the medieval planet of Camelon, and loses his memory. A bunch of rebels led by Logan take him in as their black knight in a plan to overthrow King Arthur 7. It's up to the Super Friends to help Superman remember and defeat the rebels.

#17 - The Rise and Fall of the Superfriends

The Super Friends are visited by Mr. Mxyzptlk who comes complete with a script for a movie that he wants the Super Friends to star in. The imp uses his 5th dimensional mind control to cause the Super Friends to act out the script...but Superman is not affected by the mind control but he nonetheless goes along with everything in an elaborate plot to trick Mxyzptlk into saying his last name backwards. In one scene a zombie Lois Lane shows up in a wedding dress wearing a kryptonite wedding ring.

The Super Friends must use all of their superpowers in order to overcome the mental mischief of Medula and her power-hungry plans to eradicate all men so women led by her can rule the world.

When Dr. Frankenstein steals the powers of Superman, Batman, and Wonder Woman and transfers them into his latest creation, it's up to Robin to stop the Super-Monster.

Darkseid catches onto the trick and plots an elaborate scheme to expose Superman to the gold kryptonite that he won. El Dorado, Batman, and Superman travel to the Moon of Games to confront Kalibak about which star has Darkseid imprisoned Black Vulcan, Wonder Woman, and Firestorm. El Dorado hatches a plan with the help of Batman. Darkseid shows up unexpectedly, as El Dorado had feared, and Darkseid throws the gold kryptonite at Superman... but did it work?

The Legion of Doom deserts Sinestro, Black Manta and Cheetah after a failed mission and the three villains decide to kill the Legion of Doom for betrayal. Until the Super Friends find out this is just a ploy to get them distracted.

What starts off as a camping trip for the Wonder Twins turns into a nightmarish adventure in Middle Earth when the Super Friends must battle a black magic sorcerer named Mal Havok who has taken over the troll kingdom. Mal Havoc uses his magic to turn the Super Friends into trolls. With their powers reduced, Batman and Wonder Woman accompany the troll king on a mission to free Middle Earth of the evil sorcerer.

Captain Cold recruits the Fearians (inhibitants of Venus) to help the Legion of Doom take over the world and destroy the Super Friends. The Fearians say that the Legion has to make the environment suitable for Fearian life-forms first, so Captain Cold freezes the world and when Flash defrosts it, great quantities of steam making the temperature higher, Black Manta sets fire to an island and when Aquaman uses a great tidal wive to put out the flames, the water floods inlands, making more plants grow and finally, Sinestro sends comets to Earth and when Green Lantern moves the Earth out of its usual orbit place to save it, the temperature rises even higher. The Fearians can now enter Earth to make it "Venus II".

#25 - Two Gleeks Are Deadlier Than One

Wonder Woman and Green Lantern think the Legion of Doom will strike since the entire Justice League is going to meet in the Hall of Justice the next day. Jayna and Zan are put in charge of security during the night. Giganta sets a trap and captures Gleek with bananas and takes him to Gorillia Grodd miles away on the outskirts of Metropolis. Because so many Justice League members were going to meet in one place, they tried to take precautions but a mechanical duplicate of Gleek arrives at the Hall of Justice to use his killer laser eyes on the Justice League and help Grodd and Giganta take over the Hall of Justice. However the Super Friends then reveal they used androids, knowing such a meeting would probably cause an attack by villains.