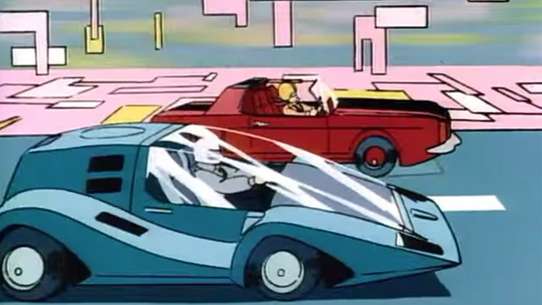 The BEST episodes of Pole Position

The show featured three young sibling crime fighters, two of whom were stunt drivers and part of a secret government operation under the guise of the "Pole Position Stunt Show" that was run by their uncle. The youths inherited the role after their parents died in an unfortunate car accident. The team is equipped with two high-tech talking vehicles named "Roadie" and "Wheels." The vehicles featured numerous hidden gadgets like water skis and hover jets. The vehicles' computers themselves are portable and can be removed from the dashboards and carried around using handles, (thus they are often referred to as "the modules"). They are characters that appeared as computer-drawn faces displayed on video screens.

A rogue Pole Position agent by the name of Greg Dumont, a love interest of Tess is hired by a criminal mastermind by the name of Vance to steal the control codes to Roadie and Wheels in an attempt to get his hands on the high-tech cars and use the A.I.s to destroy Pole Position.

#2 - The Chicken Who Knew Too Much

The team protects a chicken, given to them as a gift from an archaeologist. But when a bad guy shows up to abduct the fowl, the team must figure out the bird's link to finding a hidden treasure.

The team goes to the Florida Everglades looking for Pandora, a lost dog that is carrying an important vaccine. They must find the dog before enemy agents gets their hands on her.

Kuma uncovers a plot to steal an Indian totem hidden somewhere at Mount Rushmore. He tries to warn the others with a quarter, nickel, and a penny (31 cents) all of which have the same presidents as the monument; Washington, Jefferson, and Lincoln.

The team is assigned to protect museum paintings that are being mysteriously vandalized; the cut pieces secretly contain a diagram for an advanced computer chip

The team enters a race suspected to be used to smuggle a computer chip out of the country.

The team is assigned to deliver satellite equipment to a mountain research station but the equipment is stolen, and a snow storm thwarts the kids' attempts at getting it back.

The team is stranded in an unfriendly town and harassed by the local sheriff. The unwelcoming treatment leads the team to suspect criminal activity at the town's gold mine and that the sheriff may be involved, only to be beat to the punch when Tess is arrested with a gold nugget on her..

Dan and Tess are invited to their hometown to celebrate a queen's pageant where Tess is made carnival queen, but the queens amulet she wears is a fake made of candy as the real one goes missing. Clues lead to a jealous woman who makes the candy amulets and holds a grudge that she wasn't chosen as queen every year and finds out her son stole the actual amulet for her.

The team searches for an abducted engineer who designed Roadie and Wheels. The only clues to finding him lie in a talking teddy bear.

The team gets stuck in a weird town controlled by a strange illusionist.

The kids go to an island threatened by a tsunami to rescue Dr. Lungo (Kuma's creator). They find that Lungo's shady assistants are trying to kill him and steal his genetic research.

Uncle Zach is missing, and the kids find out they are suspects in his disappearance.