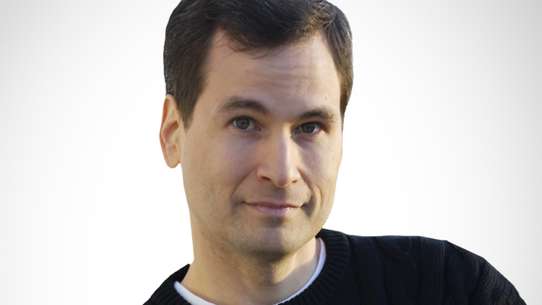 The BEST episodes of NOVA scienceNOW

NOVA scienceNOW is a news magazine version of the venerable PBS science program NOVA. Premiering on January 25, 2005, the series was originally hosted by Robert Krulwich, who described it as an experiment in coverage of "breaking science, science that's right out of the lab, science that sometimes bumps up against politics, art, culture". At the beginning of season two, Neil deGrasse Tyson replaced Krulwich as the show's host. Following season five, David Pogue began hosting.

A paleobiologist has discovered preserved blood vessels and red blood cells in a 68-million-year-old dinosaur bone.Epigenetics: It seems that diet and lifestyle actually change the expression of our genes.Kryptos: A sculpture called Kryptos in the courtyard of CIA headquarters, contains a code that has yet to be fully broken.Profile: Arlie Petters: A look at Duke University Professor of Mathematics and Physics, and his research in the field of gravitational lensing.

Sleep may play an important role in strengthening memories.CERN: The Large Hadron Collider (LHC) nears completion at the international particle physics lab in Geneva, Switzerland.Emergence: Scientists try to understand a phenomenon called emergence, which allows a flock of birds or a school of fish to maintain such impressive order.Profile: Julie Schablitsky: A profile of University of Oregon archaeologist Julie Schablitsky, whose research is helping to rewrite the history of the Old West.

This provocative episode of NOVA scienceNOW examines whether we can slow down the aging process, looks at the latest on human hibernation, and checks in with bioengineers and a computer scientist inventing ways to keep us "going forever." Neil deGrasse Tyson also takes a lighthearted look at whether the tricks that have kept a 1966 Volvo running for 2.7 million miles can also help the human body go the extra mile.

In this episode of NOVA scienceNOW, journey back in time to the birth of our solar system to examine whether the key to our planet's existence might have been the explosive shockwave of an ancient supernova. Meet a chemist who has yielded a new kind of "recipe" for natural processes to assemble and create the building blocks of life. And see how the head louse, a creepy critter that's been sucking our blood for millions of years, is offering clues about our evolution. Finally, meet neuroscientist André Fenton, who is looking into erasing painful memories with an injection.

This episode of NOVA scienceNOW delves into some pretty heady stuff, examining magic and the brain, artificial intelligence, magnetic mind control, and the work of neuroscientist and synesthesia researcher David Eagleman. Can we really believe our own eyes? Will machines one day think like us? Can magnetic wands effectively control brain functions and treat depression? Explore this and more.

The Apophis asteroid, the size of a football stadium, is headed towards Earth and should arrive in 2036.Island of Stability: The long road to creating element 114.Obesity: The biology of eating.Profile: Karl Iagnemma: A look at MIT roboticist and fiction writer Karl Iagnemma.

Featured segments include: the future of hydrogen fuel cell cars, the discovery of medical potential within a petunia, a fast moving glacier and what it says about global warming, and a profile of brothers and mathematicians Gregory and David Chudnovsky.

Would you care to match wits with a dog, an octopus, a dolphin, or a parrot? You may think twice after watching the segments in this NOVA scienceNOW episode. While we may not be ready to send pets to Harvard, the remarkable footage and findings presented here demonstrate that many animal species are much smarter than we assume and in ways we had never imagined.

Can humans survive a trip to Mars and back that could take two to three years? This episode of NOVA scienceNOW examines all of the perils of this journey, including deadly meteoroids, bone and muscle deterioration, and cosmic radiation. Host Neil deGrasse Tyson checks in with scientists who are developing new ways to keep astronauts alive on such a journey. Among the innovations covered are meteoroid-proof materials, new space foods and spacesuits, and novel modes of transport, such as plasma rockets. This episode also profiles young female scientist and daredevil Vandi Verma, part of the team that drives the Mars rovers on the martian surface.

A look at recent research on the aging process, and how we might slow it down.Space Elevator: The possible creation of a "space elevator" made from nanotubes, and a NASA contest designed to fuel innovation behind this idea.Maya: The use of a new NASA satellite technique to find lost Maya ruins.Profile: Bonnie Bassler: A look at Princeton molecular biologist Bonnie Bassler and her research on bacteria communication.

We humans have long wondered how animals see the world—and us. Does your dog really feel shame when it gives you that famous "guilty look?" What is behind the "swarm intelligence" of slime mold or a honeybee hive? How can pigeons possibly find their way home across hundreds of miles of unfamiliar terrain? In this episode of NOVA scienceNOW, David Pogue meets—and competes—with a menagerie of smart critters that challenge preconceived notions about what makes "us" different from "them," expanding our understanding of how animals really think.

Dark Matter - Turns out most of the universe is held together by a mysterious, invisible substance. Of Mice and Memory - Mice placed in enriched environments can recover lost memories, giving hope to those who study Alzheimer's. Profile: Hany Farid - This self-proclaimed "accidental scientist" is a digital detective inventing new ways to tell if photos have been faked. Wisdom of the Crowds - Ask enough people to estimate something, and their combined guesses will get you surprisingly close to the right answer.

Featured segments include: the discovered remains of three-foot-tall humans on the island of Flores, a look at how T. Rex got to be so big, a profile of nanotechnologist Naomi Halas, the issues surrounding stem cells, and the yearly freeze and thaw cycle of the common wood frog.

Follow a NASA satellite looking for water on the moon, see what ancient salt deposits reveal about life 250 million years ago, learn how bird brains are remarkably similar to our own, and meet a climatologist who digs for clues to climate change in the world's highest glaciers.

Using new data from cave stalagmites and the Mississippi riverbed to understand how and why earthquakes strike in the heartland; the crucial role sleep plays in strengthening memories and facilitating learning; a profile of marine geologist Sang-Mook Lee; paleontologist Jonathan Bloch, who thinks that tiny bones embedded in limestone may be the evolutionary evidence of the creatures that evolved into primates.

Topics include: Getting worked up over mirror neurons, new tools for predicting hurricanes, the sounds that sand dunes make, and a profile of MIT robot designer James McLurkin.

Featured segments include: a possible tenth planet in our solar system, the twin prime conjecture, a possible reappearance of the ivory-billed woodpecker, a look at the bird flu and whether it will move to people, the growing of meat in a laboratory culture, an update on stem cells, the link between hurricanes and global warming, and a profile of cancer researcher Tyler Curiel.

Explore the controversies behind genetic testing and genome sequencing, learn about algae fuel, follow an expedition to the Arctic Ocean seafloor, and meet a woman engineer designing prosthetic limbs controlled by human thought.

How do you get a genius brain? Is it all in your genes? Or is it hard work? Is it possible that everyone’s brain has untapped genius–just waiting for the right circumstances so it can be unleashed? From a man who can immediately name the day of the week of any date in history to a “memory athlete” who can remember strings of hundreds of random numbers, David Pogue meets people stretching the boundaries of what the human mind can do. Then, Pogue puts himself to the test: after high-resolution scanning, he finds out how the anatomy of his brain measures up against the greatest mind of the century: Albert Einstein.

Featured segments include: scientists making life in the lab, lightning that may be triggered by cosmic rays, a profile of neuroscientist Erich Jarvis, the advances of fish surgery, the too human appearance of Hollywood aliens, and an update on Hurricane Katrina.

What's the secret to stopping crime? David Pogue gives the third degree to scientists pushing the limits of technology, not only to solve horrific murders but also to try to prevent crimes before they even happen. Pogue learns the latest techniques, from unraveling the clues embedded in a decomposing corpse, to detecting lies by peering directly into a suspect's brain, to tracking the creation of a criminal mind. And we meet a genius crime-stopper who has made some terrifying discoveries, including how easy it is for a bad guy to highjack not just your laptop but your kids’ toys, medical devices, even your car.

In this episode of NOVA scienceNOW, come face to face with social robots that understand human feelings, carry on conversations, even make jokes. Then travel to Haiti, where geologists investigate the 2010 earthquake not long after it struck for clues to how to better forecast future quakes. Afterwards, join engineers at General Motors who are testing tiny, two-wheeled cars called EN-Vs, which one day might drive themselves through city streets. Learn about proposals for making our outdated electric grid "smart." And meet Nebraska native Jay Keasling, a pioneer in synthetic biology who shares his work on developing "designer" microbes that produce biofuels and medicines.

Scientists have struggled for centuries to pinpoint the qualities that separate human beings from the millions of other animal species that have evolved on this planet. David Pogue explores the traits we once thought were uniquely ours—language, tool-making, even laughter—to uncover their evolutionary roots. He'll trace some of the crucial steps that transformed cave men to accountants, and find out if any of his own DNA came from a Neanderthal ancestor.

Personal DNA Testing - Genetic testing to assess risk factors for a handful of serious illnesses is now commercially available. But is it a good idea? Art Authentication - See how clever computer algorithms can distinguish a master fake from a masterpiece. Capturing Carbon - An eighth-grader's science fair project prompts her scientist father to develop a new way to pull excess carbon dioxide out of the atmosphere. Profile: Pardis Sabeti - By night she's a rocker. By day, she's a Harvard geneticist tracking the evolution of the human genome.

This is Life with Lisa Ling