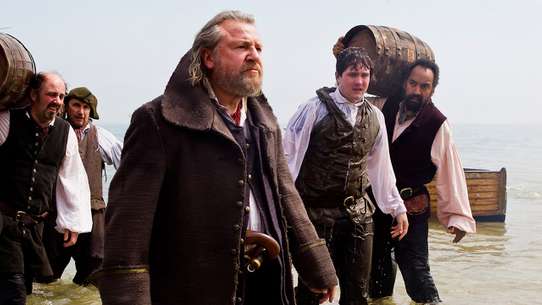 The BEST episodes of Moonfleet

Every episode of Moonfleet ever, ranked from best to worst by thousands of votes from fans of the show. The best episodes of Moonfleet!

Ray Winstone leads a gang of smugglers in our brand new family drama, Moonfleet. Written by Ashley Pharoah (Life on Mars, Ashes to Ashes), this two-part adaptation of the much-loved John Meade Falkner novel is set in the small Dorset village of Moonfleet. In the story, young John Trenchard (Aneurin Barnard - The Truth About Emanuel, The White Queen) is desperate to join the local band of smugglers led by Elzevir Block (Winstone - The Departed, Hugo, Snow White And The Huntsman). Together they embark on an adventure full of action, friendship, and humour, and hunt for a fabled lost diamond. Their journey takes them from 18th Century Dorset, to the jewellery quarter of The Hague, and on to a gripping, final sea voyage. Newcomer Sophie Cookson joins the cast as John's first love, Grace, who is also the daughter of Moonfleet's anti-smuggling magistrate, Mohune, played by Ben Chaplin (Mad Dogs, Dorian Gray). Omid Djalili (Gladiator) will appear as a diamond merchant, Aldobrand, and Martin Trenaman (The Inbetweeners) as the Turnkey. Lorcan Cranitch (Silent Witness, Cracker) and Anthony Ofoegbu (Spooks, The Bill) play Elzevirs fellow smugglers, Meech and Loder. The show is directed by Andy de Emmony (The Bletchley Circle) and produced by Dan McCulloch (Endeavour).

A young orphan and a smuggler find themselves being thrown together on a danger-filled quest.

Some sacrifices need to be made and lessons have to be learned as Elzevir and John leave on an exciting voyage to find Blackbeard's fabled diamond.