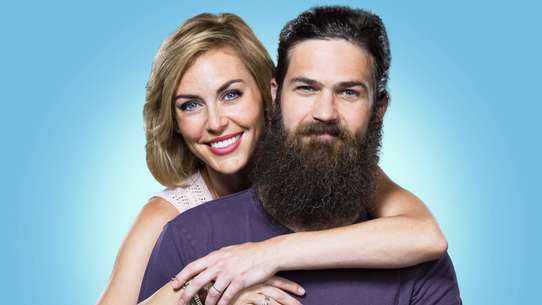 The BEST episodes of Jep & Jessica: Growing the Dynasty

The new original series "Jep & Jessica: Growing The Dynasty" will chronicle the lives of Jep and Jessica Robertson as they finalize the adoption process and introduce new baby Jules to their other children -- Lily, Merritt, Priscilla, and River as well as the rest of the extended Duck Dynasty family. The Robertson's parenting skills are put to the test this season as they tackle the same challenges all new parents face including baby blessing ceremonies, showers, diaper rashes, and circumcisions. As always, viewers will get to come along for the ride as the family faces new milestones together with their unique, down-home sense of humor.

Jep and Jessica homeschool their children but it’s Jep who might get sent to the principal’s office when a field trip goes awry.

A routine trip to the mall turns awkward for Jep when Lily asks for a new bra. Meanwhile, Jess takes River to Austin to have a mystery ailment diagnosed.

Jep is tasked with getting all of the kids to their dentist appointments while Jess is in Little Rock, pitching her jewelry line at Dillard's. When Jules' babysitter plans fall through, Jess is forced to bring him along to her business meeting. Meanwhile, even though Jessica warned against it, Jep takes the kids out for some fun before their dentist appointments, sure that he can fit everything into the day. However, when Jep encounters some unexpected delays, things take a turn for the worse.

Jep reveals to Jessica and the kids that he's getting into the food truck business. When Jessica protests, Jep agrees to hire someone to help her around the house. Meanwhile, Jessica has a surprise of her own for Jep.

Jep and Jess are going on their annual, adults-only camping trip with their friends while Uncle Si babysits the kids. Jess and her friends decide to rent a fancy camper so they can “glamp” in style, but Jep and his friends want to rough it in a tent. When cold weather swoops in, Jep and his friends begin to question their decision to “rough it.” Back at home, the kids are unfazed as they watch a scary movie. Si laments how today's kids are desensitized and takes the kids to a haunted barn, set to prove he can scare them the old fashioned way.

Jess battles with becoming a “soccer mom” while preparing Priscilla for soccer tryouts. Meanwhile, Jep tries to take the rest of the kids bird watching for some quality time outdoors, but gets side tracked when he learns there are cash prizes for finding rare birds.

Worried that River spends too much time playing video games, Jep teams up with Martin to come up with an activity to get River outside. Jess and Kathy squabble over which one of them is the rightful owner of a raffle prize, with Gus stuck in the middle.

When Lily goes through her first breakup, Jessica wants to console her with a girls day out to help her get her mind off her troubles. Meanwhile, when Jep finds River the subject of his sisters' dress-up game, he decides it's time to take him on his first duck hunt along with Godwin and Martin. Together, the family helps Lily get through her heartbreak and helps River embrace a new love with duck hunting.

Jep and Jessica attempt to flip a house for the first time but run into trouble when Jep tries doing the work himself.

Jessica's mother, Kathy, moves into the house and Jep insists on hazing her. Meanwhile, Jep and Jessica prepare to finalize baby Gus's adoption.

After Jep hurts his back working on the food truck, Merritt worries he won't be able to accompany her to father-daughter skate day. Kathy helps Priscilla prepare for the school play by becoming her acting coach.

The family picks up baby Jules from the hospital and has to make an emergency stop at the drug store on the way home for baby items. Back home, all of our favorite Duck Dynasty cast members stop by the house to meet the new baby. The episode culminates with Jep and Jess' family members and friends arriving at their house for a baby blessing ceremony of Jules performed by Alan and Phil.

Jep and Jessica can't agree on what to serve on their food truck, so they take their recipes to the farmer's market to see what the locals prefer. Meanwhile, Si teaches River how to make his own toys from random items in the woods.

A grease fire at home kicks up Jep's emergency preparedness with the kids. Jess and Kathy explore the honey-making process in hopes of adding another potential revenue stream to the food truck.

Jep and Jess are considering getting a new treehouse for the kids. However, the plans are put on hold when the kids are caught making a mess in the kitchen using Jep's new blender that they were warned not to play with. The fate of the treehouse now rests on the completion of the kids sentencing: a day of work at Uncle Si's house.

When Jep and Jess go into their yard to get some eggs, they discover their chickens have been killed by a hawk. Jess takes Miss Kay with her to buy some replacement chickens while Jep takes the kids to work to help them get their minds off the dead chickens that were like pets to them. While Jess and Miss Kay are shopping for chickens, Jess decides to surprise the kids and Jep with a new pet that will help them get over the death of the chickens, unbeknownst to Jep. Meanwhile, while Jep is entertaining the kids at the warehouse, they accidentally set off the security alarm, stranding themselves outside with a baby, a dirty diaper, and no diaper bag.

After Lily and Merritt plead with their parents to let them babysit Gus on their own, Jep reluctantly agrees on one condition--that they all take baby CPR. Meanwhile, Kathy and Miss Kay compete for their grandkids' affection and attention in a Battle of the Grandmas.

After Miss Kay gets the kids sugar-crazed, Jess decides the family needs to cut sugar out of their diet for a week. Meanwhile, Jep gets himself into a jam while trying to snoop on Lily's diary.

Jep worries he's put on weight since Jules arrived so he sets out to get back into his “ninja” workout regimen with his friend Dan. This creates an issue with Jep's friend Nicky who had plans with Jep to play videogames. Jep and Nicky get into a debate about the merits of working out vs. being “country strong” and decide to settle their dispute with a series of workout and strength competitions. Meanwhile, Jess takes her friend Emily to the adoption office to help her sign up for foster care. They learn about an upcoming walkathon benefitting the foster care program, so Jess and her friends sign up, and the whole family ends up participating.

Jules comes down with a severe diaper rash, which causes Jessica to forget that she and Jep's 14th wedding anniversary is the next day. It's been a while since Jep and Jess had some alone time, so Jep plans a big night of surprises for Jess which includes a party bus, dinner out, and an overnight trip to Shreveport. However, Jess is nervous about leaving baby Jules home with a babysitter for the first time, which causes her to change her mind about the whole thing. Jess promises Jep some “alone time” at home, which causes them to cancel their Shreveport plans and go home to see the kids instead.

It's time for Jules' circumcision appointment, and Jep and Jess must have a conversation with their kids about what that entails. The family goes to the hospital for the procedure, which Jep and Jess use as an opportunity to film video diary footage, however, Jep quickly gets grossed out and leaves. The next day, Jess's friends throw her a baby shower while Jep decides to have a “circumbration” party with his male friends, celebrating Jules' circumcision.

It's Lily's birthday, and she informs her parents hat she'd like to have an 80's themed party to celebrate. Jep and Jess are excited to help her plan it, although they're both a little sad about how fast their oldest daughter is growing up. Jep and his friends decide to dress up as 80's breakdancers for the party and take a hip-hop dance class so they can learn some authentic moves. Meanwhile, Jess and her friends teach the girls how to make acid washed jeans and apply the perfect 1980's hair and makeup for the party.

Jep and Jess discover they are eligible to adopt a newborn baby boy, but they have to wait five days for the birth mother's decision to become final. Over the course of the five days we follow them as they prepare for the baby's arrival. They get some advice from Willie and Korie, Jess visits Kay for some of Jep's old mementos, and Jep and Phil paint a nursery for the baby, with the help of River. On the fifth day, they get the call that the baby is officially theirs and they leave to go pick him up. We end this episode on a cliff hanger.

Jep and Jessica host a “soft launch” of their food truck and run into some trouble finding potential employees. Lily and Merritt make their first business mistake after being hired to house-sit for Uncle Alan.

After a lackluster grand opening for their food truck, Jep and Jess agree to cater a friend's party to stir up business. Meanwhile, Priscilla develops a business acumen of her own while selling chocolate for her soccer team's fundraiser.