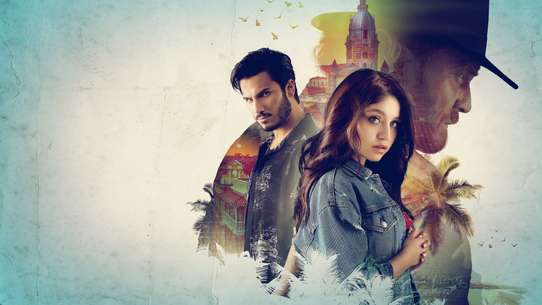 The BEST episodes of It Was Always Me

When Lupe is 22 years old, her life suddenly changes after she learns that her father, a famous Colombian singer-songwriter, has died. Upon arriving in Colombia, Lupe meets Noah, a mysterious character who turns out to be her father's assistant. Instead of returning to Mexico, Lupe decides to stay as she suspects that the musician's death was not an accident. Together with Noah, she will embark on a musical adventure full of danger, mystery and romance, in the Caribbean region of Colombia.

Everyone prepares for the grand finale of Colombia's most famous game show. Meanwhile, Lupe and Noah are caught in a deadly trap after discovering the explosive truth about el Faraón and what really happened on the fateful night of the explosion.

Lupe leaves her quiet life in Mexico after receiving shocking news about her father and travels to Colombia. There she meets Noah, her father's assistant, and together they embark on an adventure full of mystery and music.

#3 - The Zoetrope is Spinning

Lupe and Noah go on a desperate search, as the chips are falling and the mystery of el Faraón is revealed. The second semi-final has arrived, but Sammy and Kevin risk not being in time for their performance as they embark on an adventure.

Lupe investigates the threat, while Noah loses an object that could jeopardise his relationship with her. The contest semi-finals are approaching, but Pipe loses his voice and his performance is in jeopardy. Sammy and Kevin get closer.

Lupe and Noah are becoming more and more connected as they prepare for the semi-final. Believing to have discovered the truth about what happened el Faraón, Lupe receives a big surprise that puts everything in doubt.

After a long journey, Lupe is confronted with a very painful and unexpected truth and moves away from Noah. She must make a decision that may endanger the people around her. Meanwhile, Sammy and Kevin chase the trail of Faraón's guitar.

Everything gets complicated in the second round of the contest and Lupe and Noah's passage to the semi-final is in danger. To make matters worse, what began as an innocent fling in a bar will bring them face to face with a big threat. Meanwhile, Kevin receives a suspicious visit from his sister.

With a new opportunity on the horizon, Lupe and Noah find the perfect song for their performance, but this arouses Pipe's fury. Determined, Angie tries to woo Sammy, but a request from Lupe ruins her plans and Kevin must come to the rescue.

Lupe and Noah arrive at the contest for the first round. She has continuous flashbacks of her father and feels that everyone is a possible suspect, but ends up asking Noah to join her and faces one of her biggest fears as soon as she gets on stage.

In a jam session, tensions between contestants surface. Following a clue, Lupe believes she discovers who is behind what happened to her father. Meanwhile, Noah must deal with an old flame who reappears to destabilize him.