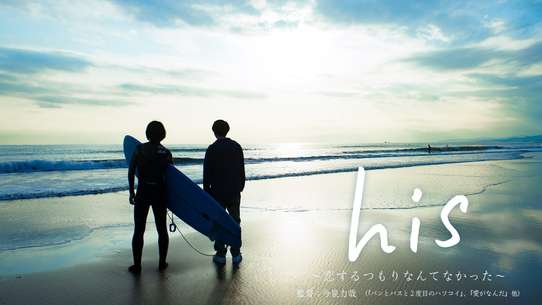 Nagisa is 17 years old and attends 2nd grade in high school. Shun is the same age as Nagisa and visits Fujisawa for spring break. They meet and develop a relationship more than friendship.

The day when Jin returns to Nagoya is approaching. Chika and Ako noticed Nagisa's feelings for Jin. Chika persuades her Nagisa to quickly convey her feelings. Nagisa is scared to move in front of her, remembering that she had a hard time with her in the past, confessing that she loved homosexuality. Meanwhile, Jin notices her feelings for Nagisa, but erases all the photos of Nagisa that fit in her digital camera, and she tries to return to Nagoya. What is the end of waiting for their love?

Jin who was invited by Nagisa to remain in Enoshima. Jin decides to experience surfing for the first time. Two people who finish surfing and change clothes. Nagisa feels a certain feeling when she sees Jin's back when she takes off her wetsuit. Nagisa, who has noticed her feelings, takes Jin to the place of farewell talk with her older Matsuko for some reason. What does this mean? Nagisa has noticed the feeling of thinking about Jin. The fateful love of the two begins to move.

Nagisa has noticed her love for Jin. Meanwhile, Chika's love begins to move. In addition, the love of Ako, a junior high school student in Chika, begins to move. Two men and two women. What does Jin think that a man likes a man ... I'm curious, Nagisa. Is the feeling of being homosexual true? Anxiety and confusion. Such Nagisa takes a certain action against the opposite sex. Where is the complicated love pattern?

Nagisa began dating Chika as if to seal her feelings. On the other hand, Ako, who is in love with Jin, chooses not to confess her. Such Ako notices her feelings that she has begun to sprout quickly ... The day when Jin returns to Nagoya is approaching. Passing each other, love. As expected, the ending that waits for the four youths! ??

One day in March, Jin Ikawa visits his father, who currently works alone from Nagoya, during his spring break. However, the father of a professional photographer goes on a business trip due to a sudden job. Jin takes a walk on the beach with time to spare. Then, I ran into a fighting surfer and his girlfriend, and I was forced to drop a surfboard from my boyfriend who was chasing her. In trouble, Jin, who was looking at the flying kites, got off and fell into the sea. It was Chika, the only daughter of the Kumagiri family, who appeared there after getting soaked and getting up from the sea. When she fell, she dropped the key to her father's apartment into the sea and had trouble knowing where to go. What appeared there ... Nagisa. Is this encounter a coincidence? It is inevitable.The awkward and frustrating youth between Nagisa, Jin and the people around them begins ...