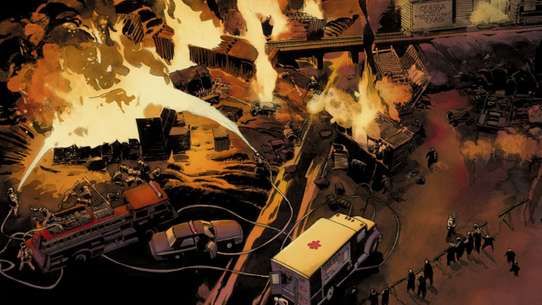 The BEST episodes of Heroes Unmasked

Heroes Unmasked is a behind-the-scenes documentary television series of the American television series Heroes, made by the BBC and narrated by Anthony Head in series 1-2, and in series 3 by former Heroes actor Santiago Cabrera. The show features interviews with cast and crew members as well as special effects artists discussing the process behind the creation of each episode as well as revealing plot backgrounds and future stories.

As Volume Three signs off in dramatic style, Heroes Unmasked ends with an equally thrilling climax. With exclusive behind-the-scenes action from the final moments, Heroes on the Run shows the heroes in their greatest danger yet. From exploding sets to gruelling fights, this truly no-holds-barred footage is sure to end with bruises and bloodshed. Also includes a sneak preview of the opening episode of Volume Four, which is set to kick off in style in the New Year.

With this season of Heroes adding new villains to the show, this episode goes into the creation and design of the Level 5 containment facility that has been built to house them as they are captured. Writers and producers are also interviewed about how they manage to come up with a shocking cliffhanger at the end of each episode. Included is backstage footage of Jack Coleman (HRG), Kristen Bell(Elle), and Santiago Cabrera (Isaac Mendez).

This episode explores how the technical crew is pushing the limits of current technology to pack effects worthy of a feature film into a weekly TV show. In particular, it goes behind the scenes of how the bank raid scene was filmed.

This episode explores the quasi-religious themes that are developing in Heroes, as the audience finally starts to find out where the various heroes and villains are getting their amazing powers from. Interviewed are Malcolm McDowell (Linderman), Cristine Rose (Angela Petrelli), Masi Oka (Hiro Nakamura) and executive producers Tim Kring and Mark Cossey.

As this week's episode of Heroes resurrects Arthur Petrelli, long thought to be dead, we look at the general idea of characters coming back from the dead, how they are introduced in the show, and how they change the relationships of the existing characters. Interviewed are Cristine Rose (Angela Petrelli), Adrian Pasdar (Nathan Petrelli), Milo Ventimiglia (Peter Petrelli) and Jack Coleman (HRG).

Now that we know the fate of our Heroes, this is the chance to look back at the highs and lows of their extraordinary journey.

The soundtrack to Heroes has been as distinctive and diverse as the Heroes themselves, and this week Heroes Unmasked joins composers Wendy Melvoin and Lisa Coleman at their studios in Los Angeles to hear how their musical magic is created. Having once been part of Prince's Revolution, Wendy and Lisa have become highly regarded composers and performers in their own right, and from day one on Heroes they have engineered a sound that is that is both epic and ethereal. In an exclusive interview and behind the scenes access to the process behind their compositions, Wendy and Lisa reveal their inspirations behind the music of the series, and their excitement at being so key to the Heroes team.

Unmasked goes behind the scenes of Hiro's journey to feudal Japan as he meets his childhood hero Takezo Kensei. The audience learns how feudal Japan came into being, and meets some of the new faces who are about to start their heroic journeys.

This episode goes back into the dark history of the heroes, and also looks at the current trouble the Petrellis are in.

We take a look at the Bennet family and how they are adjusting to their new life underground. As well as look into Claire's regenerative powers some more.

With new heroes come new powers - but none so dark as the black tears of Maya. Emitting a black poison that kills all around her, Maya's power is a burden, as unwelcome to her as to those around her. With her twin brother Alejandro as her antidote, the siblings are on the run, leaving a wake of death and destruction in their path.

Matt Parkman is a cop who is down on his luck. He's lost his wife, he's made Molly fall into a coma, and now he knows his own dad has the power to manipulate minds. Matt really is having a nightmare, in more ways than one. This episode features candid interviews with Greg Grunberg, Adrian Pasdar and the behind-the-scenes teams, as they reveal the brain power behind one of the most complex sequences to date, and the haunting yet stunning nightmare scenes that provide the setting for Nathan and Matt's battle royale.

From feudal Japan to future New York, it's up to the production team to create the look and style of the show and bring these worlds to life. So with the arrival of the Dawson family on our screens, how did they find the New Orleans locations in the middle of LA? With insights into Heroes' shooting style and graphic look, Heroes Unmasked finds out what goes into turning the writer's words on the script, to the stunning worlds on screen, whether filming in their Hollywood studio, out on location, or using the magic of CGI.

In season 1, our heroes had to save the cheerleader to save the world. This time, the stakes are raised and it's now a deadly virus that's set to wipe out the globe. In an episode where you're not quite sure who to believe, Stephen Tobolowsky (Bob Bishop) talks us though the global threat that the virus plays and the Company's attempts to stop it. The task of changing history falls on the shoulders of Peter Petrelli, who gives his side of the story, as he befriends a new hero.

The paintings have come to pass, and H.R.G's worst fears have come true. His friends have betrayed him, his family is mourning him, and now the Company's trapped him. Life for this ex-paper salesman really is in shreds. Through Heroes Eyes follows the journey of H.R.G to date that led up to his dramatic demise amidst the setting Californian sun, and hears from all the principal cast and production team as to how they brought a little of the Wild West into Heroes.

Heroes Unmasked takes a further look into the trials and tribulations of troubled teen, Claire. Having come face to face with Sylar in episode one, she also has an absent dad and two mums to deal with. With Claire and her family in greater danger than ever before at the creepy hands of puppet master Eric Doyle, Unmasked pulls the strings of all the leading cast to see how they created scenes with such tension and fear. And through speaking to the show's producers and writers, Unmasked reveals how those sinister scenes with Sylar borrow from the greatest traditions of teenage horror movies to show how life for Claire Bennet will never be the same again.

Heroes Unmasked comes straight from the director's chair this week, as the men and women at the helm of Heroes reveal what it takes to call the shots. From production meetings to technical recces, shot lists to storyboards, the journey from script to screen is followed with these eminent directors as they share their fears and thrills at leading such a massive production. Joining these directors on set with exclusive behind the scenes footage, it is clear that Heroes has recruited some of the best directing talent that Hollywood has to offer, as they reveal some of the tricks of the trade that makes Heroes such a visual treat.

From striking visual effects, to shocking prosthetics and demanding fights, all the outstanding physical skills behind Heroes are on display. Find out how Suresh slithers out of his own cocoon in front of your very eyes, share the stage with Hayden Panettiere and Jack Coleman as they rehearse and perform their own stunts, and watch out for The Elephant Man which is surely the most gory piece of casting yet on Heroes.

Whether creating the future or the revisiting the past, building a set or adapting a location, designing Heroes is both vast and varied. With Haiti taking centre stage in Heroes this week, Heroes Unmasked steps back in time to look at how Production Designer Ruth Ammon and her team planned out their design from the very beginning. The cameras then jump forward to see how these designs were translated onto set, bringing the flavour of Haiti to the locations of Los Angeles.