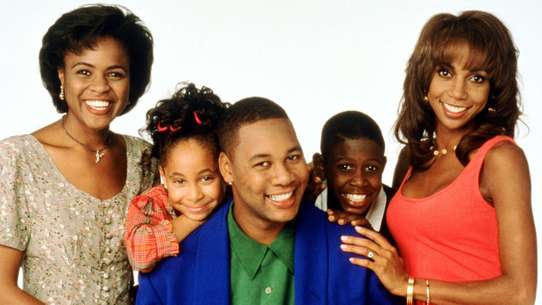 The BEST episodes of Hangin' with Mr. Cooper

Life couldn't be better for Mark Cooper (Mark Curry). He's charming, funny, playful and athletic--a really great guy ... And he'll be the first to tell you so! Just out of school and on his own for the first time, Mark shares a house with two beautiful women. The former college basketball superstar and ultimate prankster also happens to be the coolest substitute teacher around in Hangin' With Mr. Cooper.

Mark decides to invest in the vending machine business.

Mark finally gets a job interview with the head coach at San Francisco State, but he hurts his back before the interview.

To help the school earn money for textbooks, Mark works at a carnival pretending to be a fortuneteller.

Mark mother comes to visit him because she wants to start working and get out of the house but Mark dosen't want her too so he calls his father so he can try and get her back. Mark finds out that his mother is a great teacher after P.J made her subsitute his English class after he called in sick. Mark doesn't like it so he runs over to the school and finds Earvin and Andre and the rest of the class looking at dirty pictures. He takes them. Then his mother comes in he tries to hide but she sees him. When she starts teaching he realizes that she's a good teacher. At dinner Mark father comes and talks to his mother and they get back togther. Nicole writes an ad in the newspaper so she can get her mother a date for Mother's Day. Tyler comes over and gives Geneva a piece of string for Mother's Day because she been so nice to him. At the end of the show Nicole's gift (a man) comes and Geneva grabs him by his tie and rushes out the door. At the end of the episode Mark gets his Mom to cook for

Tyler makes a date with a girl for his first school dance, but Mark gives him bad advice on how to treat women.

Vanessa's job working as an emergency medical technician is eliminated due to budget cuts, so she starts her own business selling African beauty supplies. Meanwhile, Mark takes an additional job at a security company.

After Vanessa accepts Mark's marriage proposal, Mark looks for a deal on a ring he can afford. But there's a misunderstanding about the priceâ€”after he gives it to Vanessa.

Mark and Vanessa are determined to win the lottery and enlist Geneva's help in obtaining her aunt's guaranteed winning formula.

Instead of keeping his promise to Nicole to bring her to the circus, Mark lies to her so he can go out with his girlfriend Denise.

Geneva invites P.J. to stay at their house...but Mark didn't anticipate P.J. moving in along with her new little dog, aptly named Monster.

Vanessa is upset to learn that Mark wants to date her friend from the office. Everytime he goes on a date with one of her friends, she loses the friend.

In the beginning of the show, Mark shows the audience how in the last episode he was dunking during practice. He also showed how he was able to get the position on the Golden State Warriors team. The story begins from the last episode when he recieved the call from the team. Vanessa finds out that Mark quits his job from the school. Mark is signed to a 10-day contract where he has to prove to be on the team. He will play against the Phoenix Suns two times. Robin shows all the respect and believes that Mark can make the team. Robin also doubts that he will make the team and pleads with the high school coach to keep Mark's old job, if in case he does not make the team. Robin not only was able to keep Mark job open, she herself was qualified to teach the self-defence class. Robin did not want to tell Mark that she got the position. Robin also had to hide from Mark later in the episode. Also, Vanessa gets injured after Robin made some ""defence"" practice moves on her. Mark goes back to the

When Mark argues with the high school's girls' basketball coach, they decide to settle their differences with a one-on-one basketball game.

Mark meets Vanessa's extremely weathly parents for the first time, and hopes that they will pay for the wedding.

Despite wanting to marry Mark, Vanessa innocently has lunch with her former boyfriend. When Mark finds out, he frantically proposes marriage to her. But Vanessa rejects him, thinking he only did it out of jealousy.

While waiting to use the ATM, Mark witnesses a botched robbery attempt. A woman stops the thief but leaves the scene quickly. Everyone believes that Mark actually prevented the robbery and he doesn't deny it.

Mark's friend, Steve, convinces Mark that his relationship with his girlfriend Denise is boring. Concluding that Denise is to blame, Mark makes plans to stop dating her, but Denise stops dating him first.

Mark finally gets his dream job as the school's head basketball coach after Coach Corley leaves the position to coach college basketball.

Mark goes to a men's clothing store to buy a new tie for a weekend banquet and ends up getting conned by a beautiful but cunning saleswoman.

Mark finds out that his former basketball rival will be back in town to play at his high school's upcoming alumni basketball game. Fearing a repeat of an old high school humiliation with Reggie, who is now a NBA star, Mark fakes an injury.

Geneva has bought a desk for Nicole, which Mark is supposed to put together. But Mark's old friend from college, Steve, comes by to visit him. He's a sports columnist fot the Tribune. They go to Dirty Burgers to eat and talk about old memories. They both start to hit on the waitress. They are to go to the Warriors game that night, but when the waitress, Charlene, calls, they start to fight about old girlsfriends and Steve decides to going to the game with Charlene instead of Mark. But Mark phones and cancels Steve's tickets. Geneva tells Mark to call Steve and try to work things out. After some trouble and misunderstandings between Mark and Vanessa, Steve comes over to get his cellular phone, which he had forgot at Mark's. They appologize to each other. In this episode, Vanessa tried to get a job in a number of different ways. At last, she manages to get one, answering the phones, at a doctor's office. The desk was put together. Geneva lost her bet to Nicole that Mark wouldn't manage t

During the summer, P.J. (the principal) has been calling Mark's house and leaving messages. Geneva thinks he should call him back, but Mark refuses - he doesn't want to call his boss during the summer. When he comes to school, he tries to avoid P.J., but he fails. P.J. tells him that she had been calling him to offer him the job as head coach. Mark gets very happy and excited, until P.J. tells him that since he didn't return her phone calls, she had to offer the job to someone else. If he suck up to the new head coach, maybe he can become assistant coach. After Mark's history class, coach Corley comes into the classroom and asks him for advice and offers him the job as assistant coach, but Mark declines. Later coach Corley comes by the house and he and Mark decides that Mark is just going to come by the gym on Monday.

In this episode, Tyler sneaks into Vanessa's room while she gets dressed. Mark gives advice to keep his eyes open when it happens again. Robin goes on a blind date. Vanessa dates a doctor. Mark does not have a date but looks at the television and sees themselves on a show called ""Love Match"". The show will follow Mark, Robin, and Vanessa on their Valentine's day. The game show host interviews the cast and Vanessa's date comes in and Mark makes fun of both of them. But Mark still needs a date and here comes Robin's date. Robin starts liking her date until she finds out that he is addicted to his car. On Vanessa's date, her date tries to get her to tell the truth about everyhting and she insults the restaurant. Also, her date's ex-girlfrined is trying to kill him. Robin's date is not going so well when his car does not start. At the house, Tyler and Mark have a fun time playing war games. When Mark answers the door, a woman appears and asks to use his phone. Mark gets Tyler out and M

Mark is turning 30. Vanessa and Geneva decides to arrange an over-the-hill party. Tyler discovers a strange lump on Mark. Mark goes to the doctor to have it tested. A misunderstanding leads to Mark thinking that he's going to die because of the lump. He goes sky-diving and gives away his stuff. He even gives most of his money to Thaddeus to name a park after him.