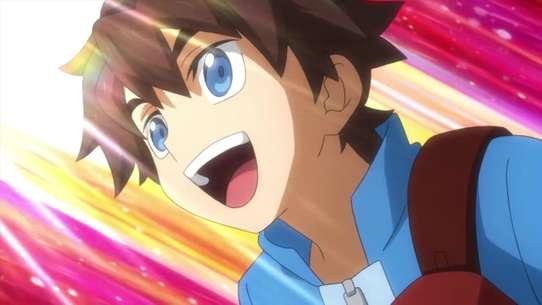 In the near future, where the Gundam franchise is at its peak and the popularity of Gunpla is soaring to new heights, a new Virtual Reality Massive Multiplayer Online (VRMMO) Game called "Gunpla Battle Nexus Online" (GBN) is made. In Gunpla Battle Nexus Online, players can upload themselves and their Gunpla online through the virtual space and battle with players from across the world. In the game itself, the player assumes the role of a Gunpla Diver, and each year a special tournament called "Gunpla Force Battle Tournament" is held to prove who is the best Gunpla Diver. The story revolves around Riku Mikami, a 14-year old junior high school student and an admirer of famous Gunpla Diver Kyoya Kujo. He and his friends Yukio and Momoka love Gunpla and play GBN together. However, his own life changes as he meets a mysterious Gunpla Diver named Sara as strange events take place in the GBN. Now guided by his new allies, he forms their first Gunpla Diver group, embarking on epic adventures with his friends and to see who is the best fighter in the GBN world

After witnessing the champion Kyoya Kujo in Gunpla Battle, Riku Mikami and his friend Yukio Hidaka have resolved to dive into the GBN world themselves. For the first time, they enter this virtual cyberspace dimension as "Divers," discovering spectacles greater than they ever imagined and an unending series of surprises. However, another Diver is watching the pair from hiding.

The battle against the Mass-Divers is over, and thanks to the Coalition of Volunteers, the Break Decals have been eradicated from GBN. At a victory celebration in Avalon's Force Nest, the Divers praise each other's efforts. However, Riku and the Build Divers members are nowhere to be seen.

The Raid Boss has gone berserk due to the effects of the bugs, and mutations are appearing throughout GBN. The mutation clinging to the lobby tower of the Far East base is rapidly eating its way into the main system, threatening the GBN world with imminent collapse. First Riku and his teammates, then all the Divers, concentrate their strength and begin the Raid Battle.

The battle against the new Coalition of Volunteers reaches its climax as Riku and Kyoya Kujo finally face off. Riku hesitates, recalling the promise he once made to the champion, who is now his opponent. But Kyoya addresses him coldly as just another Diver.

Build Divers has proposed a Force Battle to get Sarah back. The Coalition of Volunteers, led by Kyoya Kujo, accepts the challenge in order to protect the GBN world. Each harboring their own feelings, the players open fire as a decisive battle begins.

The members of Build Divers are shocked to see Sarah standing beside Kyoya Kujo in a GBN special broadcast to all Divers. With his harsh manner, Kyoya seems like a different person from his previous self. In order to find out the true intentions of Sarah, who has left her teammates, Riku tries to make contact with Kyoya.

The GBN administration has officially announced that Sarah is an electronic lifeform, or "EL-Diver," whose existence is the cause of the bug outbreaks. As the administration begins its pursuit, Riku and the other Build Divers are also searching for Sarah, who has run away from them.

Inspired by the Nadeshiko-athlon, Nami has become the newest member of Build Divers. Roping in her big brother, Nami has already begun planning for her Gunpla Battle debut, but now she asks a favor of Riku and the others in order to make GBN even more enjoyable.

The Nadeshiko-athlon, a women-only pre-event to the Raid Battle, is about to begin. The female Divers are excited to hear that the winner will be chosen as an "image girl" for the recruitment of girl Divers, and the news carries even beyond GBN to reach Nanami's ears.

Riku has continued to grow as a Diver, to the point of reaching the top ten in GBN's Time Attack mission. As his Build Divers teammates and senior Divers congratulate him, Tigerwolf of Force Toraburyu, who once trained Riku, has come to recognize him as a rival rather than a mere student.

The Build Divers members are wholeheartedly enjoying their new Force Nest, an environment so lavish that it rivals those of the most famous forces. Yukki voices his admiration for Riku, who has greatly improved as a Diver. But meanwhile, a new wish has formed within Yukki's heart.

Having cleared the difficult Lotus Challenge, the Build Divers have earned the GBN world's greatest prize. As Riku and the other members consider how they can use it to achieve their individual dreams, Momo offers a proposal on a truly outrageous scale.

The Lotus Challenge is an almost unbeatable created mission in which you must conquer the impregnable Lotus Fortress within a certain period of time. Even the champion's Force Avalon has failed to overcome this obstacle, but now that they have the Gundam 00 Sky, Riku and the other Build Divers are determined to attempt the challenge.

After confronting Shiba in a real model battle in Gunpla Duel, Riku's 00 Diver Ace has suffered serious damage. Unlike with GBN, Riku's precious partner has been damaged in reality. Koichi is worried about Riku, and tries to cheer him up, but is surprised by Riku's reaction.

Riku and Sarah finally confront Tsukasa Shiba, the mastermind behind the Mass-Divers. Undaunted by the intense hatred of GBN that courses through Shiba's whole body, they try to engage him in dialogue. Meanwhile, a huge mobile armor appears in the space around the resource satellite where the main battle is taking place, strengthened even further by the Break Decals' power.

As the fierce battle between the champion's Coalition of Volunteers and the Mass-Divers reaches its peak, Riku unexpectedly finds his way blocked by Ayame, who reveals the true reason why she joined Build Divers. This secret motive is deeply connected to her past.

The threat of the unofficial tools called Break Decals, and the Mass-Divers who use them, continues to grow. Their power has now evolved to the point where they can defeat even Rommel's force. In order to protect GBN, the champion Kyoya Kujo sets out to contact certain key players.

The Build Divers decide to participate in a Battle-Random mission in which the matchups are randomly determined. Their opponent turns out to be a force called Hyakki, which includes Do-ji, against whom Riku won his first victory, and Ogre, who gave him his first taste of defeat. Riku's heart pounds with anticipation at the idea of assessing his growth by taking on Ogre, using the strength he's accumulated through his previous experiences. Meanwhile, Do-ji's own heart burns with desire for revenge.

The Build Divers have made a striking impression in their debut match, and now challenges from other forces are pouring in. Taking advantage of the opportunity, the members are about to choose an opponent for their next battle. Then Magee appears, informing them that there are things other than battles that only forces can do.

Riku has finally formed his new force, Build Divers, and for its debut he chooses a Force Battle that only teams can enter. As they prepare for the battle one week hence, the members steadily make their preparations, upgrading their Gunpla with the help of Koichi's advice. However, an unexpected problem has come to light.

Riku and his friends have decided to start their own force. Although they are excited to discover their own unique style and strength by forming a force, they are having trouble choosing new members. Shahryar advises them that if they're aiming for the top, they should scout someone experienced, and draws their attention to the splendidly built Kapool that Momo has rented.

The next destination for Riku and his friends is the Perisia Area, a neutral zone where builders from all over the world gather, and it is forbidden to bring in Gunpla without permission. As the three of them walk across an endless desert in Diver form, they are eventually confounded by the mirage-filled landscape, which never changes no matter how far they go. Then a jeep appears, driven by a female Diver called Ayame.

#23 - Tigerwolf of the Sacred Mountain

Riku now realizes the scale difference between himself and Kyoya Kujo, who says he wants to protect the GBN world. As he wonders what he should do to get even a little closer to the champion, Magee offers to introduce him to a fellow Diver. Riku dives into the China-inspired world of the Estania Area to learn which path he should follow, accompanied by Yukki and Momoka, who now has an official account.

Re-watching the fierce battle of the Gunpla Force Tournament, Riku once again yearns to be as strong as the champion. He and Yukio agree to try out the new weapons they've prepared, while Momoka, who has been inspired by them, finally decides to join GBN. The three of them dive into the Dimension, where a Diver who called himself Kyoya asks to accompany them in a Serial Battle mission.

Riku and Yukio reflect on their first experience with GBN. They run into Momoka, who tries to get them to join the soccer club, but she is unable to stop them going back to GBN. Diving into the virtual cyberspace dimension again, they are reunited with Sarah, and instead of playing Gunpla Battle they choose a Collect mission whose goal is to collect a key item.