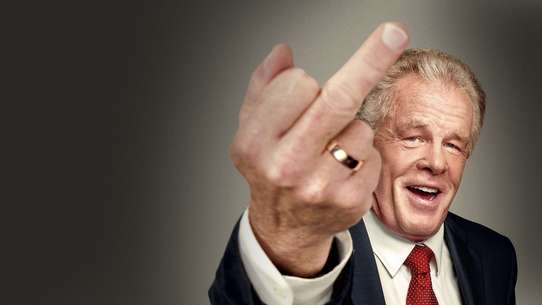 The BEST episodes of Graves

Every episode of Graves ever, ranked from best to worst by thousands of votes from fans of the show. The best episodes of Graves!

Former two-term President Richard Graves embarks on a Don Quixote-like quest to right the wrongs of his administration and reclaim his legacy 25 years after leaving the White House. His enlightenment takes place just as his wife Margaret Graves decides it’s finally time for her to pursue her own political ambitions.

#1 - Not Giants, But Windmills

At a Republican convention, Graves enlists Isaiah’s help to quell dangerous rumors about Margaret’s relationship with Jonathan Dalton. Margaret manages infighting among her team as she prepares to officially announce her candidacy at the convention. Olivia and Jeremy feel the pressure as the FBI starts asking questions about their connection to Arturo. Treadwell escapes his security escort and leaves his mother’s hospital room on a mission.

­After learning his longtime friend and political ally ex-U.K. Prime Minister Trevor Lloyd is dying of cancer, Graves takes off to see him in Baltimore for one last adventure. Isaiah and Sammy join him, and Isaiah gets a peek behind the curtain when she takes him to visit her family. Olivia enlists Jeremy’s help when she realizes she’s in over her head with Arturo and Margaret finds herself falling into familiar patterns as she and Dalton strategize on her campaign.

Graves is forced to acknowledge that his views are on the wrong side of history as he reluctantly attends his speechwriter’s marriage…to another man. Meanwhile, Olivia falls deeper in love with Arturo and Margaret gets a surprising call from an old friend with benefits, tech billionaire Jonathan Dalton. Isaiah tries to prep Jeremy for a local morning news show but he’s more interested in throwing a party.

#4 - Nothing Can Come From Nothing

The family deals with the repercussions of Graves’ unorthodox show of support for Mexican immigrants, and Graves encourages a federal bureaucrat to grant amnesty to a group of illegal immigrants who have sought refuge at his ranch.

#5 - Through a Glass Gravely

With Christmas around the corner, Graves travels across state lines to convince Isaiah to come back to his staff. Olivia calls Jeremy for help during an unexpected, life-changing crisis. Margaret sets up her campaign office and discovers that her kooky opponent may be more of a challenge than she’d anticipated. Treadwell visits his mother during his supervised furlough.

The family and staff try unsuccessfully to prevent Graves from finding out that Martin Treadwell, the man who tried to assassinate him 25 years ago, is seeking a furlough to visit his dying mother. Margaret is approached by the Republican Party and invited to launch a Senate campaign, while Isaiah and Olivia get too close for Isaiah's comfort.

Graves and Isaiah go elk-hunting. Margaret searches for her husband so he will be by her side when the primary results are revealed. Olivia considers having a home birth and Jeremy gets advice as his TV talk show goes nightly.

The family welcomes the America 360 (a 60 Minutes-like new magazine with host Martin Bashir) team into their home for an hour-long special on Graves’ post-presidential life. While presenting themselves as a picture-perfect family, Olivia discovers she’s pregnant as Jeremy’s burgeoning career as a political commentator – built on spiteful comments he made on air about his father – begins to heat up. Pushed to his limits by the family’s shenanigans, Isaiah makes a decision about his future.

Graves tries to rectify mistakes he made dealing with Native American groups during his presidency, and Isaiah’s burgeoning relationship with Sammy becomes collateral damage during the adventure. Jeremy speaks at Treadwell’s furlough hearing and makes a new friend in the process. Margaret and Olivia give each other the confidence boost they both need: Olivia with her divorce proceedings and Margaret with her decision to run for Senate.

Concerned about her husband’s strange behavior, Margaret arranges for a therapist to visit the Graves home and hold a session for the family… that does not go smoothly. While news of Treadwell’s furlough hearing sends Jeremy into an adrenaline-fueled rage, Olivia acts out over her impending divorce. Sammy and Isaiah grow closer as she fights with her deadbeat boyfriend.

Expected to spend his retired years living quietly outside Santa Fe, NM, former President Richard Graves spins out into an existential crisis when he realizes that the policies of his time in office 25 years ago have messed up the country and decides to go on a journey to right his administration’s wrongs.

Graves rights mistakes from his past. Margaret reconnects with her relatives. Olivia purchases a house and receives an unexpected visit. Isaiah has doubts, Jeremy has a revelation, and Samantha takes the spotlight.

Graves and Isaiah take a chaotic trip to Graves's childhood home, while Margaret hits the campaign trail and is challenged by incumbent Senator Jerry North. Olivia fabricates a story about her baby's father. Jeremy is rattled by rumors.

Graves and Isaiah take the family jet on a rogue diplomatic mission. Margaret has an existential crisis after the debate gaffe. Jeremy visits a yoga retreat. A music producer arrives to assess if Samantha could be the next big thing.

Graves makes amends the only way he can. Margaret's Senate race comes to an end. Isaiah pursues what matters most. Olivia hosts a brunch for her in-laws, who make her a surprising offer. Jeremy takes to the stage and Samantha goes on tour.

The entire family is on board for Olivia's home birth. A distraught Jeremy undergoes a psychotherapy session, then insists that Margaret discuss who his father really is.

Graves works on his autobiography in seclusion. Isaiah visits to bring him back. Margaret Graves competes in the primaries with the help of her new campaign team. Olivia and Samantha develop a friendship, while Jeremy embraces his TV success.

Graves reunites with his first wife who reminds him of his idealistic youth. Margaret throws a lavish baby shower for Olivia. Jeremy hires a private eye to quell rumors. Isaiah secretly submits Samantha's song to a radio network.

#19 - Delights of My Suffering

Graves returns to the White House for a state dinner. Margaret networks with politicos but is pestered by Jerry North. Jeremy buddies up with tech billionaire Jonathan Dalton. Isaiah prepares a sushi feast for Katie.