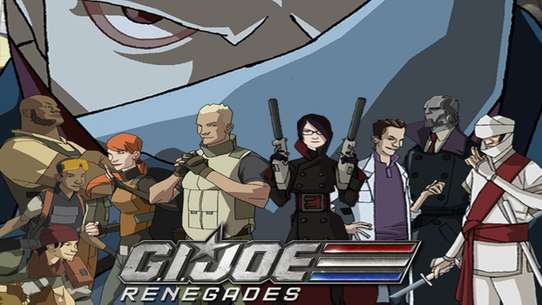 Soldiers ... heroes ... outlaws. On the run after being accused of crimes they didn't commit, six young G.I.s battle to clear their names -- and expose the real bad guys, COBRA Industries. The world thinks this giant corporation is the good guys, but it's really run by evil people who want to rule the planet. It's up to these renegade Joes to stop COBRA and save the world -- and themselves.

As Scarlett's locket is in Baroness and Dr. Mindbender's possession, the Joes end up taking the fight to Cobra Industries by infiltrating their stronghold in order to stop them from finishing the MASS device. Later, the Joes arrive in Washington D.C. in Destro's High Speed Sentry (aka HISS tank) and are surrounded by General Abernathy and the Falcons. Scarlett shows them the proof from the lab that they need to clear their names. In the end, Cobra Industries' secrets are revealed and Cobra Commander declares war on the Joes. The original broadcast included a trailer segment showcasing the 1980s Sunbow cartoon version of Duke stating the Renegades reality was "just a dream", specifically separating the two interpretations. The other counterparts of the Renegades crew refute the Renegades reality, laughing at the description Real American Duke tell them.

While investigating a series of earthquakes that hit along the eastern seaboard in one week, the Joes discover underground tunnels under a Virginia barn being constructed by Cobra with a massive drilling excavator which ends up separating Duke and Scarlett from the others. Like the roads of Ancient Rome, they figure out Cobra is building an underground network with Maglev rails that will allow them to move anything, anywhere, at any time without the public's knowledge making all roads lead to Cobra.

The Joes head to New York to find a missing kid. While investigating, they encounter a Sewer Viper being pursued by a Mindbender.

Flint hires Lt. Hershel Dalton (aka: Heavy Duty) to apprehend his cousin Roadblock while he and the team are in his hometown of Biloxi, Mississippi. Meanwhile, Major Bludd resurfaces and plans his revenge on the Joes.

The prototype Shadow-Vipers and Storm Shadow follow the Joes to Canada, where they are hiding out with Snow Job.

The Joes plan to crash a communications summit held by Baroness at the Cisarovna Chateau where they uncover a mind control scheme involving Cobra Industries' "Black Adder" invention. This cellular device can take control of their competition by cerebral manipulation using Doctor Mindbender's mind-control technology siphoned from Tomax and Xamot's psychic ability. However, the Joes soon discover that someone else has infiltrated the estate with an axe to grind against the Cisarovna family and their reign.

The Joes are trapped in a cult-like commune.

When the town of Green Ridge, is issued a court order to halt the construction of a dam built by Cobra Industries, Baroness and Doctor Mindbender send Firefly to burn this former resort town to the ground, leaving it up to G.I. Joe and a local firefighter to stop him.

Lady Jaye and Flint use Zartan to track the Joes. Meanwhile, the Baroness tries to sneak a camouflage suit to Cobra.

Duke is wrongfully imprisoned when he gets caught up in a chop shop while looking for a replacement part for their vehicle. The rest of G.I. Joe must break him out of prison by having Roadblock get arrested. They soon discover that the prison warden is making prisoners fight each other for his amusement. Now G.I. Joe must get Duke and Roadblock out and expose the illegal activities in the prison.

The Joe team regroups after an ambush from Storm Shadow. Snake Eyes and the Joes must hunt him down and come up with a plan to rescue Jinx, who has been kidnapped by her cousin.

After a experience with what appeared to be the ghost of her father Patrick O'Hara, Scarlett and the Joes go to her hometown, Atlanta, Georgia where she visits her vacant family home. She learns from footage recovered by Snake Eyes that her father invented the Molecular Assembler Scrambler Sender (aka MASS Device) for Cobra Industries to use for teleporting troops into battle. Meanwhile, Baroness commands the Bio-Vipers into attacking the Joes when she learns that the stone in Scarlett's locket plays a part in Cobra Commander's plot to use the MASS Device. The reason for Snake Eyes wearing a mask is also revealed.

Tracing the prototype Techno-Viper's signal following it's defeat, the Joes end up in Scotland. While there, the Joes become trapped inside Destro’s castle during a recon mission investigating a Cobra weapon called the Bio-Dag, a missle that dispenses Bio-Vipers on the masses.

A team of five soldiers--Duke, Ripcord, Tunnel Rat, Roadblock and Scarlett--are sent to investigate a COBRA facility. They discover COBRA's new top secret weapon, Bio-Vipers, but are discovered and are forced to blow the facility to save themselves.

When Scarlett and Snake Eyes sneak into Cobra Commander's secret facility, they find out that Cobra Commander is hiding in the facility after a ninja attack in his own home. The threat of the ninja causes Baroness to call in Storm Shadow to protect Cobra Commander. It is soon discovered that the ninja is actually Jinx in a high-tech suit made by Destro's M.A.R.S. Industries and she learns what really happened the day the Hard Master was killed. Storm Shadow also confesses the truth to her as well and is now masterless when he leaves Jinx to be the rightful leader to the Arashikage clan. She swears from now on the clan will go down the path her father intended--abandon the old ways and embrace the new--using technology.

Adam DeCobray hires James McCullen of M.A.R.S. Industries to work on a project to combine Dr. Mindbender's Bio-Vipers with his failed exo-armor suits. Meanwhile, the Joes infiltrate a Cobra stronghold after receiving information of DeCobray's plans from who they thought was Breaker's masked whistleblower. During the attempt, Mindbender reveals a deadly secret leading DeCobray to reveal himself as Cobra Commander. James McCullen becomes a "Destro" (estranged/alienated one) as he is forced to wear an iron mask as a symbol of his attempted betrayal and a mark of his servitiude to Cobra.

The Joes make a pit stop in a small town in Kansas and quickly find themselves tangling with the Dreadnoks, their leader Zartan, and a cowardly local sheriff. Now they must race against time to help the locals free themselves from the Dreadnoks reign of terror, give the sheriff back his courage, put the whole gang behind bars, and get out of dodge before Flint arrives to arrest them.

The Joes raid Cobra's medical facility to search for "Patient X" (who was previously used as a test subject for the creation of the Anaconda Strain virus) and any other information that would help them prevent an outbreak. They soon discover that Patient X is actually an amnesiac Ripcord and help to regain his memory. Meanwhile, Cobra Commander is told by Doctor Mindbender that this is a good opportunity to track the Joes location and movements since they're interference is now out in the open.

Posing as a preacher that helps veterans, Scrap-Iron kidnaps Tunnel Rat and uses him to test a weaponized "exo-armor" suit for James McCullen and his M.A.R.S. Industries. He meets Ralph Pulaski (aka Steeler) in another suit and they must battle each other to survive. Roadblock then attempts a rescue by allowing himself to be captured, but he is forced into an exo-suit as well. Now the rest of the Joe's have to save him too.

The Joes uncover a deadly Anaconda Strain virus while searching for a missing scientist and learn of Cobra's plan to profit from the sale of its antidote.

The Joes take refuge at Snake Eye's dojo where they train with him and meet his first apprentice Jinx. They also learn about his connection to Storm Shadow and their connected past in the Arashikage ninja clan.

The Baroness tries to regain control of the drive that holds Cobra's secrets.

After surviving the COBRA factory explosion, the team must track a Bio-Viper that escaped the blast before it destroys the nearby town of Springfield. However, the team are framed for the explosion and are now known as the "Renegades" by the media, but when asked who they really are by residents, Duke responds "We're just ordinary Joes sir."

The Baroness contacts mercenary Major Bludd to track down and assassinate a target--a former COBRA employee and internet blogger--who they believed stole one of their data scanners.

When the Joes steal a bio-viper secret project from Cobra they decide to return to Washington D.C. to show General Abernathy. They realize they can't get there before their new prize thaws so the Joes charter passage on Captain Shipwreck's boat. Meanwhile, the viper gets loose mid trip and the Joes must figure out how to stop it while not ending up at the bottom of the sea.