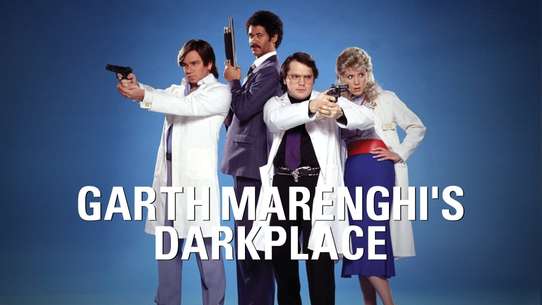 Garth Marenghi's Darkplace is the brainchild of celebrated horror writer and self-styled "fabulist" Garth Marenghi, author of such genre classics as Afterbirth (a mutated placenta attacks Bristol) and Crab! ("One of the three best horror books about crabs I've ever read" - Hard Gore Magazine). Back in the 1980s, he branched out into television production, writing and starring in a series so radical, so scary and so downright crazy that when the bosses of Channel 4 saw what they had on their hands, they ran away screaming, like little girls. Only now, twenty years on and amid the worst programming drought in television history, have the station finally allowed the show on the air. Intercut with new interviews with Marenghi himself and his co-stars Dean Learner and Todd Rivers, Garth Marenghi's Darkplace is perhaps the most disturbing vision of hospital life ever broadcast.

New doctor Liz Ascher arrives at Darkplace Hospital, where a mysterious cat portends disaster. Can Dr Rick Dagless M.D. act in time to prevent all sorts of unspeakable evilness leaking out from the standard-sized hellmouth under Darkplace Hospital itself? It's not going to be much of a series if he does.

#2 - The Creeping Moss from the Shores of Shuggoth

Dr Sanchez's life is in danger from a patient with a fairly bad cosmic broccoli infection. It's down to Dr Rick Dagless, MD to save his buddy - and the world. Or if all else fails, come up with a delicious way of using excess broccoli. It won't come to that, though.

At Darkplace Hospital, lunch is delayed and objects begin flying about the place and generally moving quite a bit more than they would usually do. At first suspicion falls on the hospital's temporary clerical assistant, but Dr Rick Dagless M.D. is determined to find out the truth, even if it kills him - which it doesn't.

Somewhere on the wards of Darkplace Hospital, a man gives birth to a giant eyeball which brings out paternalistic instincts in Dr Rick Dagless, still grieving for the loss of his half-human, half-grasshopper son. But could the eyeball be a potential killer? Well, what do you think? Duh!

A mysterious illness spreads like a particularly virulent disease through the wards of Darkplace, causing doctors and patients to revert to a primal state. It's up to Dr Rick Dagless, M.D. to stop it before he too turns into a chimpanzee or an orang-utan or something like that.

A mist descends on Darkplace - and it's Scottish and/or Scotch. Dr Rick Dagless, M.D. had better do something really good about it, or else all the hospital's resident sassenachs are in grave danger. Probably.