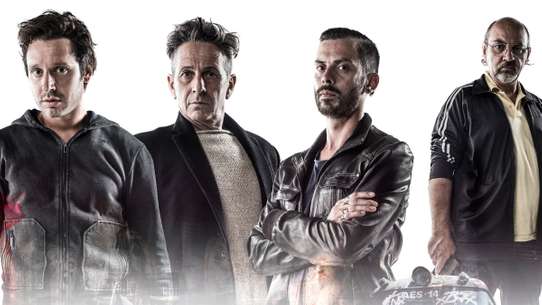 The BEST episodes of Fugitives

Every episode of Fugitives ever, ranked from best to worst by thousands of votes from fans of the show. The best episodes of Fugitives!

"Fugitives" is the story of a failed drug smuggling operation that starts at the border between Bolivia and Chile, the four men who meet to carry out the operation, and the real actors who are behind the business. An intricate web of ambition, interest and corruption proceeds. Nobody is who they seem, all hide a past and unite the human miseries of the imperative to flee, not knowing who among them can be trusted.

Cocaine is brought from Bolivia to Chile to be shipped from there overseas. The group involved is the Ferragut family, controlled from prison by the family's matriarch, Kika. The four men involved in the operation are Mario Moreno, a man without scruples fiercely loyal to Kika; Vicente Ferragut, Kika's son; Salamanca, a former revolutionary; and Tegui, a man with many secrets.

Tegui gets ready to unmask the conspiracy, face justice, and clear his name. However, Minister Buscnan has other plans and nothing will go as planned.

Moreno and Salamanca confront each other while Mario Moreno's past comes into question. Tegui confronts Oliva, who becomes a fugitive himself. Ximena places her trust in Minister Basunan once again.

Cacho Aguilera avenges the death of his son while Chele and the fugitives go back to Santiago on the trail of Irma.

El Chele will pay for his betrayal. The fugitives hide in a spiritual retreat house where passions come to the surface.

After the ambush, the fugitives take hostage the only survivor from the port: the son of the drug trafficker who may be responsible for the deaths of their relatives.

The drug traffickers assault the neighbourhood where the fugitives are hiding out. Ximena confides in Minister Adriana Bascunan.

The fugitives exchange hostages with Cacho Aguilera. However, when one of the parties does not get what was agreed upon, a war begins.

When Kika Ferragut's life is in danger, her son Vincente persuades the group to carry out a suicide rescue mission. Prosecutor Ximena Carbonell is determined to reveal the truth behind the operation at the port.

After a bloody confrontation, the fugitives must split up to flee.

Believing theyare safe, the fugitives wait to cross the border. Fabian Salgado sets up a rendezvous that will complicate Tegui's situation further.

Mario Moreno escapes, but his fellow fugitives will catch up with him. XImena shares information of the conspiracy with the Deputy Ignacio Cordova, who wants to reveal everything to the public.