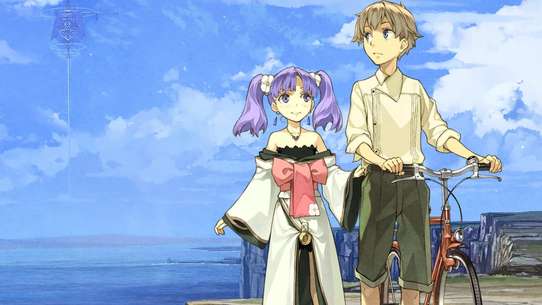 The BEST episodes of Fractale

Every episode of Fractale ever, ranked from best to worst by thousands of votes from fans of the show. The best episodes of Fractale!

The story takes place on an island, where a Fractale System is beginning to collapse. One day, Clain finds an injured girl called Phryne under a cliff. She disappears leaving a pendant. Clain sets out for a journey with the girl-shaped avatar Nessa to look for Phryne and discovers the secret of the Fractale System.

Barrot reveals the whole truth about Phryne and Nessa and the original god of Fractale to Clain. But while Barrot claims that Phryne is his alone, Phryne stabs him and runs away with Nessa following behind. Clain rejoins Sunda and Enri while Phryne decides to merge with Nessa in order to keep Nessa from disappearing. Sunda sends Enri back to the airship before Dias's troops destroys the Temple while he and Clain continue on. Sunda and Clain reach the top of the Temple where they find Archpriestess Moeran with Phryne and Nessa. Moeran grants them and Dias, who arrives moments alter, safety while they witness the restart of Fractale. However, Dias uses the opportunity to blowup Moeran and himself. Sunda and Clain race to Phryne and Nessa, but Sunda pushes Clain into the elevator while holding off the Temple's troops. After Clain confesses his feelings to Phryne, the three arrive at the Sanctum and discover that the original Phryne was an ordinary girl and Nessa was her stuffed rabbit. Afterward, Phryne and Nessa join together and Fractale is restarted. One year later, the people are learning to live without being dependent of Fractale. Clain has returned home and taking care of an unconscious Phryne. Phryne finally awakes, but surprises Clain by behaving like Nessa. After a moment, she reveals to him that she has always loved him too, and that she is happy now. It is left for the viewer to decide if their merging actually worked, with Phryne retaining Nessa's personality, or if Phryne simply changed due to Clain's love confession.

While searching for fresh water, Clain's and Nessa's mini-airship crashes and Nessa becomes "ill". Clain find himself in the care of Megan, a resident of Xanadu which she claims is perfect. Megan gives Clain a tour of the city and helps Clain locate Nessa, who is in the care of Colin. Colin states that Nessa's illness is the result of someone hacking her code. Clain later discovers that Colin and Megan are not as friendly as they appear. Meanwhile the airship crew stumbles upon a naturalist village, while searching for Clain and Nessa, but discover that the villagers are the true residents of Xanadu. While Clain escapes with Nessa, Megan appears and attacks Clain with a virus. Nessa becomes upset and releases an energy field that destroys the virtual city. However, one of Colin's guardians is not affected and shoots Clain as the airship's crew and the Temple's forces arrive.

#3 - Secret of the Underground

With Clain and Phryne in custody, the Temple airship arrives at an underground base and Barrot demands that he check Phryne's virginity. Meanwhile, Sunda enlists the aid of Dias for a rescue mission. Clain wakes up to find a girl who resembles Nessa and claims to be Phryne, who then takes him to a room that contains other clones like her. While Phryne is about have her exam, Nessa interrupts in a rage before storming off looking for Clain. Phryne follows Nessa and the two meets up with Clain. The three discover a room were the clones being destroyed. Seeing the clone that helped him earlier, Clain attempts to save her before the Temple forces arrive. Sunda and Dias begin their attack on the base and with the help of Nessa, break through the defenses. However, Dias charges in and destroys the base. But not before Clain and Phryne find shelter with help from the clone.

After escaping the Temple's forces, Clain is forced to earn his keep aboard the airship by doing odd jobs. He notices Sanko with her visor on while playing with someone, whom she claims is Nessa. But when Clain checks, Nessa is nowhere to be found. Later, Clain encounters Phryne and tells her that he believes that Nessa is still around, but she will not appear. Phryne answers that it is because Nessa is jealous as she has become attached to Clain. Soon, the airship begins to experience problems and flies into a thunderstorm, which Clain believes is Nessa's doing. The crew begins looking for Nessa, which turns into a game of hide-and-seek. Thinking that Nessa will not come out while she is around, Phryne attempts to escape the airship. Though Clain tries to talk Phryne out of it, it is Nessa who "finds" Phryne and convinces Phryne to stay.

Clain and Nessa catches up with Sunda and tells him that Phryne had returned to the Temple. While Phryne confronts Archpriestess Moeran, Sunda and Clain take a mini-airship and enter the Temple. But Moeran, who is also a clone, hates Phryne because of the younger's greater importance and attempts to strangle Phryne. Meanwhile, Nessa, who remained on the Danan, begins to loose form. After a message from Dias, Enri decides to enter the Temple with Nessa so that they can join Clain and Phryne. Phryne escapes from Moeran during the commotion while Clain, Sunda, Enri, Nessa, and Dias meet up. Although Dias encourages Clain and Nessa to search for Phryne, his real goal is to kill Phryne. Phryne encounters Dias's soldiers but barely escapes before finding Clain and Nessa on the other side of a transparent wall. However, Barrot appears on Phryne's side and claims that he and Phryne are bound together.

While taking a walk, Clain has an encounter with the mysterious Phryne who was running away from a gang of pursuers. Clain and Phryne soon become friends, but in the following day she disappears without saying a word, leaving a mysterious item behind.

After the destruction of the Temple base and the continued deterioration of Fractal, the Temple begins attacking the home villages of the Lost Millennium factions. While the faction leaders meeting to discuss what to do, Dias informs them that Sunda possess the "key" to restarting Fractal. Viewing the Temple as backed into a corner, the factions agree to Dias's plan to join forces and attack the Temple and destroy Fractal. Meanwhile Phryne tells Clain the truth about Nessa and herself and how they must eventually become one in order to restart Fractal. Although Clain wants to join Sunda in the attack on the Temple, Sunda instructs Clain to stay behind instead and protect both Nessa and Phryne. However, the night before the attack, Phryne sneaks out and returns to the Temple to put a stop to everything. When Clain and Nessa discover Phryne missing, they set out after her.

The members of Lost Millenium kidnap Phryne and the temple puts a price on their heads. Clain decides to not get himself involved in the conflict, and just when he is about to run away with Nessa, the village is attacked by the temple's forces.

While the airship undergoes repairs, Clain and Phryne encounter refugees who found themselves outside the range of Fractale's signal. During an argument between a refugee and man who had taken pictures while Phryne was skinny-dipping, a man named Dias appears and invites the refugees to a nearby town. The photographer runs off and Clain follows him and learns that the man is an antique collector. The collector invites Clain to return that night, which Clain does with Phryne in tow. Along the way, they see Dias's group feeding and vaccinating the refugees. The two arrive at the collector's home and the collector temporarily boosts Fractale's signal to show what the town looked before the signal was lost. However, the refugees learn that the "vaccinations" were actually removing the terminals from their bodies. When a refugees attempts to flee, Dias has him killed. Afterword, the collector gives Clain the camera.

While examining the brooch left by Phryne, Clain finds that Nessa, a doppel in human form, was sealed inside it. After trying to dispose of her, he ends up accepting Nessa's company, just before being captured by the same trio that was pursuing Phyrne.

Clain and Nessa are taken to a village that is the headquarters of "Lost Millenium", an organization that is rebelling against the Fractale System. Soon after, Clain is caught up in a vicious confrontation between the rebels and the priestesses, where he meets Phryne again.