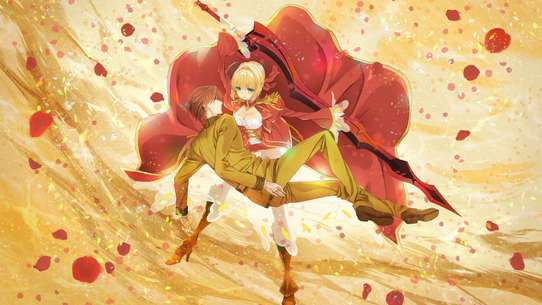 Waking up in a strange virtual world with no recollection of the past, Hakuno finds himself forced to fight for survival in a war he does not understand for a prize beyond value; the opportunity to have one's wish granted. With only an enigmatic "Servant" by his side, Hakuno Kishinami will have to face both friends and foes in battles to the death in order to not only gain possession of a mysterious object known as the "Holy Grail," but also to find the answer to the most important question of all: "Who am I?"

The only way out of the time loop they're trapped in is to defeat Alice. Hakuno is hesitant, despite knowing how many she's killed before.

Hakuno and Saber meet Rin, a self-proclaimed Resistor. Hakuno learns that he must kill Shinji, the Floor Master, in order to ascend to the next level.

Saber proudly introduces herself and prepares Hakuno for the war ahead. But finding another Master to battle proves to be harder than anticipated.

Now on the sixth floor, Hakuno and Saber are suddenly attacked by a swarm of beings who look just like Rin and Rani.

At long last, the final battle begins. Hakuno’s ultimate opponent reveals his identity and the reasons for constructing this war.

Hakuno feels a rage build up inside of him as he lives through the repetitive virtual world of SE.RA.PH, and it fills him with a sense of purpose.

After ascending to the mysterious third level, Hakuno meets Alice, a cyber ghost living alone in this haunted wonderland.

Rin gets them ready for the fifth level, where a Berserker wanders. There’s no floor master, but something perhaps much worse.

Rani VIII tells Hakuno about the Floor Master, Dan Blackmore, and they learn why he can never ascend -- no matter how many lives he takes.

After making it to the next level, Hakuno and Saber are immediately ambushed. Just as things seem hopeless, they meet a stranger named Rani VIII.

Hakuno and Saber reach the final floor, where a thousand years ago, a previous incarnation of Hakuno defeated the Master before perishing.

Now back on the lowest floor, it seems as if Hakuno and Saber have to start all over again -- and they're running out of time.