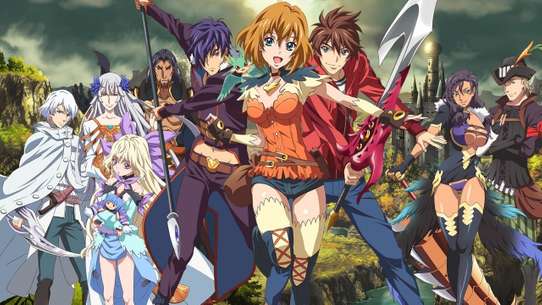 The BEST episodes of Endride

Every episode of Endride ever, ranked from best to worst by thousands of votes from fans of the show. The best episodes of Endride!

Shun Asanaga is a 15-year-old junior high school student with an optimistic and bright personality. One day, he finds a mysterious crystal in the office of his father, who is a scientist and businessman. When he touches it, the world becomes distorted, and he is sent into the world of Endra. Emilio, a prince of the kingdom of Endra is nearing his 16th birthday and despises the reigning king Delzain. Since Emilio is now at the age when he can inherit the throne, he takes up a weapon and attempts revenge. However, because Emilio is too weak, he is captured by Delzain and put in prison. When Emilio is in grief, the wall of his cell becomes distorted and Shun appears from there with two goals: return to his own world, and complete his revenge. What future lies ahead for the two boys trying to survive in Endra, yet raised in two different worlds?

After taking to the seas on a battered ship, the Ignauts head for an island to recruit the help of the Zoozians.

Upon reaching Babylon, the Ignauts are deceived by more than its size and the traps that await inside.

Shun Asanaga, a young man with an obsession with crystals, finds himself pulled into a world within one.

After escaping the castle, an encounter with an old friend helps reveal some of the mysteries surrounding Endora.

As Delzaine and the Ignauts both close in on Babylon, Pascal attempts to solve the mystery of the decreasing Warp Particles.

While fields and forests decay, deep under the dungeons of the castle, Shun and Emilio learn more about the past before being swept away.

When they're ambushed by a band of revolutionaries, Shun and Emilio make surprising new allies.

The showdown reaches full swing as Babel starts up, bringing an end to an enemy in more than one way.

Though troubled by his father's actions, Shun learns about his motivation and the reason they're able to travel between worlds.

While Demetrio and the Ignauts battle Ibelda, Shun, Emilio and Falarion go to Tir Na Nog to destroy the device draining Warp Particles from Endora.

After hearing Asanaga's shocking declaration, Shun and Emilio discover secrets of the past, the truth of their families, and a shared bond.

Back in Endora, the Ignauts face up against a monsterous Ibelda and learn about the ancient ruins which may be funneling Warp Particles to the surface.

While visiting the port city of Ametius to obtain a ship, a deadly killer threatens the adventure.

Taken to the surface, Shun introduces Emilio to his familiar world and a confrontation with Shun's father triggers some of Emilio's forgotten memories.

The final battle to determine the fate of Endora balances atop the high-reaching spire of Tir Na Nog.

Alicia discovers the truth about her father during a surprise encounter with dragons.

Lacking in numbers to revolt, the Ignauts consider an alliance with the very group that attacks them.

Shun and Emilio escape to a hideout but soon abandon it to begin their journey to defeat Delzaine.

After reuniting with Pascal and Alicia, Shun's determination to return home is stronger than ever.

When they attempt to save a crippled village, the Ignauts run into an old enemy and make an unexpected new ally.

In order to recruit the help of the Gradido and the island Zoozians, the Ignauts must fight back against a naval invasion.

While Pascal and Joseph are busy inspecting Babel, the others look back on how far they've come.

No sooner is the group welcomed home to the castle than a menace appears in the forest and threatens the capital.

With chaos and riots on the rise, the Ignauts make plans to bring order while marching back towards the capital for more research.