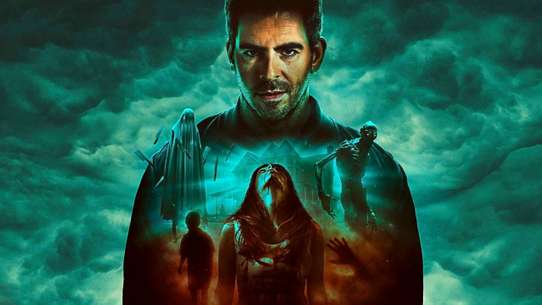 The BEST episodes of Eli Roth's History of Horror

The series brings together the masters of horror — icons and stars who define the genre — to explore its biggest themes and reveal the inspirations and struggles behind its past and present. Each episode takes viewers on a chilling exploration of how horror has evolved through the eras and impacted society, as well as why loyal fans remain addicted to fear. The series features A-list storytellers including Stephen King, Quentin Tarantino, Jordan Peele, Jason Blum, Robert Englund, Linda Blair, Tippi Hedren, Rob Zombie, Haley Joel Osment, Jack Black, John Landis and Jamie Lee Curtis, among many others.

Zombies are the monsters of the 21st century, and America's major contribution to horror. What set off zombie fever? All roads lead to George Romero, who made zombies a metaphor for social ills.

Slasher films killed in the '80s, but their violence, perceived misogyny, and endless sequels almost ended the genre. Supernatural killers Chucky and Freddy saved them from extinction.

The history of monster movies is also the history of the evolution of special effects technology; whatever their size or shape and whatever they represent, for many horror fans monsters are the best part of the genre.

Sometimes disgusting, body horror films makes audience members question their prejudices against physical difference, their attitudes about sex and gender, their fear of disease and contamination, and how much appearance determines destiny.

The apocalyptic visions of "World War Z," "Train to Busan," "Zombieland," "War of the Worlds," "I Am Legend," "The Omega Man," "10 Cloverfield Lane," "Night of the Comet" and "The Invasion of the Body Snatchers."

Monsters hold a special place in the history of horror. Stephen King, Tippi Hedren and Joe Dante weigh in on the killer predators in nature, the nightmare creatures of the fantastic, and the monsters inside us, waiting to escape.

Ghost movies have been with us since the dawn of cinema. Some ghosts are benevolent, some ghosts are malicious, but they all represent the mystery of what happens to us after we die. Stephen King, Haley Joel Osment and others break down the appeal of spooky spirits.

The fear that demons will enter our bodies and make us do terrible things has inspired some of the most frightening films ever made. Jordan Peele, Linda Blair and Diablo Cody discuss masterpieces such as Rosemary's Baby and The Exorcist.

Modern vampires come in many guises, but they all address our fascination with sex and death. From the ghastly Count Orlok to the glam vampires of True Blood, John Landis, Josh Hartnett, Mick Garris and others take a look at why thirsty fiends are endlessly appealing.

Sometimes horror sequels fall far short of the originals, and sometimes they are even better.

The witch is a towering figure in the history of horror. The archetypical evil witch is everything mainstream religion tells us a woman should not be - and that unapologetic, very female power frightens men and fascinates women.

Home is where the heart is, unless one lives in a house of hell. Whether they're filled with specters or psychos, every house of hell pokes at illusions of comfort and safety.

Nine Nightmares is a deep dive into nine uncategorizable films that push the boundaries of horror. Great films that entertain us and provoke us. Films that put society under a microscope, making us question not just what we fear, but why we fear it.

Parents are supposed to love their children, no matter how awful their kids may be. The films highlighted in this episode may not solve the mystery of where evil comes from, but they have a terrifically terrifying time raising the question.