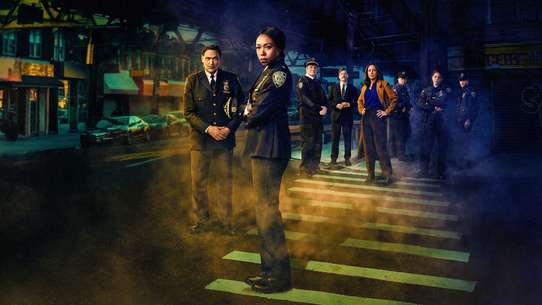 Regina Haywood is the newly promoted deputy inspector of East New York, a working-class neighborhood at the edge of Brooklyn. She leads a diverse group of officers and detectives, some of whom are reluctant to deploy her creative methods of serving and protecting in the midst of social upheaval and the early seeds of gentrification.

#1 - When Dinosaurs Roamed the Earth

When a retired cop who was planning to go public with claims of corruption dies and it's initially ruled suicide, a skeptical Haywood directs her team to investigate. Also, Bentley and Quinlan grow closer.

When a child goes missing, Haywood encourages Yenko to use his connection to a witness in the race to locate the young boy. Also, Chief Suarez lands in hot water after an arrest goes viral, and Sandeford unexpectedly crosses paths with an ex-girlfriend while on the job.

When a prisoner serving a life sentence escapes, the 7-4 teams up with the U.S. Marshals to track down the convict before he finds the cop who put him away: Deputy Inspector Regina Haywood. Also, Officer Quinlan struggles with her living situation.

When a man is shot during a supermarket opening, Detective Morales suspects the crime is related to an unsolved assault case she was pressured to drop years earlier. Also, Officer Quinlan discovers pivotal new details that could help solve a cold case close to home.

When the team receives an unusual call for police assistance, they must employ creative methods to defuse a critical family conflict. Also, Haywood's mother encourages her to connect with her estranged father, and rookie officer Bentley bristles at career advice from his mentor, Sandeford.

Deputy Inspector Regina Haywood, the newly promoted boss of the 74th Precinct in East New York - a working-class neighborhood on the edge of Brooklyn in the midst of social upheaval and the early seeds of gentrification. With family ties to the area, Haywood is determined to deploy creative methods to protect her beloved community with the help of her officers and detectives. But first, she has the daunting task of getting them on board, as some are skeptical of her promotion, and others resist the changes she is desperate to make. Regina Haywood has a vision: she and the squad of the 74th Precinct will not only serve their community - they'll also become part of it.

When four party-goers fatally overdose, the 7-4's investigation is impeded by an ongoing DEA operation, and Haywood turns to Suarez for help. Also, Yenko deals with tension at home, and Sandeford prepares for a date with his ex, Tamika.

During an investigation into a fatal shooting, the team crosses paths with Demonté Green, a smooth-talking businessman who may have been the intended target. Also, Deputy Inspector Haywood tries to help a troubled teen, and Detective Killian finds himself at odds with his girlfriend, Corinne, after she hires an ex-con to work at their new bar.

When two homicide victims – a young man from the housing projects and a fast-rising hedge fund partner – are discovered in the community, Deputy Inspector Regina Haywood fights to ensure both cases receive the same resources to bring the perpetrators to justice.