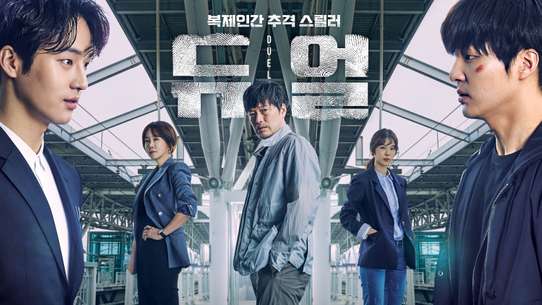 The BEST episodes of Duel

Every episode of Duel ever, ranked from best to worst by thousands of votes from fans of the show. The best episodes of Duel!

Jang Deuk Cheon is the chief of the crime squad. He is a kind, caring and friendly father to his young daughter. It’s a tough job and he comes from an equally dangerous past, but he never lets his family hear it. It’s the dream life, until the chief’s daughter is kidnapped. And after trying to get her back, Jang Deuk Cheon sees that one man is always involved. Actually, make that “two men.” Sung Joon is the mysterious man somehow connected to the disappearance of Jang Deuk Cheon’s daughter. Sung Hoon is his clone. Or is Sung Hoon the original and Sung Joon the clone? Or are they both clones? Are they both real? And why do they have contrasting personalities? Why is one calm and collected while committing murder while the other is literally terrified of his own shadow? All these questions don’t matter to Jang Deuk Cheon. What matters is finding his daughter. Whether that means getting through one clone or two, he will do it. But as the detective soon learns, things aren’t that simple. While one clone is a murderous psychopath that removes organs from his victims, the other is a kind soul. And both of them need each other to survive. Now it’s a battle between the forces of good and evil, and a man and his daughter are caught in the middle of the most dangerous kind of duel.

With Deuk Cheon’s help Sung Joon and Mi Rae escape the laboratory safely. Mi Rae agrees to proceed with the transplant of her bone marrow since Soo Yeon’s condition got worse. However, the vaccine is taken away by Sanyoung Pharmaceutical and Sung Joon visits Sung Hoon to ask for help. What does it mean to be ordinary and human like? The search for it comes to an end.

Mi Rae is kidnapped by Chairman Park’s order. They test Mi Rae’s bone marrow to check the compatibility. Chairman Park is in much need of her bone marrow more than anything else to survive. Mi Rae is locked up in a place where no one can find but Deuk Cheon and his team make an attempt to rescue her. The battle between lifesaving and life killing continues.

Sung Joon slowly recovers his memories when he meets up with his old friend. Deuk Cheon succeeds in kidnapping Park Dong Seul and demands Sung Hoon to follow what he says. Meanwhile, Mi Rae figures out why Sung Hoon wants to kill Park Dong Seul.

Deuk Cheon finds out that Mi Rae is actually Ju Hee and she’s the daughter of Doctor Han Yu Ra. Mi Rae gets severely injured from the motorcycle accident and undergoes a surgery. Meanwhile, Sung Hoon decides to ask Doctor Han directly for the behind stories of the experiments conducted on him and Sung Joon.

A dead body that looks exactly like Sung Joon and Sung Hoon gets discovered. All the organs were extracted from the dead body. The secret behind illegal cloning examination gets revealed. Meanwhile, Deuk Cheon finally gets to find his daughter, Soo Yeon.

Deuk Cheon finds out that Soo Yeon got kidnapped because of how he ignored young Sung Hoon’s cry for help 12 years ago. Deuk Cheon, Mi Rae, Ik Hong, Soo Yeon, and Sung Joon enjoy a day out together after they found Soo Yeon. Meanwhile, Jo Hye finds out that the Chief Prosecutor was involved in the experiments conducted by Sanyoung Pharmaceutical Company.

Deuk Cheon learns that the stem cell treatment caused cancer to spread all over Soo Yeon’s body. He must find the vaccine in order to save his daughter. Meanwhile, Chairman Park announces to his two children that he will give his shares of the company to the one who can save his life.

Sung Joon recovers from his injuries and stays with Mi Rae and Ik Hong. Deuk Cheon meets up with Sung Hoon and decides to satisfy his demand in order to find his daughter. Meanwhile, Prosecutor Choi meets Park Dong Seul who was another victim from the illegal organ transplant.

Sung Joon acts as Sung Hoon and visits the hospital and meets up with Boss. Sung Joon tries to make a deal while Deuk Cheon rescues Soo Yeon. Meanwhile, Prosecutor Choi finds out that Sanyoung Pharmaceutical Company is responsible for creating both Sung Joon and Sung Hoon.

Sung Joon and Deuk Cheon run into Prosecutor Choi in the dog fighting arena. Prosecutor Choi tries her best to catch Deuk Cheon, but Deuk Cheon finds a way out. Meanwhile, Mi Rae looks for her biological father through the data left by her mother, but does not find any solid evidence.

Prosecutor Choi decides to go undercover investigating for Sanyoung Pharmaceutical Company and meets up with Chairman Park San Young herself. Sung Joon finally meets Doctor Han Yu Ra who used to look after him and Sung Hoon like their mother. Meanwhile, Sung Hoon gets shocked when he finds out that Doctor Han Yu Ra was behind the cloning research.

Deuk Cheon remembers the face of the kidnapper who kidnapped his daughter, Soo Yeon. When he encounters two men that look exactly like the kidnapper, he gets confused. Sung Joon, who gets caught first, claims that he doesn’t remember anything. Prosecutor Choi doesn’t believe his words, but Deuk Cheon thinks that Sung Joon has an accomplice.

Prosecutor Choi receives a murder notice that’s supposedly from Sung Joon. Deuk Cheon and Sung Joon learn that the next target is Choi Joo Shik. Meanwhile, Mi Rae tries looking for the person that was listed on the research paper that her mother left behind, without realizing that she is putting herself in danger.

Deuk Cheon is a Chief Detective who earns day to day for her sick daughter, Soo Yeon. His wife passed away when she was pregnant with Soo Yeon. One day, Soo Yeon gets kidnapped by a mysterious man. Deuk Cheon does his best to find the culprit, but ends up meeting two culprits who look exactly the same.