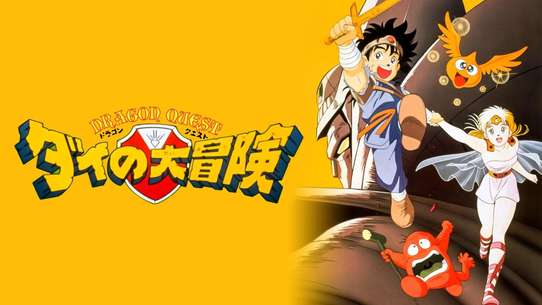 The story begins with a young boy named Dai remembering a story told to him by his adoptive grandfather, the monster magician Brass, about the defeat of the Demon King Hadlar by the hands of a hero known as Avan. After the defeat of the Demon King Hadlar, all of the monsters were released from his evil will and peace reigned supreme around the world once again for ten years. Some monsters and demons moved to the island of Delmurin to live in peace. Dai, the young protagonist of the series, is the only human living on the island. Having been raised by Brass and with his best friend, the monster Gome, Dai grows up dreaming of becoming a hero.

#2 - I'll protect Leona!! Showdown!! The Hero versus the commander of Ice and Flame

#4 - The focus of revenge is Avan!? The strongest sword of black hatred!!

#5 - The fighting spirits of darkness!

#8 - The Exorcism spell that calls a miracle!! Friendship now here...

#9 - Avan dies from a self-sacrifice spell!? Shoot the ultimate technique.

Dai can do nothing but watch. Finally, the showdown between Avan and Hadlar is concluded.

#10 - A direct hit from the emblem of anger!! Cool down the Beast King Crocodine

#11 - Cross the ocean Dai! The commanders of the Demon Lord's Army gather

#13 - The bond between parent and child is a sad fate! The fight between father and child!!

Avan turns into a dragon and attacks Dai. Dai fights back to no avail. To defeat Avan’s flames requires Wave Slash.

#21 - The strongest secret is the Dragon Fighting Spirit!? Protect our Dai!

#22 - The sign of graduation is provisional, Hadlar VS Avan

Avan is overpowered by Hadlar, who is now stronger than ever. To protect his students and the world, Avan gathers the last of his strength and faces Hadlar.

After the harrowing events that transpired, Dai says his goodbyes to all his monster friends on Delmurin Island and begins is great adventure with Brass.

#25 - The one we call our teacher Avan, the memories left with the Magic Bullet Gun.