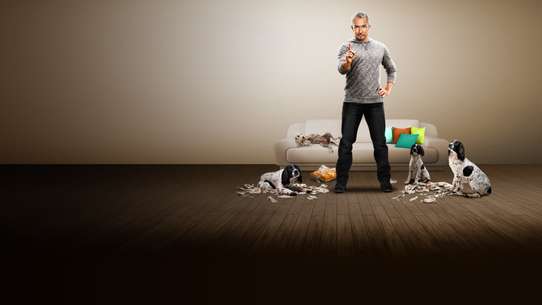 The BEST episodes of Dog Whisperer

Dog Whisperer follows well-respected animal behaviorist Cesar Millan as he works to help dogs with behavior problems, and their human families. These problems range from excessive barking to behavior, that if not corrected, could leave the owners little choice but to euthanize the dog. Mr. Millan describes his work as "rehabilitating dogs, and training people." Dog owners can learn from him ways to establish a balanced relationship with their dogs that will help to prevent these problems.

Aggressive dachshund, Lotus, attacks roommate Sheri when petting or sitting next to the dog.

An aggressive English bulldog/Lab mix; a cocker spaniel with a life-threatening appetite for paper products.

Nate Brouwer owns a stand-up paddleboard production business and a paddle boarding touring business, he and girlfriend Charnae Wright would like to take their dogs Stella and Nala along. However, the dogs are constantly fighting and one fight ended spilling blood. Nate and Charnae have active lifestyles and want to include their dogs, but the situation is leaving the canines home alone. Poodle mix Phoebe fears men resulting in attacking any man that entered the house. Even Dena Spencer's nephews who live with her are not safe. Dena teaches special education and thought she had the patience to work though the behavioral issues but now Cesar is called in.

As an artist on the rise, Daniel Maltzman relies on inspiration, but he can’t inspire his 1 ½ year old Pekingese, Pekaso, to eat or drink. Pekaso refuses to eat any kind of dog food, top shelf or not. Nothing Daniel does seems to make a difference. Pekaso also has issues when it comes to drinking her water.

Meet Luna, a Lab mix, who has extreme fear of dog parks, walks and noises at home. Her owner, a music instructor, would love to take his beloved dog to his rehearsals, but he can't. It's time for Cesar to step in, but has this case gone too far, even for the Dog Whisperer? Next, Cesar heads to Florida to meet a pack of dogs that spends its days carefully keeping the port of Miami free of drugs, explosives and dangerous chemicals. But off the job, these six intelligent animals can't interact without incident. Can Cesar help these K9 sniffers learn to play together as well as they work together?

Cesar is reunited with more than 100 of the dogs he has helped to rehabilitate.

A veteran bomb-sniffing Labrador retriever develops severe symptoms of PTSD after a stint in Iraq. Will Cesar be able to help this heroic canine?

In fifteen years, Daddy has proven to be the perfect dog, obeying Cesar’s every command and even assisting Cesar on some of his hardest cases. But Daddy, like all dogs, began his training as a puppy. In this special, Cesar decides to raise four different breeds with different breed-related characteristics to show people how any dog can be shaped into the perfect dog.

An Australian shepherd can't bear to be away from his owner; a beagle makes trouble for a pack of foster dogs; and an Italian mastiff won't get in the car.

Cesar rides along with Last Chance For Animals as they pick up a load of dogs from a potential puppy mill and helps spread awareness of some of the illegal practices that take place in incompliant kennels.

Dog Whisperer: Bear & Angel and Lorelei (unapproved one page promo description) German shepherd Angel came to owners Joe and Sandra Carrick in December 2004, and Bear, another German shepherd, arrived in April 2005. The dogs got along fine for awhile, but when they started going to day care they began fighting each other, determined to draw blood. Their daycare tantrums are very traumatic to Sandra and the staff of the facility, will Cesar dare to turn this daycare dilemma into a daycare dream? Then, Francine & Michael Markows miniature schnauzer Lorelei would bark and even nip when their grandchildren would run around on visits, sometimes leaving the children in tears. The problem became so bad, that the grandkids are no longer allowed to visit. The Markows dont want to give up Lorelei, but they wish that their family were more willing to work on the problem instead of avoiding it. Can Cesar unite this divided pack?

In the first segment, Cesar works with a couple who have an out of control lab who was even kicked out of a dog training class. In the second segment, he has a more complex problem to solve. A young couple has recently married and one of their dogs is having a hard time with the changes. He has become quite aggressive, and since they are expecting their first child, they are anxious to bring both their dogs under control so they will not be a threat to the new baby. In the third segment Cesar has an easy time teaching a shar pei to not attack the TV every time there are dogs on the screen.

For twenty years, Cesar has dealt with all kinds of canines. This episode features several of Cesar's toughest cases including: Matilda, the skateboard munching bulldog, vicious Min Pin, Chip, and ferocious Chihuahua, Bandit, just to name a few. See how Cesar deals with each of these unique issues in this special episode of Dog Whisperer. Plus updates on how the dogs are doing.

On a Nebraska farm, an Australian shepherd named Buster is protecting too well. Cesar helps Holli, an American Stafford Terrier who was injured in a school bus accident. Oscar nominee Virginia Madsen and her son Jack need help with a companion for their french bulldog Spike.

Battle of the Boyfriends Anita Eble has a herding mix named Boyfriend, who just happens to hate her human boyfriend, David Kovach. Boyfriend has bitten David twice, but Anita doesn't want to euthanize him as David wants her to. Cesar establishes that Boyfriend was not aggressive in the beginning, but fearful; nurturing that fear can create fear-based aggressive behavior. Boyfriend should not have affection before exercise and discipline. He asks Anita how she reacts to the aggression. She says she screams at Boyfriend. Cesar explains that this does not control aggressive dogs. David reiterates that he thinks Boyfriend should be put down-he doesn't think Anita can follow-though, and that he will be bitten again. Aside, Cesar states that David is blaming the dog, and it's not the dog's fault. It's the responsibility of the owner. He asks David to keep an open mind. Anita is very anxious when Cesar enters Boyfriend's pen and Cesar reminds her that she needs to have a relaxed energy and an assertive approach. Cesar sits with his back to the dog, in order to allow Boyfriend to calm down near him. (It may need to be said here, as in the opening of the show, that one should consult a professional before attempting these techniques.) Once Boyfriend is calm, Cesar has David approach with his own dogs, who are actually the ones to start things. Boyfriend avoids rather than reacts to them. Cesar says that he is not issuing any commands, that it is his energy controlling the behavior. "The presence of a human can actually change the behavior of a dog." Cesar gives Anita homework to practice, and she is very encouraged by Boyfriend's calm behavior with Cesar, and commits to the work ahead. What's It All About, Alfie? Alfie is an English Bull Dog owned by Daisy Fuentes and her fiancé, Matt. Daisy is concerned about Alfie's newly-defensive behavior toward visitors to the home. Cesar notes that Daisy's Soft-Coated Wheaton terrier, Rita. is hyper, and Alfie

Maya, a Border Collie/Spring Spaniel Mix lunges towards any small animal nearby, causing a further injury to her owner who recently had major neck surgery. Sara, a rescued Sheperd mix with aggression. Then, a pushy poodle in Omaha, Nebraska needs Cesar to help grow out of her puppy behavior.

It's the age old rivalry of mail carriers vs. dogs. Cesar joins one postal worker on her daily route and teaches her some practical tips for thwarting dog attacks. Then, Cesar meets hyperactive Pomeranians Woody and Wallie. Whenever they are left alone together they attack each other. Finally, Cesar meets Kane, a Swiss mountain dog, who is very aggressive around food. Can Cesar help these problem dogs?

“Chihuahua’s from Hell” highlights the demonic demeanors of one of Dog Whisperer’s most challenging breeds. In this one-hour special, Cesar revisits the hellacious stories of Paris, Bandit, and NuNu as well more recent stories like Amalie, the Mastiff dominating Chihuahua mix. Peanut, another devil dog, terrorized her owner’s family with her salty disposition.

Bodhi has developed an unpredictable aggression, Maltese dogs named Maggie and Molly have become too territorial, and Bojo attacks his fellow canine companion. How will Cesar help?

Baring fangs and dripping saliva, a massive 150-lb. beast protects the home of one of music's most beloved performers - legendary recording artist and two-time Grammy winner Miss Patti LaBelle. Patti rarely comes too close to him - out of utter fear and fearing his aggression could lead to an attack. Can Cesar create a harmonious connection between the inspiring singer and the intimidating beast? Then, Cesar heads to Chicago to help Chicago art teacher Mary Jane who has adopted a 6-year-old rottweiler.

Casanova is dog aggressive, but only when on the leash. Previous classes and trainers have failed to curb this anti-social behavior. Sooner, a champion line Jack Russell (called a Parson Russell now) and Trace, a Queensland heeler, fight frequently.

In this episode Cesar works with two very challenging cases, a Dalmation who has been adopted by the fire fighters on Wilshire Blvd. in Los Angeles, and a bull dog in Texas.

Before leaving the UK Cesar help to rehabilitate a Klee Kai who lunges and snaps at any dog that comes close, a Collie mix scared by a loud noise and now refuses to go out anymore, and a Labrador who is so energetic that it's hard to tell if he’s being friendly or dangerous.

Nicki is a highly dog-aggressive Rottweiler who came from a horrible situation in a homeless camp. Kathleen Daniels and her son Donald rescued him and now want to get him past this aggressive behavior so that he can have the life he deserves. Cesar and his wife, Illusion, test Nicki with one of their dogs, and Nicki does quite well. They decide to evaluate him further by taking him to Cesar's Dog Psychology Center. Nicki's calm-submissive behavior away from Kathleen and Donald shows Cesar that they are not consistently demonstrating leadership. Nicki spends two weeks at the Dog Psychology Center learning to be part of a pack and being worked with daily. At the end of the 14 days, Cesar takes Nicki home, along with a few of his new doggie friends; Nicki has no trouble allowing them into his territory.