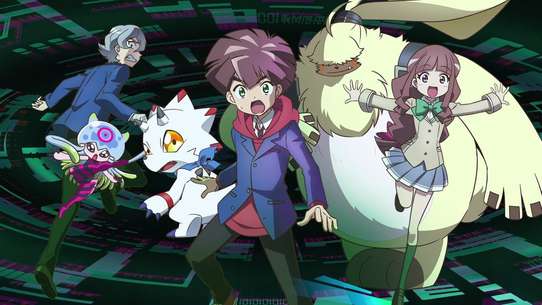 In a relatively near future, an innovative technology has emerged. On social networks, rumors are circulating about strange phenomena whose authenticity is unknown, referred to as "Hologram Ghosts". Hiro Amanokawa is a high school freshman at Hazakura Academy, who by activating a mysterious device left behind by his father called "Digivice", has the effect of making unknown creatures that cannot be seen by ordinary people, the Digimon, visible to his eyes.

Ruli is invited to a party for the super high-end brand, SV. Their business branding is centered around blood and the color crimson. However, something about this bothers Angoramon and the gang decides to investigate.

Hiro and Kotaro visit their sister school in Kamakura. As Hiro participates in a traditional dance to calm the soul of the last young lord of the Hojo clan, he suddenly disappears. He was taken by a Digimon who is a diviner for the Hojo clan.

Digimon are being killed indiscriminately, and the gang comes face to face with an urban legend. Hiro and the others formulate a plan to take the rumored executioner down, when something unexpected happens.

Recently, something seems to be attacking all the people who interact with Yuto. Yuto decides to ask his friend, Hiro for help. Along with Ruli, Hiro and the gang investigate the mysterious phenomenon behind Yuto’s acquaintances turning into plants.

Angoramon runs into an old friend from the Digital World, Digitamamon. Digitamamon is living alone in an empty mansion. The gang all go to visit, but they soon learn that the mansion is known as a man-eating mansion.

A voice whispers into the ear of Shadramon, who is afraid of returning to Digitama form and forgetting everything. It says, “I'll leave those memories for you.” Soon after, Kiyoshiro realizes that something is wrong with his friend, Tamotsu.

Hiro and Ruli visit a theme park when a couple of Digimon show up looking for BlackGatomon, who has been visiting Hiro. Things get heated when Hiro's confronted, and Gammamon steps up to fight.

Something is turning the Digimon all over town into violent bugs that attack people! Clockmon comes to seek the help of Hiro and the gang to stop this violence, but…

#9 - The Mystery of the Museum

Ancient Egyptian mummies are on special display at the museum. There is a rumor that a huge man fully covered in bandages was witnessed kidnapping people in the area. Hiro and Gammamon decide to visit the museum to investigate.

Kids around the neighborhood are turning into human geckos, and Hiro realizes one of them is his friend, Nanami. He consults the rest of the gang, who decide to help him with the investigation, when Ruli turns into a gecko herself…

Ruli and the others go visit her ancestral home. There they find that the village is being terrorized by a local superstition, “the legend of the werewolf”. It is said that a sacrifice is needed to appease the werewolf's wrath and…

A first-year student in Hiro’s school is able to get his hands on rare and sought-after merchandise. Somehow, this is connected to the mysterious shaking buildings which Hiro hears about from Espimon.

On social media, rumors of a mysterious phenomenon, known as “Hologram Ghosts,” are spreading. Hiro Amanokawa, a first-year junior high school student, activates a mysterious device left behind by his father, and encounters a Digimon called Gammamon.

The new paranormal phenomenon is spreading. It is said that if red scribbles appear somewhere on your body in a digital photo, that area will begin to act strange. The red scribbles then appear on Ruli’s photo.

Trick or treat! It’s Halloween and Ruli is getting ready with decorations. However, one by one, people begin to disappear. Hiro and the gang investigate.

A scientist who is a former colleague of Hiro’s mom drops by. She takes everyone to an insect exhibit at the mall, but they’re attacked by a highly intelligent Digimon who’s hungry for their brains…

A mysterious nightly procession of monsters has been causing accidents on the highway. Ruli asks the gang to join her at the go-kart track, when they’re met with unexpected danger. Will they be able to survive until morning?

One afternoon, Kiyoshiro Higashimitarai and his partner Jellymon meet a lost girl named Yuna at a department store. Yuna becomes fond of Kiyoshiro by strange coincidence, and he tries to take her to the lost child center.

There is a rumor about a Digimon appearing out of nowhere with a katana, attacking other Digimon and humans indiscriminately. Angoramon is taken over by the cursed katana and.

Ruli is asked to be a model for a wedding pamphlet and puts on a wedding dress. However, she is suddenly taken. It seems that brides in wedding dresses have been disappearing from local wedding halls.

Emma Hanes, a nosy friend from Kiyoshiro’s past, visits him. However, there is a strange phenomenon happening where people’s eyes first turn red, then their bodies become covered with numerous eyes.

People start receiving newsletters with articles of terrible events that haven’t happened and are shocked and terrified to find out that they all come true. It seems a Digimon is behind this…

Something has disrupted the digital money system, angering the envoy of the god of wealth. What has caused the disruption? Hiro and the gang are on the case.

Someone from the circus is luring children and turning them into cards. Ruli and Hiro sneak into the circus after Angoramon is kidnapped. It's up to Ruli, Hiro, and Gammamon to put a stop to this.