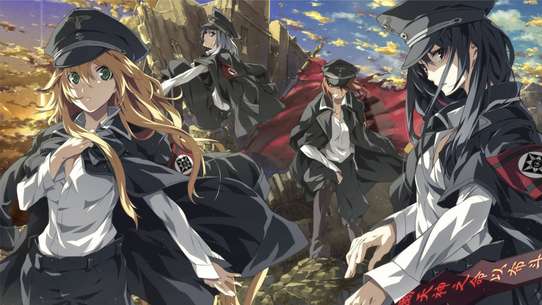 The BEST episodes of Dies Irae

Every episode of Dies Irae ever, ranked from best to worst by thousands of votes from fans of the show. The best episodes of Dies Irae!

On May 1, 1945 in Berlin, as the Red Army raises the Soviet flag over the Reichskanzlei, a group of Nazi officers conduct a ritual. For them, the slaughter in the city is nothing but the perfect ritual sacrifice in order to bring back the Order of the 13 Lances, a group of supermen whose coming would bring the world's destruction. Years later, no one knows if this group of officers succeeded, or whether they lived or died. Few know of their existence, and even those who knew began to pass away as the decades passed. Now in December in the present day in Suwahara City, Ren Fujii spends his days at the hospital. It has been two months since the incident that brought him to the hospital: a fight with his friend Shirou Yusa where they almost tried to kill each other. He tries to value what he has left to him, but every night he sees the same dream: a guillotine, murderers who hunt people, and the black clothed knights who pursue the murderers. He is desperate to return to his normal, everyday life, but even now he hears Shirou's words: "Everyone who remains in this city eventually loses their minds."

Eleonore is planning on opening the Fifth Swastika, but Lisa and Ren are there to potentially try to stop her. However, Kei is following Eleonore's orders, so that might not go as smoothly as everyone thinks.

Fujii battles the enemies on the bridge. He temporarily gains the upper hand, and then the terrifying Lord Heydrich appears.

Ren is captured by the Black Round Table. He learns who they are and what they want.

Shirou speaks with the mastermind behind the events in the city, who reveals that he was manipulated into being immortal and becoming "a toy of God."

Ren wakes up with a blonde girl in his bed! He and Kasumi adopt her and take her around the city, buying her clothes and taking her shopping. Then he has a meeting with his old friend Shiro.

The Black Round Table's next target is the hospital where Kasumi is kept. Will Ren be able to protect her?

The LDO puts its terrifying plan into place as they prepare to open the eight swastikas across the city. Can Ren and Shirou stop them?

The plans of the Black Round Table are revealed as one of their members teaches Ren how to use his powers. He's quickly given the chance to put his new strength to the test as another member kidnaps Kasumi!

Ren Fujii is discharged from the hospital, not waiting for his friend Kasumi to meet him. She catches up with him and makes him take her to a sword exhibition to confront his fear of knives.

Each night, Ren is tormented by dreams. When he wakes up, another headless corpse is found. Is he behind the murders, and if so, why?

#17 - The End of the Nightmare Is a Beginning

Ren confronts one of the group of new students about what they want. Ayane begins to show signs of supernatural abilities.