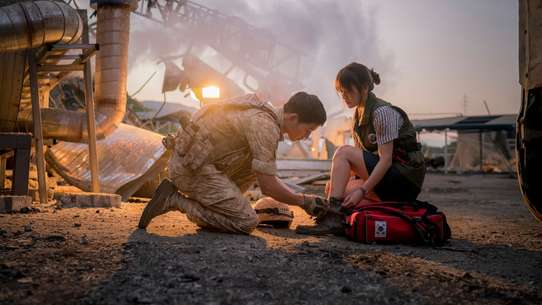 The BEST episodes of Descendants of the Sun

It's love at first sight for special forces Captain Yoo Shi-jin when he meets a beautiful doctor who treats his wounds. Over before it can truly begin, the two separate due to their opposite values -- one being a soldier who takes lives, and the other a doctor who fights to save them. Almost a year later, a fateful reunion takes place in Uruk, causing them to work together. Can Shi-jin and Mo-yeon overcome their biggest hurdle, or was it never meant to be?

In the rescue field, just one small action could become a life and death situation. With everything collapsed in ruins, Si Jin and Mo Yeon face a crisis during a rescue operation. Meanwhile, Dae Young shows his true feelings to Myeong Ju.

#2 - I Shouldn't Have Received His Apology

Mo Yeon finds out that Si Jin left the base overnight without saying goodbye and regrets what she said to him. Meanwhile Si Jin visits Dae Yeong at work and they go out for a drink. On the day of the medical team’s departure, something is about to happen in Urk.

After a year of thinking that Si Jin and Dae Yeong were dead, Mo Yeon and Myeong Ju live in grief while trying to move on with their lives at the same time. However, both Si Jin and Dae Yeong miraculously appears before them alive and well. Putting their eventful past behind them, the two couples enjoy their precious time together and draw a beautiful future together.

#4 - Comfort the Deceased with a Silent Prayer

After continuously carrying out rescue operations, the rescue team saves a remaining survivor and Si Jin announces the end to the search of missing personnels at Mowuru Power Plant. Meanwhile, with the plane ready for them to go back to Korea, the members of the medical team are asked to choose whether or not they wish to stay.

#5 - As of This Moment, Everyone Will Return to Team Alpha

As Si Jin disappears without stating his destination, Dae Yeong figures out that he must have left for a solo operation to save Mo Yeon. To back him up, Dae Yeong gathers soldiers and joins Si Jin on an unauthorised rescue mission.

#6 - You Got a Parcel from Shin Ji Young

After saving Argus, Mo Yeon and Si Jin return with Fatima and the sick kids from Haunted Village. The doctors treat them and give them medication. However, Fatima goes missing along with all the narcotic analgesics. Meanwhile, parcels arrive from Korea, and Si Jin and Dae Yeong face trouble as they receive a parcel from two flight attendants.

When Mo Yeon hears her will being broadcast through the speaker, she hurriedly runs back to turn it off. However, after hearing Mo Yeon’s true feelings for him, Si Jin constantly tries to get Mo Yeon to admit it on her own. Meanwhile, Gil Joon confronts Dae Yeong and Myeong Ju about their relationship and asks them if they still have feelings for each other.

Si Jin arrives at the hospital in a bloody mess, and efforts to resuscitate him seem to fail as his vital signs continue to wane. Meanwhile, with Ahn Jung Joon’s admittance, an unsettling mood descends down upon Haesung Hospital as political tension between North and South Korea simmers underneath.

Si Jin and Mo Yeon continue to enjoy their sweet relationship together. Meanwhile, Dae Yeong and Myeong Ju keep having conflicts. One day, Team Alpha is suddenly sent out for a mission abroad for three months.

Si Jin gets detained in the storage room for insubordination and Mo Yeon visits him. Meanwhile, on his way back to Korea, Dae Yeong runs into Myeong Ju who has just landed at the airport.

Due to the M3 virus, Dae Yeong and Myeong Ju become isolated. Also, Medicube turns into a designated facility to treat the troublesome virus. To fight the epidemic, both the doctors and soldiers do their best. However, the vehicle with all the vaccines and medicines is suddenly stolen.

The medical team returns to Korea and starts living their daily lives again. However, all of them feel a little empty as they miss their lives back in Urk. Meanwhile, as soon as she returns, Mo Yeon hands in a letter of resignation to the hospital director.

Si Jin and Dae Yeong catch a thief who is running away on a motorcycle. Si Jin and Mo Yeon meet for the first time in the hospital where the thief is admitted to.

Si Jin and Mo Yeon go to the town together. Si Jin takes Mo Yeon to the island by a boat and they have a serious talk. While they are on a short trip, Si Jin tells the love story about Dae Yeong and Myeong Ju.

#15 - We Bump into Each Other While Passing By

Si Jin and Mo Yeon go on a first date and something urgent happens to Si Jin. After Si Jin leaves her, Mo Yeon finds out that she did not get a professor position and feels devastated.

Si Jin spots gang members on the street and sends Mo Yeon away to the store. Si Jin is shocked when he discovers the identity of the boss in the gang. Meanwhile Mo Yeon borrows the car to return to the camp but gets into an accident.