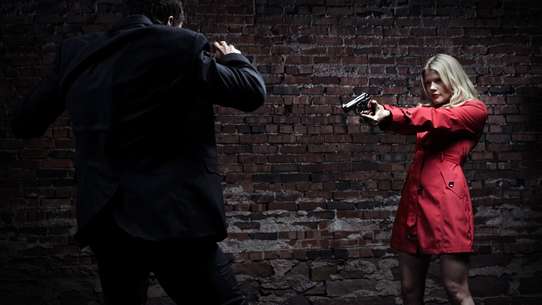 The BEST episodes of Deadly Women

Female murderers are often times more horrifying and intriguing than their male counterparts. Their worlds are often defined by obsession, greed, and revenge. Deadly Women fuses bone-chilling story-telling, sumptuous period drama and forensic fact in a bid to explore history's most alluring female killers. Each episode profiles four famous cases from the past; killers and their victims are brought to life by elaborate dramatized reconstructions. The program will span four centuries and seven countries to explore the makings of these deadly women. Candice DeLong, a former FBI agent and profiler, and Dr. Janis Amatuzio, a forensic pathologist will also join the program to give a deeper insight into the crimes and the women who commit them.

Women who murder for no particular reason.

When emotional changes start to become overwhelming the results can be bad.

These young women plans for revenge ended in murder.

Kirsten Costas reminds her classmate Bernadette Protti of everything she wants, but could never have. The solution to the problem was to annihilate the source of the pain by stabbing Kirsten to death. Karen Severson and Laura Doyle were friends with Missy Avila since grade school, but as they grow older, Missy blossoms into a beautiful, charming young lady while Karen becomes a single mother. Teenage angst trumps childhood friendship when Karen and Laura take Missy into the woods, beat her up, cut her hair and drown her in the lake. The crime is unsolved for years until an unexpected confession appears as if out of nowhere. Kelly Fuller (age 18) is enraged at 15-year-old Jessica Lang, who is her ex's new girlfriend. Jessica, who's more interested in her apprenticeship and family than any boy, pays for her friendliness with her life after Kelly decides to end the source of jealousy permanently by stabbing her almost 50 times.

In order to kill her father, Marjorie Diehl-Armstrong had to make enough money to hire a hit-man and decided to use a collar bomb as a weapon. Little did her accomplice know the bomb on his chest wasn't a decoy. Rosie Alfaro stabbed her friend's 9-year-old sister over 50 times to rob the house and trade the items and money stolen in exchange for drugs and booze. To inherit her kind neighbor's farm, Kim Snibson brutally murdered the couple and got two men to do the work for her.

Three women who fall prey to jealousy, driving them to dark and horrifying places on their minds.

A teacher's aide gives lessons in murder and a love triangle ends in murder.

Deadly Women examines cases where young women kill including Chelsea Richardson and Susanna Toledano who killed Chelsea's parents so she could inherit their money, "Sandra" and "Beth" who killed their mother for her alcoholism, and Penny Bjorkland who shot a man just to find out what it was like.

A wronged wife who murdered her ex-husband, a jealous girlfriend who took revenge on her rival, and a girl who killed her own father.

To the Master Manipulator we are all just the pawns in their game. Men, children, friends... anything is possible. For these women, they manipulate others to kill for them... but these girls didn't get away.

A mother who manipulated her son into committing murder, a woman who made a deadly request of her children, and a daughter who was used as a lure for a family business.

Susan Wright is supposedly abused and controlled by her husband, who spends days having affairs with strippers and using drugs while Susan raises their two young kids. Susan doesn't believe in divorce and feels the only way out is murder. Alice Mitchell has plans of moving to Boston with her lover Freda Ward and living as a married couple disguised as a man, but when Freda's family stops those plans dead in their tracks and forbids her to see Alice, an obsession begins leading Alice to destroy the one she cherished most. Larissa Schuster is many things - a biochemist,an over-achiever... and a bully. She carries on affairs behind her husband's back and when he leaves the family home – instead of continuing her affairs, she permanently dissolves their marriage by dissolving Tim's body in a blue barrel of acid in the garage.

Unsuspecting victims get too close to their enemies.

Examining crimes of passion, including an office affair that turned toxic and a lover who used the Internet as a murder weapon.

Greed is one of the oldest motives for murder, and these deadly women are no exception. They'll do anything to satisfy their need for cash. They stalk their victims throughout society - rich and poor. This is the dangerous world of Fortune Tellers.

Jealous of the attention given to her children, Darlie Routier stabbed two of her sons and staged a break in to get that attention back. Frances Newton cold-heartedly shot her husband and two young children for life insurance money. Susan Eubanks got revenge against her ex-husbands by shooting and killing her four sons in the order they came into her life, she currently awaits execution.

Three women have love stories with bloody and bleak endings all blinded by desire and malleable leading to relationships with dangerous men.

While their sisters chose a life of sensible, suburban motherhood, these Deadly Women chose a life of crime. Gangsters, thieves, drug-lords. They lived with the thrills, the danger, and the deadly consequences of being outlaws.

Christina Walters defies the odds by becoming a gang leader at age 20 and attempts to earn the Crips' tear tattoo under an eye meaning they've killed. As deadly initiation, Christina and her gang kidnap three women in two separate abductions and shoot them like lambs to the slaughter. The seemingly senseless murders would've remained unsolved if it weren't for one thing – one woman is still alive. Judith Neelley and her husband Alvin met and after marrying when she was 15, they begin a crime spree. After being released on armed robbery charges, Judith and Alvin commit the most heinous of crimes by abducting, raping, torturing and murdering two women, one of them a 13-year-old girl. One extraordinary breakthrough leads to an eyewitness confession and one detail ultimately leads to their arrest. Irene Maslin gladly plans to help kill her friend's on-again-off-again boyfriend by injecting him with battery acid. That doesn't work, so she orders a young man to bludgeon him with a baseball bat and when that didn't work, she finishes the job by placing a grocery bag over his head and suffocating him to death.

When these women meet their mate they gain a partner in crime and life.

Tiffany Cole kidnapped and buried alive an elderly couple who had helped care for her as her father was dying from terminal cancer. Seeking initiation into the notorious street gang, the Bloods, Shonda Walter butchered a Pearl Harbor survivor with an ax without mercy. And bipolar Sunday School teacher Melissa Huckaby drugged her young daughter's 8-year-old friend out of jealousy and raped her using a rolling pin.

Apart, a woman and a man can be innocent, safe to society. But when some couples unite, they spark a terrible urge for destruction. Happy couples become deadly teams, intent on one goal--murder.

The irresistible charm of a woman can blind a man to her deadly ways.