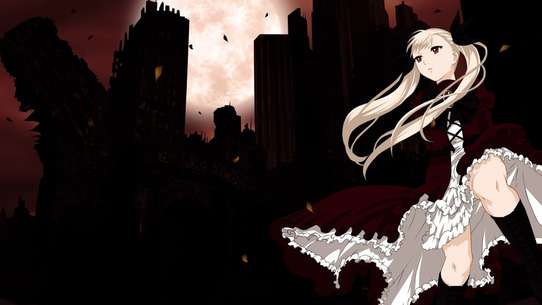 The BEST episodes of Dance in the Vampire Bund

Adaptation of Nozomu Tamaki’s suspense/action/horror manga serial Dance in the Vampire Bund. After millennia in hiding, Mina Tepes, the Princess of the ancient covenant and ruler of all vampires, wants change. Using the vast wealth of the Tepes line, she has paid off the entire gross national debt of Japan and in so doing, gained the authority to create a "special district" off the coast of Japan that is to become the future haven to vampires the world over! Now, on the eve of the landmark press conference announcing the existence of vampires to the world, terrorists and rival factions are plotting to assassinate Mina Tepes before she has a chance to make her world-changing announcement.

#1 - Dance in the Vampire Bund

Two beastly warriors shed blood in defense of identical princesses, and Mina learns the shocking secret behind the legacy of the true bloods! Mina then made a pledge to Akria to stay with him forever like Akria did as a young boy.

Akira is confronted by Meiren, and Akira begins doubting Mina. He finds out about Mina kidnapping the Prime Minister's grandson and confronts her about it and about the fact that vampires have infiltrated the school. She says that the vampire society rests on her shoulders and that she will do whatever necessary to make sure that the Vampire Bund plan is fulfilled. After hearing this, Akira teams up with some of the kids from school to eradicate the vampires inside the school.

It becomes known, by some students, that Nanami was attacked by vampires. Akira and Yuki are attacked by vampires wearing the same school uniform as them, and they are saved at the last moment by Meiren who takes on the band of vampires with ease. Mina sends Nella to kidnap the grandson of the Prime Minister when he refuses to accept Mina's plan.

Akira's curiosity about the concept of eternity leads him to ask Mina questions that are difficult to answer. Though it may sound promising, eternity is not without its harsh realities.

The Bund is finally enjoying some well-earned peace when chaos visits once more - the Three Clans have appeared in the Bund, putting Akira's life in grave peril.

Despite their differences, Mina and Akira must learn to work together in order to save some student council members from the rogue vampires who've taken them hostage.

Kaburagi Akira is a seemingly normal high school student at the time that Mina Tepes creates the Vampire Bund.

The day after saving Mina, Akira wakes up in bed with her and has regained some of his memories.

Killers-for-hire stalk Akira, and the werewolf's inability to transform puts his life in jeopardy. Meanwhile, Mina raises the stakes of her wager after a particularly unpleasant test of her purity.

With the establishment of the Vampire Bund, Mina Tepes is ready to hold a press conference, so many members of the press have come to the island.

On the surface, things appear to have calmed down at the academy, but among the students there are deep physical and psychological scars that have not yet healed.

On the live talk show Astraea no Tenbin, the topic of the day is the existence of vampires after a series of attacks that have left distinctive bite marks on the victims.