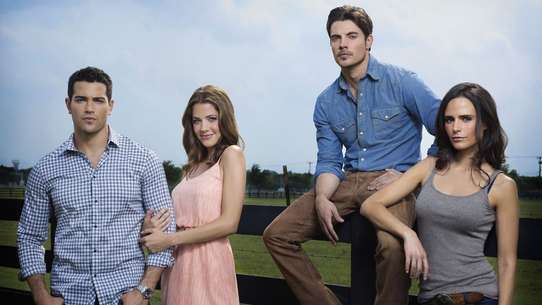 The next generation of the Ewing family - cousins John Ross Ewing and Christopher Ewing - clash over the family's oil business and vast fortune. Roll on drama, sabotage, secrets and betrayal. Everyone is back and then some!

Pamela's discovery that John Ross has been sleeping with Emma ignites a firestorm at Southfork threatening not only their relationship, but Bobby and Ann's. Christopher and Heather must deal with a drastic action taken by Bo; Elena and Nicolas' relationship is tested as Drew's arrival in Dallas continues to threaten their plans; and Emma takes a page out of her grandmother's playbook that ends in disaster.

In the electrifying second season finale, the Ewings unite to execute J.R.’s master plan. Twists and turns abound as each family member tries to ensure its success in ways that would make even a scoundrel like J.R. Ewing proud. When the shocking answer to the question “Who killed J.R.?” is finally revealed, the stage is deliciously set for new alliances and new battles to begin.

The mid-season premiere finds the Ewing family searching for answers as to who set the fire at Southfork Ranch and who will survive. While John Ross and Emma struggle with their role in Pamela's overdose, relationships among the family are forever changed.

On the heels of Bobby's appointment as Railroad Commissioner, John Ross scrambles to find the funds to keep the Arctic lease deal alive, even if it means betraying those who love him most. Sensing an opportunity, Elena and Nicolas get Pamela and John Ross out of the office to divide and conquer. Meanwhile, things get complicated for Christopher and Heather and Ryland's plot to keep Emma and John Ross apart takes an unexpected turn.

A cartel faces consequences, as some lives are saved and others are lost, in the Season 3 finale. Also: Bobby and Sue Ellen forge a newfound alliance; Elena grapples with a deep betrayal; and John Ross discovers a shocking secret about J.R.

When new evidence mysteriously surfaces pointing to foul play in Tommy's disappearance, Christopher aims to connect Pamela to the crime. J.R. and John Ross maneuver on two fronts to reclaim their birthright, including poisoning one family member against another. Pamela continues to push her father's agenda to gain control of Ewing Energies. As a new member of the family arrives at Southfork, Ann is pushed to the brink by Ryland's sadistic games and finally takes action.

It's wedding day at Southfork and Afton, Ray and Lucy return for the occasion. The only one missing is the groom, John Ross, who's skipped out to strike a deal with a family adversary. Meanwhile, Christopher returns from Mexico to witness Nicolas and Elena's relationship deepening, and to his surprise finds a new burgeoning romantic connection. As Pamela wonders what's keeping John Ross from the nuptials, Sue Ellen fears it's Emma and contemplates stopping the wedding.

When John Ross and Pamela make a shocking discovery about an enemy’s whereabouts the night J.R. was killed, Bobby is compelled to reveal more of J.R.’s master plan to them and ask for their help in a surprising way. Meanwhile, Christopher heads out to search for his mother, but as an unexpected secret comes to light, a rift drives Christopher and Elena apart. At the same time, Sue Ellen makes an impassioned plea to convince Ken Richards (Lee Majors) to do the right thing, even though it may have dire consequences for him.

After a lifetime of scheming and dealing, J.R. Ewing finally meets his end. Shocked to learn from the authorities that J.R.'s death is the result of a random mugging, they strive to set aside their differences and mourn together. Accompanied by many characters from J.R.'s past, the Ewings bury their own. In a heartrending goodbye episode, Dallas bids farewell to the legendary J.R. Ewing... Only to uncover powerful evidence that leads to a shocking revelation worthy of one of televisions most iconic characters. As in life -- and now in death -- nothing is ever as it seems when it comes to J.R. Ewing.

On the heels of Nicolas' arrival, John Ross goes to great lengths to keep his plans for Ewing Global moving forward, locking horns with Bobby in the process. Meanwhile, Sue Ellen's suspicions of John Ross' infidelity threaten to derail her alliance with her son. Harris Ryland's surprise return creates concern, and Emma enlists the help of her grandmother. Bobby and Ann's investigation into Ryland's release from jail leads to a shocking.

A conspiracy emerges intent on keeping Christopher to blame for recent events and to cripple Ewing Energies. The Ewings' investigation into this conspiracy brings revelations in line with J.R.'s masterpiece and introduces a new adversary into the mix. John Ross and Pamela bond as he helps her comes to terms with a personal issue just as Christopher and Elena's relationship takes a turn. Meanwhile, Ryland makes a move against Drew to protect Emma.

In the dramatic season finale, family bonds bring the Ewing’s together as a loved one faces a medical crisis. Christopher and Elena begin to learn that not everyone is who they appear to be, including the people closest to them. Long buried secrets are revealed as the past rears its ugly head.

With tension mounting between the newly married Christopher and Rebecca, family ties begin to unravel when the deed to Southfork is revealed. In order to thwart J.R.’s schemes, Ann seeks help from someone in her past, and Christopher decides it is time to fight dirty.

Having vanquished Cliff Barnes and taken over his company, the Ewings are united, with Sue Ellen planning a wedding for John Ross and Pamela. But solidarity among them can only last for so long. John Ross quickly gets into conflict with Bobby over their joint ownership of Southfork Ranch, while also putting his marriage at risk as he enters into an illicit liaison with Emma. Meanwhile, Christopher’s relationship with Elena seems irreparable as Elena returns to Dallas with her own secret agenda for justice. As the betrayals mount, the arrival of a mysterious stranger puts everyone’s plans at risk.

After Pamela proves her loyalty to John Ross, he goes out on a limb to let her in on J.R.’s master plan. But when Christopher’s suspicions about her seem to be right, John Ross begins to question if his trust was misplaced, leading Pamela to show her mettle in game-changing fashion. Meanwhile, Drew confides in Elena about a dark secret that leaves her forced to choose between her family and her love for Christopher. And Bobby continues his fight to keep Ewing Energies out of Cliff Barnes’ hands.

With the future of Ewing Energies in jeopardy, Christopher does everything possible to keep a key deal alive. J.R. works to undermine Pamela, forcing John Ross to choose between a Ewing and a Barnes. Cliff Barnes returns to meet with an unlikely visitor.

In the aftermath of John Ross and Sue Ellen’s coup to take over Ewing Energies, Bobby retaliates with his brother’s help, Gary (Ted Shackelford), leaving the family in a Mexican standoff. Meanwhile, Pamela is caught between Christopher and John Ross, as the cousins clash, with it all culminating in a winner-take-all car race.

The honeymoon is over for John Ross, as Bobby and Sue Ellen try to use the Governor to stop John Ross from becoming just like his father, J.R.... a move that could divide the family forever. Meanwhile, Christopher discovers surprising details about Heather's past; Cliff persuades Elena to try a new tact in her quest for justice; and Judith, Ryland and Ann try, with varying degrees of success, to get Emma under control.

John Ross learns the value of family when he must choose between blood and oil. Sue Ellen and Rebecca both find themselves victims of men who could destroy their lives. And the Ewing’s must once again rally around one another when a medical crisis strikes.

With Christopher and Bobby at the helm of Ewing Energies, and Elena working to gain a stronger foothold within the company, J.R. and John Ross strike a deal to wrestle control of Ewing Energies away from them. Meanwhile, Pamela Rebecca Barnes schemes with John Ross to take half of Christopher's shares in Ewing Energies to fulfill her father's desire for revenge against the Ewings. And Ryland's mother, Judith, (Judith Light) proves to be just as evil as her son.

The race to secure capital for the impending Arctic Lease auction has Bobby scrambling to outmaneuver John Ross' efforts to frack on Southfork. While Nicolas and Elena's partnership heats up, Christopher makes a startling discovery about Nicolas' past, and Emma's games put John Ross and Pamela's upcoming wedding in jeopardy.

Ryland continues his onslaught of Ann, exposing secrets from her past that threaten to destroy her. Meanwhile, John Ross' plot to take over Ewing Energies solidifies; Christopher changes tactics with Pamela Barnes; and an enemy from the Ewings' past resurfaces.

With the clock ticking in the wake of Cliff and Ryland putting Ewing Energies on the verge of collapse, the Ewings battle back with J.R.'s masterpiece to guide them. Christopher and John Ross attempt to bring Pamela into the fold by turning her against her father, but at the risk of alienating her completely. Meanwhile, Bobby is on the brink of exposing Ryland's crimes as Emma and Drew's relationship continues to fracture, and Christopher closes in on finding his mother.

Rebecca reveals a life-changing secret to Elena. Still riling from his interaction with Bobby, Ann’s ex-husband demands an apology. Meanwhile, John Ross is under pressure from his allies and tries to turn one family member against another. And a family associate is murdered, leaving everyone to wonder about the culprit.

John Ross is bothered by the weight of having to do his father's dirty work and decides to move into Southfork. Strife continues to grow between Ann and Bobby when it is revealed she went to her ex for help with a family problem. Rebecca approaches Bobby and Christopher with information that she believes might help save the ranch.