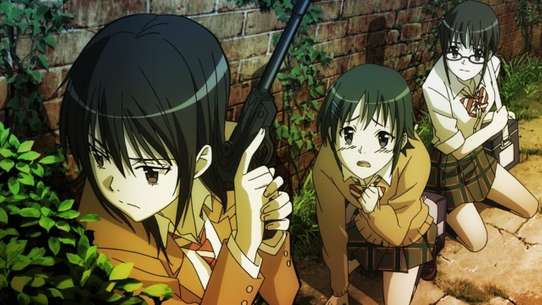 The BEST episodes of Coppelion

Every episode of Coppelion ever, ranked from best to worst by thousands of votes from fans of the show. The best episodes of Coppelion!

In 2016, a meltdown of a nuclear power plant contaminates Tokyo, forcing the government to order its citizens to evacuate. 20 years later, Tokyo has become a ghost town due to the high levels of radiation which the government has banned entry for anyone. When a distress signal is received from the area, the Japan Ground Self-Defense Force dispatches three girls from the special unit Coppelion to search the ruined capital for survivors.

Ibara and the other passengers rejoice after their train has successfully escaped from the Zone. But their celebration is cut short when they see a vengeful Kanon chasing after them in the Iron Spider, which they thought had been destroyed.

Ibara and the Diversion Team are nervously waiting for the train to arrive when they are attacked yet again by the Ozu Sisters. After a fierce battle, Ibara manages to fend off the sisters and make it on board the train.

Haruto informs the group that a massive and lethal Zone is approaching the Planet. With time running out, Ibara comes up with a last-ditch plan to evacuate everyone from the area using an old abandoned train.

The Diversion Team find themselves in serious trouble when the 1st Division brings out their secret weapon, the Iron Spider. As Ibara tries to hold off the Ozu Sisters, Aoi is left with the task of stopping the Iron Spider alone…

The Coppelion set their escape plan into motion by dividing into two teams, with the Diversion Team led by Ibara, who is tasked with drawing the Ozu Sisters’ attention away from the others.

Ibara is critically injured after getting caught in a blast caused by the 1st Division’s tank. Thanks to the efforts of Haruto and Taeko, Ibara manages to pull through, only to learn that a guilt-ridden Aoi has now secluded herself.

While heading to the hospital, Ibara and her team run into Cleanup Crew members Kanon and Shion Ozu, otherwise known as the Ozu Sisters. But to Ibara’s surprise, the Ozu Sisters turn against their former classmate…

Aoi’s careless action results in her being captured by the 1st Division. Realizing that the enemy is actually after the Coppelion and not the survivors, Ibara tries to rescue Aoi, only to be knocked unconscious by one of the men.

While heading to their next destination, the girls encounter a father and his pregnant daughter being attacked by a group of armed men.

Vice Principal Mishima learns from the rescued Tanizaki about a man known as the Delivery Man believed to be their leader. Meanwhile, the girls follow a lead that unexpectedly takes them to the Delivery Man himself.

In the not-so-distant future, a catastrophic event has turned the old capital of Japan into a wasteland, forever changing the lives of its people. Decades later, three schoolgirls set foot into the now forsaken city.

The Coppelion succeed in bringing down the monster crow, which then crash-lands in one of the Zones. When the girls arrive at the site, they discover that a company named YELLOW CAKE is responsible for dumping high-level waste into the Old Capital.

The girls encounter a man searching for his missing child. Hearing that the child may have wandered into a dangerous area, the girls rush to find the child before it’s too late.