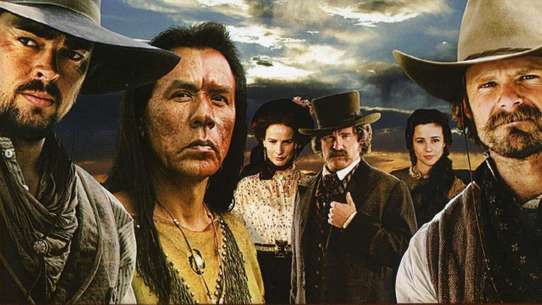 The BEST episodes of Comanche Moon

Comanche Moon, the prequel to McMurtry's bestselling and Pulitzer Prize-winning book, "Lonesome Dove follows Texas Rangers Augustus "Gus" McCrae (Zahn) and Woodrow F. Call (Urban), now in their middle years, as they continue to deal with the ever-increasing tensions of adult life--Gus with his great love, Clara Forsythe (Cardellini), and Call with Maggie Tilton (Banks), the young prostitute who loves him and bears him his son, Newt (Joseph Castanon). Kilmer plays Captain Inish Scull, a Yankee aristocrat and hero of the recently concluded Mexican War. Griffiths plays Inez Scull, the Captain's sexy wife who doesn't hesitate to fill her time with other men when he's away from home. Wes Studi plays Comanche Chief Buffalo Hump.

Gus and Woodrow are ordered by the governor to rescue Capt. Scull from a Mexican bandit who is holding him for ransom; Comanches raid Austin and burn much of it to the ground; Woodrow worries that Maggie's baby doesn't belong to him; and Gus becomes convinced that Clara is going to marry another man.

Seven years later, Gus grieves for his late wife and Woodrow gets jealous over the amount of time Jake is spending with Maggie, but Woodrow refuses to accept Newt as his own son; Blue Duck confronts his dying father; Clara visits Gus in Austin; and Scull is approached in Boston to lead an expansion of the West.

In Part 1 of 3, the Rangers track a notorious horse thief, and Gus and Woodrow are promoted to captains after their leader, Capt. Scull (Val Kilmer), abandons his men to search for his beloved horse that is stolen. Also: Gus courts Clara, a local Austin beauty, and Scull's wife takes up with Jake Spoon, a young Ranger.