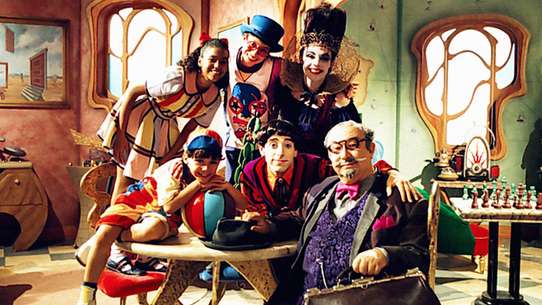 The BEST episodes of Castelo Rá-Tim-Bum

Nino is a 300-year-old boy who lives with his uncle, Dr. Victor, a sorcerer and scientist, and his great-aunt Morgana, a 6,000-year-old witch. The three of them live in a castle in the middle of the city of São Paulo. Apprentice sorcerer, Nino has never attended a school, because of the unusual age of 300 years. His parents left him living with Victor and Morgan, because they needed to travel on an expedition into outer space, taking their two younger brothers. In spite of having animal and supernatural friends in the Castle, Nino, feeling lack of friends like him, decides to do a spell he learned with his Uncle Victor, and ended up bringing to the Castle, three children who had just left school. Free of loneliness, Nino receives the visit of the three daily.

Nino doesn't want to be a child anymore and becomes an adult.

Three kids: Pedro, Biba e Zeca, meet Nino, the 300 years old boy and his family, Dr. Victor and Morgana, alongside with the tenants of a magic castle.

Everyone gets to meet Penelope, a young reporter. Nino, Penelope's declared fan, is amazed by the girl's presence and pretends to be Dr. Victor in order to impress her. Pedro pretends to be Zequinha, Biba pretends to be Morgana and everyone changes their part, trying to help Nino keep his game up. This creates a huge mess, that is only resolved by the real Dr. Victor, in the end.

Everyone gets to meet Caipora, a character in Brazilian Folklore that appears whenever someone whistle.

An Alien appears at the castle and it’s arrival scares everybody, after meeting Nino and the others the Alien reads an entire dictionary and learns how to speak Portuguese! Later, we find out that the Alien is Doctor Victor’s old friend that came to the castle to visit him, as no one is able to understand the Alien’s real name Zeca gives him an easier one... Etevaldo.

Zequinha takes off his shoes to play but ends up losing them.

#19 - The Spell Turned Against the Sorcerer