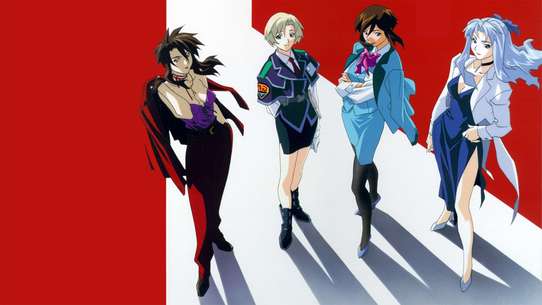 In the 2030's, an earthquake hit Tokyo, killing millions and devastating the city. In order to speed up the rebuilding after this castrophe, the powerful Genom corporation mass produced boomers: smart robots that can be designed and programmed to take on almost any task. Seven years later some of the boomers have started going rogue, mutating horribly and destroying everything in their path. Tokyo must rely on the services of the vigilante group of women known as the Knight Sabers.

When a rogue boomer takes over a factory and starts absorbing all the machinery there, the Knight Sabers must spring into action despite the overwhelming AD Police presence. What the team doesn't realise is that the entire situation has been manufactured by Genom, who are looking to capture the Knight Sabers. Will Linna, Priss and Nene fall into Genom's trap?

Something dangerous is lurking in Sylia's father's old lab, and Sylia becomes to determined to locate the lab (buried underground since the earthquake) and destroy it. Meanwhile, Nene uncovers some dark secrets when she begins investigating some inconsistencies in Sylia and Macky's past.

Galatea steps things up a notch when she takes control of the Dragon Line and uses it to awaken a new wave of giant boomers. In order to fight back, the Knight Sabers must learn the intricacies of their new hardsuits, but can even this new technology hope to make a dent in Galatea's all-pervading army of boomers?

With Linna and Nene adrift in space and on a collision course towards Earth, it's up to Priss to face Galatea by herself. But when Galatea sets her sights on absorbing not only the hardsuit, but also Priss herself, it seems as if the battle is already lost. Can the Knight Sabers pull through and emerge victorious from this final showdown, or has Galatea already won?

Reaching the space umbrella, the Knight sabers are horrified to discover that Galatea is already there waiting for them! The battle turns into a desperate race against time, for in fifteen minutes, the sun will hit the umbrella's solar collectors, supplying Galatea with the energy she needs to spread the rogue boomer phenomenon to the entire world! But can Linna, Priss and Nene really hope to go against an adversary so powerful that she can take control of everything around them- including their hardsuits?

Angered by Sylia's refusal to explain the dark secrets of her past, Nene refuses to take part in the Knight Saber's next mission, leaving Priss and Linna to search for Dr Stingray's Wiz Lab alone. But once they find it, will Sylia have time to destroy whatever horror lies within before Mason tracks her down and takes it for himself?

Whilst Nigel begins work on a hardsuit for the Knight Sabers' newest member, Linna wrestles with her doubts as she tries to decide whether joining the team is what she really wants.

The mysterious rock singer and Knight Saber Priss leads Linna to the Knight Saber's headquarters, where Linna must prove she is up to becoming one of them by taking part in a simulation of a rogue boomer attack. Can Linna prove that she has what it takes?

Stuck in the factory, Linna, Priss and Nene are low on power and out of options, leaving it up to Sylia to don her hardsuit and save them from the ADP. Meanwhile, a surprise reunion is in the works when Sylia's younger brother Macky comes to live with her.

Whilst Mason takes control of the mysterious and powerful Galatea, the true story behind Sylia and Mackey's past begins to be revealed. Can the bond between Linna, Priss, Nene and Sylia possibly endure the loss of their hardsuits and the myriad dark secrets that are about to be revealed? Or will the Knight Sabers simply fall apart?

When a remote controlled boomer working on n undersea project suddenly takes off and starts heading for Tokyo, AD Police officers Leon and Daley decide to investigate just who or what could be motivating it. Meanwhile, Sylia begins conducting her own investigation, but will she be able to do anything about the boomer when the hardsuits are still undergoing repairs?

The streets of Tokyo become ever more deserted as people flee in the wake of the spreading rogue boomer phenomenon- but according to the national news, nothing is wrong! In the face of Genom's control of the media, Leon, Daley and Nene begin sending out their own broadcast in the hope of explaining the truth to the public and gathering together the remnants of the ADP for an all out attack on Genom's Dragon Lineâ€¦

The ADP and the Knight Sabers have come to the rescue of Nene and the others still trapped in the ADP Totem Pole. But with the invading boomers fusing into the very structure of the building itself, it's going to take co-operation, strategy and a hell of a lot of luck to get everyone out aliveâ€¦

From the heights of Genom Tower, Galatea has reached out through the Dragon Line and made Tokyo her own. But when Galatea goes one step further and starts absorbing Macky's mind as well, the Knight Sabers know they can wait no longer. Donning their hardsuits, Sylia, Priss, Linna and Nene must penetrate the tower itself and force a showdown with Galatea herself if they are to save the city and the people they love.

As the Knight Sabers set about escaping from the boomer invasion of the Silky Doll, they come to realise that Galatea has used the Dragon Line to absorb the whole city, creating a boomer ecosystem. Desperately needing a respite, they head to the one place that the Dragon Line doesn't reach- a park by the sea. But they aren't the only ones to take refuge thereâ€¦

The ADP ""Totem Pole"" HQ is swarming with rogue boomers under Galatea's control, with only Nene and three other officers left inside. Trapped behind a security and communications lockdown, Nene and the others must defend themselves and search for a way to contact their friends and allies in the outside world before it is too late.

Linna's job begins to dominate her life, with all the overtime she does starting to cut into her efficiency has a Knight Saber. Filled with doubts as to whether the Knight Sabers and Tokyo really need her, Linna decides to return home, maybe for good.

A boomer-eating monster is stalking underground Tokyo- but the AD Police have been told not to go after it. Determined to do their job, Leon and Daley decide to track the beast down anyway. Meanwhile the Knight Sabers are also on the trail of the creature, and Nene for one can't afford to mess up this battle, or she will be out of the Knight Sabers- for good.

When reports come in of boomers disappearing around the 28th Ward, Sylia begins an investigation, sure that there must be something strange going on. But she is not the only one who is interested in the disappearances- Genom Executive Officer Brian Mason is also looking into the case. Can the Knight Sabers solve the mystery first?

With Nene stuck at work and Linna out of town, Priss is left to deal with a rogue boomer on her own- not easy when you're running low on power. Meanwhile, Linna realises she must decide what is most important to her before she can make a decision about which path her future shouls take.

Drawn to see Sylia by Galatea's powers, Linna, Priss and Nene discover the truth about the origins of the Knight Sabers and their hardsuits. Meanwhile, the AD Police face being disbanded, and Mason begins stirring up trouble as he tries to find ways to occupy Galatea.

As the giant boomer tries to fuse with Linna, Nene and Sylia, the Knight Sabers pin their last hope on Priss and her new Moto Slave. But even if Priss can take down this boomer, it's for certain that Galatea will continue to spread her control throughout all of Tokyoâ€¦

When Priss is trapped in a cafe with a rogue boomer that is too much for the AD Police to handle, it falls to Linna and Nene to tackle the monster. But with both Linna and her hardsuit untested in battle, can the Knight Sabers hope to emerge victorious in this engagement?

In the 2030's, an earthquake destroyed most of Tokyo. The Genom corporation decided to speed up rebuilding by using boomers, smart robots that come in all shapes and sizes. But even though the public never hears about it, boomers have a tendency to go rogue, causing great damage in the process. Linna Yamazaki has ostensibly come to Tokyo to start a new job, but her true motivation is to get in contact with the Knight Sabers, a vigilante group committed to destroying rogue boomers. Linna believes she has what it takes to become a Knight Saber herself, but will the existing members of the group feel the same way?

Ever wanted to get to know Priss better? Her friends and acquaintances certainly do, but with Priss' tendency to say more when she's singing than at any other time, it isn't easy to get close to her. But as we follow a day in the life of Priss Asagiri (rogue boomer and all), it's time to be reminded of that important lesson- actions speak louder than words...