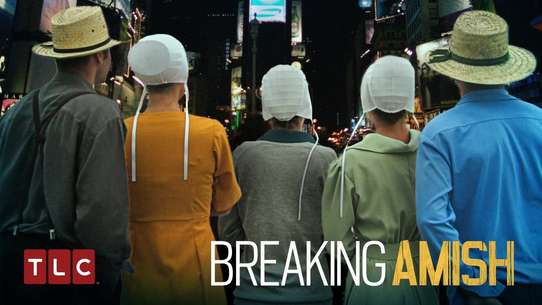 The BEST episodes of Breaking Amish

In a world where "plain" is considered a compliment, TLC will pull back the curtains to reveal the strict traditions of the Amish/Mennonite religion and lifestyle as cameras follow five people who have chosen to leave it behind and explore the world outside of their community. Breaking Amish, premiering Sunday, Sept. 9 at 10|9c, provides a never-before-seen look inside the lives of young men and women as they, for the first time, trade horse and buggy with taxi cabs to break out from their respective Amish/Mennonite communities in their pursuit to chase big dreams in the Big Apple. The groundbreaking series features nine hour-long episodes. Breaking Amish will shed light on many firsts for the cast members. From flying in a plane and wearing jeans, to using a cell phone and electricity, the show will highlight their transition into city culture and the basic amenities that come with it. Unlike Rumspringa, these young men and women get serious about the possibility of committing to careers, lives and options for living indefinitely on the outside. But after these new experiences and the opportunity to live out dreams take flight, will they take advantage of New York and carry out their newfound lives while leaving behind the Amish/Mennonite community and their families forever? The decision to pack up their bags and leave town does not come without a hefty price. Breaking Amish will unveil the disenchantment of family members who are forced to shun their own children, siblings and grandchildren as they decide to explore a world beyond the limitations of their simple upbringing. Should these "rebellious" Amish/Mennonite members decide to forgo Western luxuries and return to their previous lifestyles, they risk the probability of being shunned by their community altogether -- including the family, friends and life they once knew so well.

Sabrina uncovers her late birth mother's letters. Kate begins to accept the reality of her situation. Abe and Rebecca plan their eventual wedding. Jeremiah and Sabrina plan bachelor and bachelorette parties respectively for the engaged.

#2 - What Have We Gotten Ourselves Into?

Romance may be in the offing as the newcomers adjust to life in New York City, but their fresh start also comes with an air of tension.

#3 - Breaking All the Rules

The cast breaks Amish & Mennonite rules by buying "English" clothes and getting tattoos. The cast grows more comfortable in the city when they get wardrobe makeovers and tattoos, and Kate and Rebecca mull modeling careers, but surprise visits by Abe's and Rebecca's families could put an end to this experiment. Also, Jeremiah has his first driving lesson.

Miriam, Vonda, Barbie, Bates and Matthias—mulling a move to Brooklyn, where they will have to adjust to life in the city and wonder if they'll leave their rural communities forever.

Kate finds she is ousted from the others. Sabrina learns the whereabouts of her biological father, though she and Jeremiah keep a secret from the rest. Rebecca reveals a part of her past that she is not really in the mood to discuss. The cast makes a tough decision while packing their bags

A surprise modeling gig in Miami offers Kate an escape from the others, or so she thinks. Katie Ann has a surprise of her own in store for Mary and a big decision about her future. Jeremiah discovers footage of Kate that leaves everyone in shock.

The premiere of a reality series following five men and women from Amish and Mennonite communities as they seek the possibility of leaving their old lives behind for new ones in New York City, though they also run the risk of saying good-bye to their family and friends forever.

Kate, Sabrina, Abe and Rebecca visit the Sex Museum; Kate is in a bikini for her first photo shoot; Abe wants to take it to the next level with Rebecca; allegations of witchcraft.

The cast has great expectations when they finally make it down to Florida, but there's trouble in paradise.Jeremiah's surprise visitor has an ulterior motive for showing up, and Kate comes to Sabrina's rescue when she gets caught in the middle

Sabrina gets a call from a private investigator with surprising new information about her biological family. Abe chases his dream of becoming a professional bull rider and Jeremiah faces the consequences of his illicit affair.

The men and women go home to decide whether they will return to their communities or leave them behind for a new life, which may mean saying good-bye to their families and friends forever.

Abe, Jeremiah, Rebecca, Sabrina, and Kate have all had a difficult time adjusting to their new lives since leaving the Amish and Mennonite communities. Jeremiah hatches a plan to get the gang back together and give them all a chance at redemption.

#16 - What Is Really Happening

The cast disagrees about the good and bad of being Amish; Sabrina wants to connect to the Puerto Rican culture; Kate's DUI past starts to catch up to her.

The group reunites for the first time since leaving New York, but they are not prepared for life on the road in close quarters. Meanwhile, when the Bishop shows up unannounced back in Punxy, Abe's mother Mary is faced with the most difficult decision of her life.

During a reunion special, the cast addresses the rumors and allegations that have surfaced.

Sparks fly when Katie Ann decides to get an "English" makeover and picks Kate over Abe and Rebecca to go with her. Sabrina tries to find her long lost family, and herself, in Puerto Rico with Jeremiah along for the ride. Abe finally goes bull riding.

In the season finale Jeremiah comes back from Puerto Rico with a heavy heart and Sabrina makes a surprising decision about her future. An unexpected visitor from home shows up to check on Mary and Katie Ann. And the group finally make decisions about what's next.