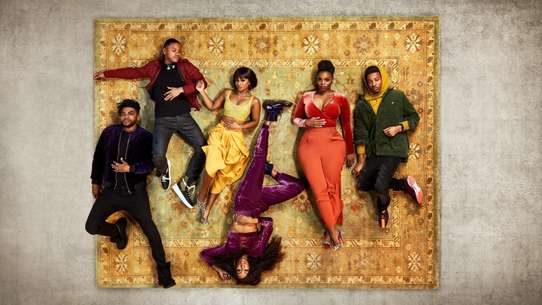 The BEST episodes of Boomerang (2019)

Set 25 years after the end of the 1992 movie of the same name, Bryson, Jacqueline Boyer's son and Simone, Marcus and Angela Graham's daughter seek their forge their own paths in this comedy created by Ben Cory Jones and Lena Waithe.

As the gang celebrates Ari's birthday, Simone finds herself conflicted when Camden resurfaces, throwing her relationship with Bryson in jeopardy.

Bryson tries to sell Victoria on marketing an avant-garde black film; Simone looks for opportunities for Tia to build her brand; Bryson reclaims his power from Simone.

Simone and Bryson grapple with the fact that they may be related; against Bryson's better judgment, Ari takes a spin at directing Tia's music video at the Atlanta Black Pride Festival despite his lack of experience and confidence.

Simone, Crystal and Tia embark on a late-night trip to rescue Simone's carefree god-sister and her boyfriend from jail; Simone deals with her guilt over Crystal and David's divorce.

Bryson hosts a game night, while David and Crystal meet for the first time since their divorce.

Homecoming at Nelson College has the crew nostalgic.

Ari invites the gang to a party he's hosting at one of Atlanta's hottest night clubs; at the club, Simone tries to get the DJ to play Tia's new single; Bryson and Simone kiss for the first time.

The MeToo movement strikes home when allegations surface against Marcus Graham, closing the Graham Agency for good; the squad members comfort Simone and each other.

Bryson and Ari help David get his house in order, literally and figuratively, after going against his no-sex rule with Elaine; Ari and Bryson resolve their beef but David acknowledges he needs some time away from his friend.

Marketing professionals Bryson Broyer and Simone Graham look for ways to create their own paths to success while trying to renovate the legacy of their parents: The Graham Agency.

From childhood to college, Bryson and Simone compete for each other's affections; Ari, Tia, Crystal, and David all make bold moves.