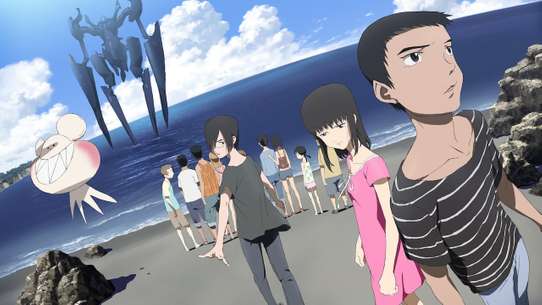 The BEST episodes of Bokurano

Every episode of Bokurano ever, ranked from best to worst by thousands of votes from fans of the show. The best episodes of Bokurano!

In a summer vacation, a group of 15 children discovered a mysterious man living in a seashore cave, along with his high-tech gadgets. The man claims to be a game developer creating a video game with 15 giant robots defending Earth from alien invaders and asks the children to test the game for him. The kids agreed happily at first, but soon they began to find the game horrifying, not only because of its realism but also for the first fatality among them happened right after their first victory. Worse yet, they had no idea how to stop or leave the "game."

During Maki's fight, the children discover the true nature of the enemies they are battling, and what really is at stake on every single bout.

Given another chance, Kirie finally decides to face the enemy, but when he surprisingly unveils Machi's identity, a commotion is created among the rest of the group.

Selected to fight the fifth enemy, Daiichi "Daichi" Yamura's final wish is to spend his remaining time happily with his siblings, but his plans are ruined when the battle starts sooner than he expected.

Jun declines Seki's offer and becomes the pilot for the final round. During the long battle, he reminisces about his fallen comrades while struggling to save the Earth once and for all.

Maki Ano is in awe as her foster mother is about to have a baby. She hopes to at least witness her little brother's birth, but when she is appointed the pilot for the eighth round, she is left with little hope to be able to do so.

Machi reveals to the remaining pilots all she knows about the battles, and how she and her brother got themselves involved on them.

Tamotsu reveals to Jun Ushiro who his real parents were and tells him their story.

After Komoda was selected for the eleventh match, her father resigns from his position as a politician, but not before revealing the truth about Zearth and the children to the world.

While Kanji fights the Twelfth enemy, the real objective of the masterminds is revealed. Later, Jun receives a proposal from Dung Beetle that may save his life if he accepts.

The human armies decide to intervene during the thirteenth battle, while Machi betrays Dung Beetle and becomes the next pilot in Kana's place.

Nagi, a childhood friend of Kunihiko Moji's needs a heart transplant, but so far the only compatible donor found is Moji himself. While dealing with Nagi's drama, he is selected to fight the seventh enemy.

Chosen to the tenth round, Aiko Tokosumi's life is turned upside down when a scandal involving her father brings up turmoil to her household. But she ends up finding in Kanji the strength to carry on with her duty.

Kodama fights the third enemy without caring about his surroundings, causing many casualties in the process, until he discovers the meaning of losing someone important to him.

The ninth round begins, but after witnessing his mother's miserable life, Kirie refuses to fight. Just when his companions are about to lose hope, something that nobody expected happens.

Bullied by her classmates because of her mother's questionable occupation, Mako "Nakama" Nakarai, after being chosen to engage into the sixth round, resorts to extremes to arrange money enough to complete a personal project of hers in time.

Takami "Komo" Komoda reveals the truth to her father, and while Waku's funeral is being held, Masaru "Kodama" Kodaka is selected to be the third pilot.

Yosuke Kirie wonders if he will find the resolve to fight in the next battle. While Mitsumi starts to look for means to protect the remaining children, Masamitsu discovers her secret.

The children try to find Kako without success, until Chizuru "Chizu" Honda discovers where he is hiding and tries to cheer him up. However, Kako has other plans for her.

The children start having second thoughts about the game, but a floating being known as Dung Beetle appears and teleports them to the cockpit of the mecha, which the group later dubs Zearth. On the evening of the same day, a new enemy appears, and Takeshi Waku is chosen to fight it.

Jun takes Kana to her father's house, having Machi traveling with them. On the way, he reminisces about his infancy days, and later, he asks Machi's help to protect Kana from Dung Beetle's intentions.

After the children discover the fate that awaits them, they are assembled and interrogated by the military, except for Isao Kako, who coincidentally is the next chosen pilot.

The fourth battle begins, but Chizu is more worried about taking revenge on her teacher than facing her enemy.

Fifteen children at a summer school program encounter the mysterious Kokopelli and agree to be testers for a game he claims to have completed recently. Soon, they are summoned into the cockpit of a giant mecha, with Kokopelli piloting. Thus the first round takes place.

The story of Chizu's relationship with her teacher is revealed, before she is selected to replace the deceased Kako.