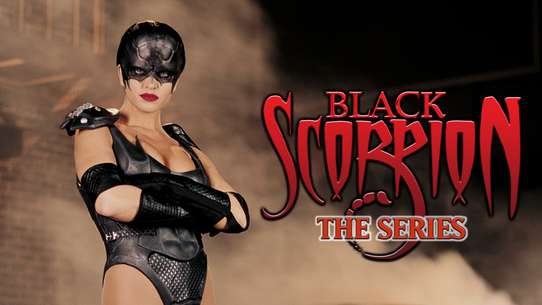 The BEST episodes of Black Scorpion

Black Scorpion is a female superhero in the vein of Spider-Man, Superman and Batman. She is beautiful, sexy and highly intelligent, and she has great martial-arts skills and a rapier wit. By day, Black Scorpion is Darcy, a policewoman, driving a white Corvette. By night, she becomes Black Scorpion and her Corvette morphs into the Scorpionmobile, a super-charged futuristic car equipped with an arsenal of science-fiction devices. Like her male comic-book counterparts, Black Scorpion's drive to assume another identity to confront evil and bring criminals to justice is fuelled by a strong personal motivation: the murder of her policeman father by a notorious supervillain, the Breathtaker. Unable to obtain justice through "the system," she assumes an alter ego to take the law into her own hands. Black Scorpion uses her crime-solving skills, her martial-arts prowess, and her Scorpionmobile to pursue and fight the supervillains and supervixens who threaten the City of Angels, a comi

A photojournalist is obsessed with capturing the Black Scorpion's identity on film. He sets her up to be exposed however the Black Scorpion blinds him to cover up her tracks. Now he wants revenge. Renaming himself Flashpoint and plotting to blind the city of angels.

Vox Populi, the lead singer of the world's worst band, finds the only way she can sell records is through subliminal recordings that make her young fans (including Darcy's pal, Tender Lovin') turn violent.

Ridiculed because none of his predictions come true, Professor Prophet, a washed-up psychic, fulfills his own prophecy that the City of Angels will be destroyed by earth, fire, wind and water. He forces Breathtaker, AfterShock, Inferno and Hurricane to carry out his plan, which also predicts the demise of Black Scorpion.

Unable to defeat the combined might of four supervillains, Darcy questions her vocation as a superhero. When Dr. Phoenix resurrects her father, Lieutenant Walker, Darcy is inspired to remain true to her calling. Once again, Darcy becomes Black Scorpion, and this time father and daughter battle the four supervillains together.

When the mayor orders all the homeless people to be taken off the streets, the people join forces with one of Black Scorpion's long lost enemies. AfterShock, a former seismologist who has discovered how to create earthquakes, joins forces with the homeless in an attempt to take over the City of Angels.

A marine biologist is studying the ocean filled with toxic waste dumped by the mayor's henchmen. When she comes in contact with the poison she seeks revenge, renaming herself Hurricane and plotting to flood the city of angels.

When Susie Payne was young, she was in a terrible car accident that cost her both of her legs. Her doctor said that she would never walk again, but the miracles of science helped her. Now she is out for revenge and determined to prove that women aren't the weaker sex.

Eugene Gardner is a florist with a dark side. He is obsessed with getting the mayor's secretary, Babbette, whom he has loved since childhood, for himself. Going by the nickname of Greenthumb, he plots to use a deadly gas to threaten the city.

Medusa, the owner of a ritzy mineral spa, abducts the city's most eligible bachelors, including Darcy's partner, Steve. When Medusa starts turning them into statues, only Black Scorpion can save them. When Minerva Stone was young she had one fear: being rejected by boys. What she didn't know was that they were afraid of being rejected by her. One Halloween night some boys sprayed her with some water but it turned out to be acid. Now she hides out in a Heath Spa with some magical water that allows her to hide her ugly face, renaming herself Medusa and planning to seek revenge on all the men who rejected her.

When Mayor Worth ignores the warnings of his Deputy Mayor, Edwina Watts, and proceeds with his plan to put his name in lights, Edwina is accidentally electrocuted and becomes the villainess Stunner. She threatens to unleash her raging electrical current through every outlet in the city, turning household appliances into deadly bombs.

Flash Point escapes from jail and it's Black Scorpion who becomes his next target. He captures her and learns that she is really Darcy Walker. He prints out her photos and Darcy soon finds herself in hot water and realizes that the only way to elude the authorities is to clone herself.

Darcy befriends an out of work fireman who is still trying to save lives. One night a freak accident with flammable chemicals gives Adam the power to start fires rather than stopping them. His mind goes awry and he renames himself Inferno.

25 years ago Ben Tickerman was sent to prison for a crime he didn't commit. Now, Tickerman is out of the slammer and renaming himself Clockwise, seeks revenge on those who sent him to jail.

Darcy befriends a new male cop (Detective Steve Rafferty) who is determined to capture the Black Scorpion, not knowing her true identity. Meanwhile a former cop is forced into an early retirement, but when an urban militia group costs him his right arm he seeks revenge. With new armor and a cannon where he lost his arm, he renames himself Firearm and goes on a deadly rampage.

Black Scorpion's long lost enemy The BreathTaker is back and this time he's got a new special gas. Breathtaker is resuscitated by the mad-but-benign Dr. Phoenix, and his lovely, buxom assistant, Ariana. Unfortunately for the populace of City of Angels, Breathtaker plots to torture the city with a nerve gas that brings their fears to life through dangerous hallucinations.

Dr. Ariel Haze is an environmental scientist obsessed with stopping pollution. One night she becomes in contact with some chemicals and becomes a human smog. Renaming herself Pollutia, she plots to erase all humankind.

Darcy and Steve team up while hunting for a weird character called Cupid. Meanwhile Darcy's ex-boyfriend Adam Burns, a.k.a. Inferno, and Steve's ex-girlfriend Minerva Stone, a.k.a. Medusa, team up to plot against Black Scorpion.

When a new female detective gets suspended after Darcy backs up a suspect brutality against her. The Cop dons a white costume and becomes a dark vigilante known as The Angel of Death. Darcy soon finds herself not only protecting her alfter ego Black Scorpion but also protecting her enemies as well when The Angel of Death plans to kill the supervillians.

Another one of Black Scorpion's long lost enemies is back. The Gangster Prankster has a new bag of tricks as he re-unites his old gang.

Ricky "the Rocket" Blade is injured by his team-mates after he refuses throw a game. Paralyzed and unable to walk. Ricky thinks his life is over. until a physiscal therapist offers him a metalic armor that will allow him to walk. Ricky takes that offer. Renaming himself slapshot Ricky plans to elimate his former teamates and anyone who tries to stop him.

Dr. Sarah Bellum plans to shelter the homeless by creating a virtual reality world for them to live in. When Mayor Worth rejects her proposal, she becomes MindBender, a sexy VR specialist who uses her powers of virtual persuasion to create fantasies that transform into reality.

The Crow: Stairway to Heaven