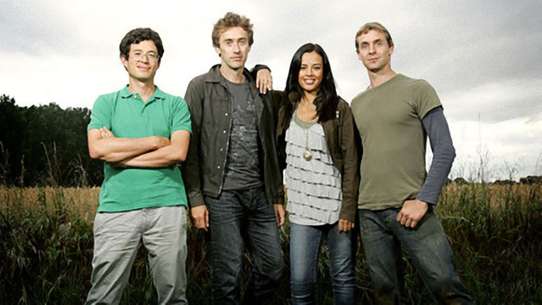 The BEST episodes of Bang Goes the Theory

In the second episode of the science series, Liz hits the beach with the RNLI to experience the power of rip currents; Dr Yan attempts to demonstrate evolution by drawing a couple of lines; and Jem is back in the workshop, turning everyday scrap into gold.

Liz Bonnin, Dallas Campbell and Jem Stansfield take on more scientific challenges. Engineer Jem becomes a crash test dummy to discover how much g-force his body can take, while scientist Liz gets the Olympic treatment for Sport Relief. Dallas enters the weird world of the atom, and roving reporter Dr Yan Wong dives into a shark tank to explain why there are no long snorkels.

Dallas attempts to find out what causes tooth decay and gum disease. Yan explains the reason why refreezing food is not a good idea. Jem takes a look at some new research that claims electric lights can play havoc with the way we sleep.

Jem Stansfield witnesses the power of rockets as he spends time with the team working on the Bloodhound land-speed record project. Dr Yan Wong re-creates an ancient Greek experiment to measure Earth's circumference with two sticks, and Dallas Campbell goes in search of a robot he can call his own.

Liz investigates an increasingly common and unwelcome guest - the bedbug. Meanwhile, Yan explains why statistics are not to be trusted, and Dallas goes stargazing in California.

Liz looks at the controversial science of genetically modified crops in Hawaii. Dallas tries to remedy Jem's dust allergy by making him eat worms. And Dr Yan tries to shatter a glass by playing the violin.

Jem Stansfield explains lasers on the 50th anniversary of their invention, Dallas takes part in a Citizen Science experiment and Dr. Yan calculates the speed of light.

The team start by looking at the science behind the recent volcanic ash crisis that grounded Europe's planes. In the rest of the programme, Jem Stansfield visits a power station to explain why steam is still powering the country, while Dallas hits the slopes to discover the science behind skiing.

Dallas goes supersonic and meets the team behind a 1000mph car. Jem looks at what makes stuff sticky and makes homemade glues to test out on the other presenters and Dr Yan puzzles commuters with an optical illusion.

It is 60 years since a British doctor first made the link between smoking and lung cancer, and now it seems we may finally be starting to win the battle against nature's most vicious disease. Liz Bonnin explains how cells turn cancerous by blowing high-tech bubbles. Jem Stansfield builds his own radiotherapy gun, Maggie Philbin looks at the latest drugs, and the team are joined by Ground Force's Tommy Walsh, who looks into screening for bowel cancer.

Dallas investigates a potential global helium shortage, Dr Yan tests shoppers on how much they know about radiation, and Liz tries out the new airport security technology that can see beneath your clothes.

Air pollution is now second only to smoking as a killer in the UK, yet as a nation we are failing to meet targets on reducing emissions. The team investigate what air pollution is, where it comes from, and what it is doing to us. Jem Stansfield reveals that cleaner-looking air doesn't necessarily mean healthier air; and he demonstrates why modern diesel engines, in spite of their growing green credentials, may be bigger polluters than petrol. Maggie Philbin follows some typical commuters to reveal how much pollution we all actually breathe in, and she also finds out how a soap powder additive could turn all our clothes into personal pollution filters. And while people continue to worry about the health of their lungs, Liz Bonnin investigates new research that suggests it may be our hearts that are more at risk from air pollution.

With the recent horsemeat scandal fresh in our minds, the team ask how much we really know about what's on our dinner plate, and investigate the surprising world of food technology. Maggie finds out how scientists use DNA to identify what is in ready meals, and why the horsemeat scandal wasn't detected earlier; and she asks how much of our food is actually a product of the chemistry lab. Liz investigates how flavour scientists have been fooling our taste buds for years, and finds out what makes meat taste of meat; while Jem explores the science of suspended animation that keeps old food looking deceptively fresh on the shelf.

In this episode, the team explore the new era of personal medicine. With people taking ever bigger roles in their own health care, for the first time you can be in the driving seat when it comes to medicine. Maggie Philbin explores the rise of online diagnosis tools, putting them to the test against a real doctor, and also reports on the revolution in personally tailored medicine that is giving new life to young asthma sufferers; Jem Stansfield tests out the very latest in self-monitoring gadgets as he investigates the world of self-tracking; while Liz Bonnin finds out how a rare genetic condition that causes blindness can be corrected by a new technique that actually alters your genes.

In the second episode of the series, Liz follows two couples undertaking IVF and looks at the new research that may dramatically increase success rates. Jem attempts to become the first man to go 360 degrees on a playground swing. And Dr Yan confuses shoppers with the help of a very special mirror.

Liz Bonnin, Dallas Campbell, Jem Stansfield and Dr Yan Wong take on more experiments and scientific challenges. Jem hits the furnace to make steel and discovers how it built the modern world, while Liz investigates whether science can help humans live forever. Dallas turns into a dolphin with the help of the latest US technology, and Yan challenges museum visitors to make fire out of thin air.

Jem Stansfield takes to the air with the Royal Navy to explain how helicopters work, while Liz Bonnin puts brain training devices to the test. Dallas Campbell investigates the new space entrepeneurs in California, and Dr Yan Wong shows how to melt glass with a microwave.

The team take on more popular science. Liz Bonnin investigates recent research into the magnetic qualities of cows, while Dallas Campbell puts psychological priming to the test. Dr Yan Wong demonstrates why rockets work in space with the help of an underwater firework, and Jem Stansfield tries to put the programme in the space race.

Dallas hits the streets to discover what makes us happy, while Liz travels to Norway to investigate the latest technology to combat climate change. Jem puts himself in harm's way in avalanche country, and Dr Yan sets an optical illusion challenge to a WI meeting.

Engineer Jem tries to smash a land speed record with the help of a single fire extinguisher, a go kart and a well oiled spanner. In an experiment that you really shouldn't try at home, Jem builds himself a go-kart attached to a staggeringly powerful fire extinguisher that uses the laws of physics to fire him along a race track and into the record books. With oil prices rising every year, Dallas takes on an issue that concerns all of us. What will we do when the oil runs out? At the moment, across the globe, we use 85 million barrels of crude oil every single day but the fact is that our oil supplies can't last forever. With Richard Branson as one of his guides, Dallas looks at the future of oil explorations, and tells us what this means for our wallets. Liz goes behind the scenes of the real CSI (the Forensic Science Service) to meet the scientists working with the police to solve real crimes. With one crime, three suspects and no DNA evidence, Liz launches her very own forensic investigation to catch the bad guy. Bang Goes the Theory is co-produced with The Open University. For more ways to put science to the test, go to www.bbc.co.uk/bang and follow the links to The Open University.

In this episode, the team look at Britain under pressure. With the population of the UK topping 63 million, what are scientists and engineers doing to reduce the strain on our ageing infrastructure? Maggie heads 50 metres beneath the River Thames to see how the UK's biggest ever water engineering project aims to prevent raw sewage flowing into the Thames every time heavy rain overwhelms London's sewers; Liz explores the possibilities of urban underground farming, and also finds out how engineers protect us from smells like landfill; while Jem investigates a new idea that could help to tackle the problem of overcrowded graveyards.

In the latest of the series that puts science to the test, the team takes on more fun experiments and challenges. Dallas Campbell traces the incredible global journey of 30,000 indestructible plastic ducks, while Liz Bonnin goes on manoeuvres at the bottom of the Baltic Sea in the Royal Navy's latest search and rescue sub. Dr Yan Wong challenges the people of Cardiff to take on the might of friction, and Jem Stansfield uses two domestic vacuum cleaners to climb up the side of a building.

In this second episode of the series, the team take on more scientific challenges. Engineer Jem Stansfield designs, builds and then puts his life in his hands by tying himself to a water jet pack. Zoologist Liz Bonnin finds out if insects are the future of food, science-mad Dallas Campbell investigates NASA's latest attempts to prove there is life beyond Earth, and roving reporter Dr Yan Wong challenges the people of Cambridge to blow up a bin liner.

Jem Stansfield builds a vortex cannon to pick up where the big bad wolf failed to blow over a house of brick; Dallas Campbell takes on the big brother technology that will track every one of us simply by the way we walk; Liz Bonnin confronts the controversial US scientist working to create the first generation of artificial life; and Dr Yan Wong tackles unsuspecting shoppers with a simple question: how do you cook an egg with a piece of newspaper?

Jem Stansfield puts spider silk - the strongest material in the natural world - to the test; Liz Bonnin joins the RAF's flight school to find out the truth about multi-tasking; Dr Yan Wong experiments with sodium acetate; and Dallas Campbell dusts off his top hat to reveal the secret science of magic.

Once Upon a Time... Life

Once Upon a Time… Man

The Joy of Painting

Once Upon a Time... Space

Once Upon a Time... The Discoverers