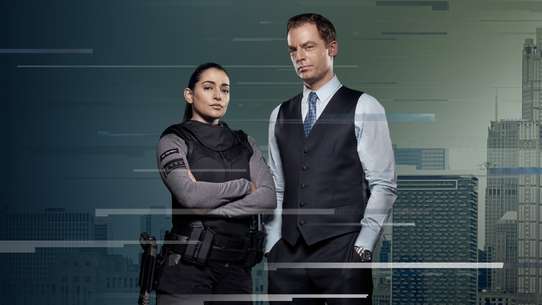 The BEST episodes of APB

Every episode of APB ever, ranked from best to worst by thousands of votes from fans of the show. The best episodes of APB!

The Chicago Police Department is spiraling out of control amid sky-high crime, officer-involved shootings, cover-ups and corruption. After witnessing a violent crime first-hand, genius tech billionaire Gideon Reeves decides to do something about it, putting up millions of dollars of his own money to take over the troubled 13th Precinct and reboot it as a private police force – better, faster and smarter than anything seen before.

In the series finale, when Gideon is blamed for recent terrorist attacks, he and Captain Conrad work fast to track down the real culprit. But Gideon finds himself in a predicament, when Danny continues to use his technological skills to disrupt the city, leaving Murphy, Ada and the rest of the squad struggling to find a way to stop him.

Gideon's life is threatened, so Conrad sends him home to get away from District 13. When the men after Gideon find him, Murphy and Gideon hide in his secret lab, where they become trapped. As they search for a way to escape, Murphy learns the main reason these men are after Gideon.

After tech billionaire Gideon Reeves witnesses his best friend's murder, he takes charge of Chicago's troubled 13th District and reboots it as a technically innovative police force, challenging the district to rethink everything about the way they fight crime. Gideon knows if he's going to change anything, he'll need help, which he finds from Detective Theresa Murphy, an ambitious, street-smart cop who is willing to give Gideon's technological ideas a chance. After Gideon launches the APB app, allowing citizens to immediately alert the police of a crime, downloads of the app spike, and Gideon realizes his work is just beginning.

An FBI agent seeks Murphy's help when he learns his informant's life may be in danger. Gideon not only assists Murphy with the investigation, but makes a decision that could make or break his company. Meanwhile, the past comes back to haunt Ada.

After a man goes to extremes to get justice for his daughter, Gideon and Murphy use new technology to investigate the case. Meanwhile, the assistant state attorney continues to interrogate Gideon and his ideas for the 13th district.

When a serial rapist is on the loose, Captain Conrad orders Gideon and Murphy to find the perpetrator before there are any more victims. However, after Gideon's new technology fails to prove helpful for the case, the team is forced to turn to an unexpected ally for help. Meanwhile, Ada struggles with a threatening part of her past and worries that if it resurfaces, it may be harmful.

After another fire hits one of the gang-run buildings, Murphy and Gideon find out that the cause is much worse than an act of gang retaliation. Meanwhile, Goss is unsure about Brandt's old service buddy, after he's accused of assaulting a customer at the bar where he's a bouncer. Goss seeks the truth and Gideon is faced with an important decision.

When Murphy and Ada team up to help solve a murder, they discover that the killer's next target is Gideon. After learning his safety's at risk during his company's huge technology convention, they utilize a high-tech scanning system to try and track down the killer.

After armor-piercing bullets are found on the black market, the team decides to send Officer Brandt on an undercover mission to catch the criminals selling them. But when the mission goes awry, the squad utilizes a high-tech jacket to help track down Brandt and bring him back to safety. Meanwhile, a task force led by Murphy's ex-husband threatens Gideon's future.

When Gideon accompanies Murphy on a ride-along to see the impact of his reforms, they run into a pharmacy robbery that results in the injury of a child. Gideon vows to get involved and tests out a new drone, but after that fails, he is inspired by an unlikely source to create new electric motorcycles to help find the suspects. Meanwhile, Murphy is disturbed when she hears that someone close to her is the leader of a new project that could take down Gideon's plans for the 13th district.

A group of robbers kill a security guard who was a former police officer and who, before his death, used the APB app. Meanwhile, Gideon redesigns a feedback chair - previously utilized in the aerospace industry - for use in the investigation room, and Murphy learns that her ex-husband, Assistant State Attorney Scott Murphy, may be watching them.

After Gideon's father finds himself in trouble, he turns to Gideon for assistance. Meanwhile, Brandt and Goss work to track down the mastermind behind a huge grand theft auto case.