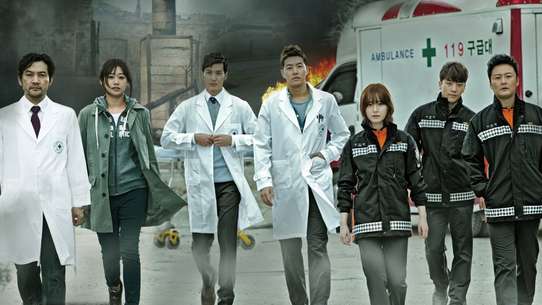 The BEST episodes of Angel Eyes

Every episode of Angel Eyes ever, ranked from best to worst by thousands of votes from fans of the show. The best episodes of Angel Eyes!

Yoon Soo-wan and Park Dong-joo were each other's first loves but were forced to separate due to painful family circumstances. Soo-wan, who had been blind, eventually undergoes an eye transplant surgery that restores her sight. Twelve years later, Soo-wan now works as an emergency rescue worker, while Dong-joo is a surgeon. They meet each other again.

Dong Joo goes to get back Soo Wan, who learns the true meaning of goodbye.

The police chief attempts to get the detectives off the hit-and-run case. Dong Joo learns the true nature of his mother's death.

The detectives traps the culprits with new evidence. Ji Woon takes action, and Dong Joo and Soo Wan handle with the aftermath.

Soo Wan misses another chance to regain her eyesight on her birthday. Miss Jung Hwa gets into an accident.

Soo Wan finds out the identity of her eye donor and is devastated. The rest of the truth slowly unveils itself.

The families officially break off the engagement. Soo Wan discovers one of her father's secrets.

Dong Joo starts to believe the truth about his mother's death, and wants to leave Korea with Soo Wan.

Soo Wan leaves Dong Joo behind to find herself.

Soo Wan breaks up with Dong Joo. Another side of the accident unveils itself.

Ji Woon learns the true extent of his mother's involvement in the murder.

Seeing how happy Soo Wan is, Dong Joo keeps his identity a secret. Soo Wan struggles to figure out why the new doctor is so familiar.

Ji Woon wants to bring Soo Wan and Dong Joo together as friends. Meanwhile the two disguise their feelings for each other with hostility.

Dong Joo starts working at the EMT with Soo Wan. The couple tries to tell Ji Woon the truth.

Dong Joo comes back as a doctor after years abroad. Soo Wan has moved on and become a stronger, different person.

Soo Wan learns the truth and confronts her father. Director Yoon's illness catches up with him.

Their lives connected by a tragedy, Park Dong Joo falls for the blind and lonely Yoon Soo Wan. It's a beginning of an innocent and pure love.