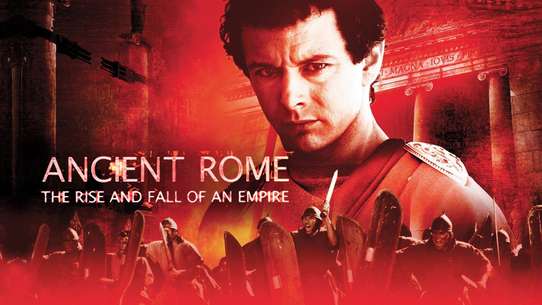 The BEST episodes of Ancient Rome: The Rise and Fall of an Empire

This dramatised documentary series tells the story of the rise and fall of Ancient Rome through the six key turning points. Factually accurate and based on extensive historical research, it reveals how the greed, lust and ambition of men like Caesar, Nero and Constantine shaped the Roman Empire. It describes how Rome destroyed Carthage, was conquered by Caesar, how it suppressed the Jewish revolt, and converted to Christianity. CGI is mixed with compelling drama and spectacular live-action battles to tell the definitive television story of how the Empire was formed, how it achieved maximum power, and why it eventually failed.

Since the young Tiberius Gracchus assisted his famous father and namesakes funeral pile, he is destined for even greater fame. The final victory in Rome's 120 year long Punic wars against Carthage, its greatest ever Mediterranean rival, brings him immense glory and the rich unseen wealth, but almost nothing trickles down to the destitute, who keep flocking to the city's squalid quarters; the rich patricians yest removing the military threat of Carthage also removes the best control on them. He learns many veteran families lose everything, even their land, which is taken by the rich. Now he joins the army against a Spanish tribe, the Numantines, which manages to encircle the 20,000 legionnaires and refuses to negotiate with consul Mancinus, but takes the word of Gracchus, for the sake of his father who concluded an honorable peace with them; the troops return, their families rejoice but the senate blames the commanders for a disgraceful surrender and sends Mancinus back stark-naked in chains to denounce it. Tiberius uses his popularity to stand for the office of popular tribune, hoping to counter Nasicas extremist line in the senate. After a political alliance trough marriage with senator Pulcher's daughter Claudia he is elected one of the ten tribunes, and proposes in the legally legislative popular assembly a land reform, without the traditional seeking of senatorial consent, to return the land of destitute citizens. His former friend and colleague Octavius vetoes it, so no vote can be taken; now Tiberius systematically vetoes all court and other public proceedings- Octavius is deposed, the land reform is carried, making him an apparent competitor for absolute leadership. His senatorial enemies now pretend he craves a royal crown and keeps the lands meant for restitution to break his popularity and demand his execution after his tribunician term- Rome risks a civil war, he counts on the people to re-elect him (illegally); in stead a murdering mob kills him and his

In the spring of 66 AD, target-failure by the tax collectors in the province of Iudea makes the Roman garrison turn on them and even the Temple in Jerusalem- a bloody revolt then ousts the governor, installing an independent regime headed by Hanan Ben-Hanan. After a 30,000 strong army was defeated and the whole 12th legion wiped out, emperor Nero, who fears the unprecedentedly serious rebellion may spread throughout the empire, sends upon the retired veteran general Vespasian, who was banished from court for falling asleep during his endless poetry, to take command, assisted by his son Titus Flavius, also a professional officer, from Greece. He fears the Jerusalem defenses and decides to terrorize the rest of the country instead. Ben Hanan tells Josephus ben Matatia, whom he puts in charge of defending Galilea, there is no hope of winning a long war, the goal is to get concessions after a good resistance. A quarter of the Roman troops is approaching, both from Antioch and Alexandria, soon slaughtering tens of thousands of Jews, enslaving even more, so refugees flock to fortifies sites as Josephus' stronghold Jotapata, which he hopes to defend about 50 days. After 47 frustrating days of classical siege Vespasian, shot in the foot, orders Titus to show initiative- a gate is overran by surprise, the fort penetrated, most defenders slain; Josephus' hard core hides in the water well; when negotiations are offered, the others refuse, so Josephus proposes every third man to stab his neighbor, and survives with one friend, Yaakov, so they alone emerge. Josephus predicts Vespasian will soon be emperor as Rome needs a stronger man, and Titus remembers his amazing predictions. The Zealot troops are gradually driven to Jerusalem, where the fanatic Yohanon takes charge and challenges ben Hanan who still hopes a deputation can get a peace from Rome, but is slain in the Sanhedrin, starting two years of Jewish factional strife. Meanwhile Nero is toppled, and Vespasian emerges from

Under emperor Honorius Rome was still the nominal, eponymous capital, but his seat of government was the palace in Ravenna, an Adriatic port closer to the borders under constant threat as irresistible attacks from the east by nomadic peoples like the Huns caused a chain-reaction of westward migrations, forcing people like the Goths (who lived by the Black Sea) to invade the Roman imperial territory. Stilicho had allowed them to live there, but after his disgrace and execution on the instigation of Olympius, the new imperial chief councilor, all 'barbarians' were slaughtered or fled to such remote regions as the mountainous central European province of Noricum, where the Goths await the final assignation of land they were promised; when king Alaric realizes that is no longer Honorius' intent, he decides not to attack his naturally sheltered residence in Ravenna, but to lay siege to Rome itself, no longer properly defended as the imperial army is overstretched by rebellion in Gaul and invasions by other barbarians, especially across the Rhine. The idea was first to extract the treasures of Rome and then the promised land, a rich peace, but the gold and silver brought by a senatorial delegation are less then hoped and Honorius never assigns the land. Olympius makes a failed attempt to bring reinforcements once Alaric had retreated, but his army is slaughtered, causing Honorius to disgrace him in favor of Iovius. Alaric tries to make Honorius concede by 'strongly suggesting' the senate to declare its own 'hero' Attalus the new emperor of Rome, but Jovius soon gets him discredited with the Romans by cutting the food supply to the city from its main source, North Africa. After a peace negotiation is ruined by Sestus, a Gothic former rival of Alaric who became a Roman general but fell out of favor, who on his own attacks Alarics delegation, the king survives but can no longer resist the urge of his own people for action, so he has potential coup leader Berig executed and f

Nero witnesses the Great Fire of Rome from his villa in Antium and hurries back to the capital to try to control the fire and save lives. Seneca tells him to "rule like the gods" and he vows to build an inspirational city of marble and stone on the ruins. The expense threatens to bankrupt the empire and Tigellinus is sent to rob the temples, turning many in the senate against the emperor. The Pisonian conspiracy to assassinate Nero and have Gaius Calpurnius Piso proclaimed as emperor is revealed, and the conspirators, including the trusted Seneca, are executed. Nero inaugurates the biggest arts festival in Roman history with himself at the top of the bill. In the furious throes of increasing megalomania he kicks his wife Poppea to death. A now isolated Nero leaves Rome in the hands of the Senate as he sets out on a debauched tour of the empire. With his reconstruction still incomplete as the money runs out, Tigellinus is ordered to initiate a campaign of forced suicide to dispossess the richest men in the empire. A rebellion rises up and the Senate sentences the fleeing Nero to death, his suicide bringing the Julio-Claudian dynasty to an end.

At the close of the Gallic Wars, Gaius Julius Caesar finds his army encircled by a massive force of Gauls but wins a decisive victory with a brilliant counterattack at the Battle of Alesia. An inspiring speech to his troops, promising to rescue Rome from its corrupt rulers and restore it to its people, raises opposition from Senators Cato and Marcellus. Caesar refuses to disband his army before crossing the Rubicon, plunging the Republic into civil war and turning his deputy Labienus and old friend Pompey against him. Caesar captures Rome unopposed after Pompey is forced to withdraw his vastly outnumbered legions and the senators and people flee.

Emperors Diocletian's 'Tetrarchy', a hierarchic system of four emperors, fails as they soon fight each-other. Autumn 321, co-emperor Constantines army prepares north of Rome to defeat his tyrannical western rival Maxentius. Clerk Lactantius, whose writings are the major source for this film, tries to convince Constantine to put his faith in the secretive slave religion, Christianity; something in the sky, perhaps a striking meteorite, is taken as a divine sign; he adopts the PX-emblem -crossing Greek letters chi and ro for Christ- to mark his troops' shields, even though the men are reluctant to betray the pagan gods. Maxentius, who just received major reinforcements, bringing his strength to 75,000, lays a trap at the Milvian bridge over the Tiber, but it fails and he drowns. Constantine promises his reign will liberate the people and restores goods and senatorial authority, making his entry a true triumph. Now he turns his attention to the easter half of the empire, and marries off his sister to emperor Licinus, consecrating the final division in two Roman empires, not four, by the treaty of Milan, with a proviso of religious tolerance. In 315 Constantine abandons pagan worship, starts building churches, converting to Christianity in all but name; the senatorial majority conspires against him with Licinus, but traitor Bassianus' attempt at Constantine's life fails. A long war for the soul of the empire follows, till in 324 the raised Christian standard seemingly topples the decisive battle. Licinus' surrender reunites the empire under Constantine. The church council of Nicaea agrees in 325 a creed of the Christian faith and Licinus is strangled. During twelve more years he establishes the new, Christianized empire.